When you tick off the reasons why someone would live and work in Door County — the beautiful landscape, stress-free commutes, great public schools, safety, laid-back lifestyle — competitive wages and salaries aren’t on the list for most job sectors. 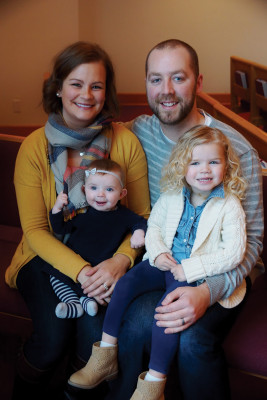 Jordan and Justin Burress with their two daughters, Quinn and Avery. Photo by Suzi Hass.

In nine of 12 job sectors listed by the Wisconsin Department of Workforce Development’s 2013 Door County Economic and Workforce Profile, Door County workers made fewer than 75 cents on the dollar for the same sectors in the rest of Wisconsin.

In fact, the only sector where Door County workers fared as good or better than the rest of the state was leisure and hospitality, a sector where the average annual wage in Door County is just $16,071 and usually includes few, if any, fringe benefits.

Anyone who had a conversation with a restaurant owner, innkeeper or shopkeeper last summer knows that even the tourism industry is struggling to fill entry-level positions which were once gobbled up by local teens and college students. The supply of those workers has dried up over the last two decades as the county’s population has aged rapidly, leaving fewer young families to replenish the pool of young workers.

After a surge that added 4,923 people in the 1970s, or nearly 500 people per year, the county’s population has been almost stagnant for more than three decades. Much of the growth of the 1970s came in the form of young families and entrepreneurs aiming to capitalize on the growing tourism industry or fleeing the corporate grind in the Midwest’s struggling urban centers. But since 1980 the county’s population has grown by only 2,737 people, or 78 people per year.

Part of this is owed to the fact that today’s young adults are drawn more to cities than at any point in history, eschewing even the suburban lifestyle in favor of the energy, walkability and culture of the city. More than four of every five Americans live in urban areas.

In 2014 Time Magazine proclaimed that the “new American dream is living in a city, not owning a house in the suburbs.” David Crowe, the chief economist for the National Association of Homebuilders, told Time that priorities for young adults had shifted.

“The 25- to 34-year-old age group is focused on living near their peers,” Crowe said. “They want to be socially engaged and live near work. They want to reduce their automobile use. All of those things aim at high-density, urban-type living.”

In this context it’s more difficult to draw young adults to Door County than ever before. Even those with strong ties to the peninsula and an inclination to return, the rising costs of college leave many saddled with hefty student loans that a Door County salary simply can’t pay off.

For married couples the challenge is doubled. An early career worker is fortunate if they can find a job that puts their degree to use in Door County, but the chances of both spouses finding jobs in their field with growth potential is slim.

Justin and Jordan Burress are an example both of how the county can lure young adults, but also the struggle they face once they arrive. Justin grew up in Sister Bay and was fortunate enough to land a job at his alma mater, Gibraltar Area Schools, in 2013. The family decided to move home.

“We always wanted to get back here, but we both had full-time jobs,” says Jordan, who worked as a recreation director for the City of Platteville before moving to Door County. They relished the opportunity to live in Door County and be close to family, but for Jordan it meant putting her career on the backburner, going from a salaried job with the city to part-time, hourly options in Door County. “I don’t necessarily feel that folding clothes is putting my degree to use, but I’m able to take care of my kids, and I’m happy doing what I’m doing.”

Jordan now works part-time for the Peninsula Pacers, and feels that at least makes some use of her hard-earned degree.

While the challenge for newlyweds is difficult, it’s no easier for young single workers. With the population of young adults dwindling, the dating landscape is sparse.

“We have young friends here who say, ‘It’s great here, I have a job, but who am I going to date? How can I stay?’” Jordan says.

To come home requires one to sacrifice salary, career and putting dreams on hold.

But charity may be having a greater direct impact on the job quality problem than almost any other it addresses on the peninsula, not by raising funds to support programs or education, but by providing those jobs.

Bret Bicoy, executive director of the Door County Community Foundation, said in a 2012 review that 3,600 full-time equivalent jobs in Door County are supported by nonprofits and their spending on the peninsula.

“Charity is probably a bigger economic engine in our community than in any other county in Wisconsin,” he said. “Think about our tourism sector. Northern Sky Theater, Peninsula Players, the Door Community Auditorium. These are charities. The hospital is a nonprofit. That’s the 500-pound gorilla of an example.”

The dozens of charities in Door County require executive directors, financial officers, marketers and development directors, all jobs that are attractive to those with college degrees or professional experience.

But an influx of charitable jobs can’t be expected to provide the number of quality jobs Door County needs to turn around its aging trend. So where can Door County turn to create a stronger, more diverse base of well-paying jobs with opportunities for growth?

It won’t happen overnight, and it’s not going to happen by attracting a single large manufacturer to the peninsula.

“So many of these larger manufacturing firms are downsizing and closing,” says Gary Green, a professor of sociology at the University of Wisconsin — Madison. “Even if you could incentivize one to move to the area, it might be gone or be lured elsewhere a few years down the road. States fight to poach each other’s businesses, and the benefits of doing so get smaller and smaller.”

Big box stores such as Walmart and Target bring large numbers of jobs, but most are low-wage, low-benefit positions, and the business profits funnel up to corporate headquarters far from Door County.

“There is a higher percentage of small businesses in rural areas because there are fewer opportunities, so people turn to self-employment to get by,” he said. “Finding ways to nurture that is probably the most cost-effective thing a community can do.”

Green points to low-rent business incubators, shared processing spaces, and micro-enterprise loans funded through philanthropy as promising models. “We’re talking about loans of $10,000, sometimes more, sometimes less, that can help someone get started or expand,” he says.

“Another suggestion to spur entrepreneurs would start even earlier, by running businesses within schools such as delis, restaurants or small retail that would give business skills to high school students and possibly retain them in your own communities.”