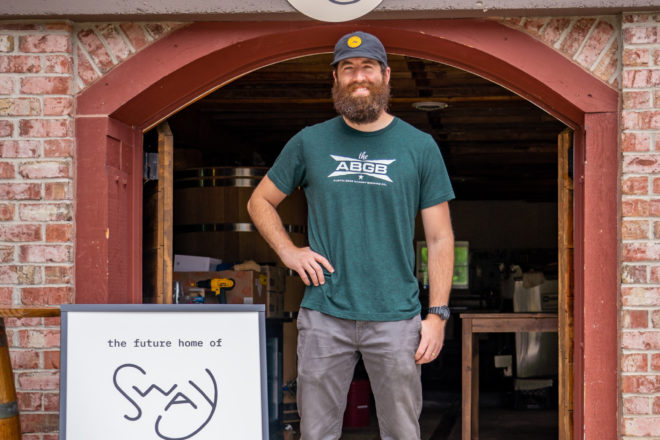 If you think the craft-brewing scene was just a fad of the previous decade, think again. The Brewers Association has reported that the number of craft breweries across the country nearly doubled between 2015 and 2021. Also not to be dismissed, sales of craft beer increased by about 8% from 2020 to 2021. And although Door County may be better known for its orchards and beaches, supper clubs and wineries, the craft breweries popping up around the area are carving out a thirst-quenching niche.

Take, for example, Sway in Baileys Harbor. The latest beer project from Matt Sampson of Hacienda Beer Co., Sway started brewing this year with one mission: bringing beer back to the basics while being anything but basic.

Sampson, who has been involved with the local craft-brewing scene since 2017, said his latest project stems from the progression of his interest.

“I’ve followed the craft-beer curve, where I got into craft beers hard, and then I really got into IPA,” he said.

His journey first began when he was pursuing his PhD in chemistry at the University of California-San Diego and began dabbling in homebrewing with a few of his roommates.

“I was able to brew with them to learn some of the ropes,” Sampson recalled. Back in Chicago, he continued to explore the beer industry, shooting photos and writing stories for a beer website called Good Beer Hunting that profiled unusual breweries around the country. When he and his wife, Brooke, moved to Door County in 2016, he considered opening his own beer-related business.

“Either a brewery or beer bar,” he said.
Instead, Sampson connected with Door County Brewing Co., which was exploring a new experimental project that would become Hacienda Beer Co.

“They reached out to me to use some of my aerial drone photographs on their seasonal saison bottle labels,” he said. “At the time, Hacienda seemed exactly like the brewery I wanted to start, and I sort of pitched them a full-time job after that first meeting.”

Sampson came on board at the start of 2018 as the brand manager and quality manager – roles that eventually allowed him to experience every area of the brewery and aspect of the beer-making process. That time, he added, let him not only gain the necessary business experience, but further hone his own brewing mission and style as it has evolved.

But don’t confuse the term “easy drinking” with boring. He has plenty of plans to experiment with flavor and style.

“We have all these oak tanks here,” he said pointing to the cellar space below Heirloom Cafe & Provisions in Baileys Harbor – the same space where Door County Brewing Co., Hacienda’s founder, started in 2017.

In addition to traditional lagers, “I’m going to be doing a lot of oak-aged saisons that have some different fermentation profiles,” Sampson said. “It’s going to blur the lines between what people know and what people don’t know. But it’s all focused on less than 5.5% alcohol.”

The intentional focus on brewing lower-ABV beers, or “session beers,” plays into Sampson’s goal to create the perfect summer beer: something that’s light and refreshing and can be enjoyed throughout an afternoon without causing anyone to stumble home at the end of the day.

“Beers that are refreshing, that you can drink a few of them and it’s not going to hit you over the head,” he said. “I really like drinking beer, but after work, I can’t drink two 7% or 8% beers if I want to feel good the next day.”

Sampson also wants to create a beer that people can feel good about drinking: something that connects local growers and locally sourced – and sometimes even foraged – ingredients.

“I played around with a lot of foraged ingredients working for Hacienda, so I want to do the same here,” he said.
Naturally grown yarrow, spruce tips and locally grown fruit are all on the ingredient list as well. To Sampson, the continued popularity and presence of the local craft breweries is a continuation of the local or “slow food” movement.

“It’s the broader idea of knowing where your food – and in this case, beer – comes from,” he said. “It’s knowing the brewer that made it.”

Sampson hopes to offer counter service of his first brews by mid-July, serving directly from the Sway beer garden. He also plans to have at least six taps available, and eventually some bottles and cans for people to take along with them to the beach or a cookout.

“Some of my best experiences drinking beers are just around friends,” Sampson said. “We’re not fixated on what we’re drinking; we’re just having a good time. That’s what I’m trying to create here.”