Walker says Republicans need to “focus like a laser beam” on helping Sen. Ron Johnson win re-election, but he isn’t making the same call to action for presumptive Republican presidential candidate Donald Trump. Walker spoke for more than 30 minutes at the Wisconsin Republican Party convention on May 14 and didn’t mention Trump once. Instead, like most of the speakers at the convention Walker is focusing on Johnson’s re-election campaign against Democrat Russ Feingold. Walker says, “That needs to be our clear focus. That’s where we can have the biggest impact, not just in the state of Wisconsin but the nation as a whole.”

Ribble released the following statement commending Treasury Secretary Jacob Lew for the decision to feature Harriet Tubman on the newly-designed $20 bill in 2020: “Our nation was built by the strong, principled people who stood up and fought for what they believed. Harriet Tubman is a lesson in courage, in generosity, and in the fight for equality that we can all be very proud to share with our children and grandchildren. I am glad to see her honored on the $20 bill and will look forward to seeing the final design in 2020, on the 100th anniversary of women gaining the fundamental right to vote.”

Investments and reforms to improve our water infrastructure for our shipping economy on the Great Lakes and Mississippi, protect the Great Lakes from Asian carp and develop innovative clean energy championed by Baldwin, a member of the Senate Appropriations Committee, have been included in the FY17 Energy and Water Development funding legislation passed by the U.S. Senate. “I am proud to fight for smart investments to build a strong Made in Wisconsin economy,” said Baldwin. “In order for America to succeed and create new opportunities for growth, we need to invest in our Great Lakes and Mississippi River ports and in the next generation of energy innovation.”

Speaking at the May 14 Wisconsin Republican Party convention in Green Bay, Johnson compared the 2016 election to the Sept. 11 terrorist attacks, saying he is “panicked” about this “consequential” year. Johnson made the comments as he was telling the story of Flight 93 — the airliner that ultimately crashed near Shanksville, Pa., on Sept. 11, 2001. The crash occurred after the passengers attempted to overpower the hijackers rather than have the plane continue toward the hijackers’ intended target. “It may not be life and death, like the vote the passengers on United Flight 93 took, but boy is it consequential,” said Johnson, according to AP reports.

Johnson, a Republican elected in 2010, faces a rematch with former Sen. Russ Feingold, who previously held the seat. Michael Tyler, Feingold’s spokesman, assailed Johnson’s remarks: “It’s beyond bad taste for a sitting senator to compare a horrific national tragedy – one that unites all Americans – to his own partisan reelection.” 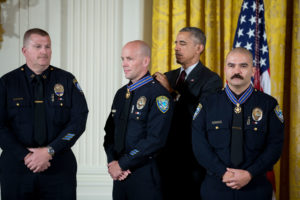 President Barack Obama awards the Medal of Valor to Officer Jason Salas, Officer Robert Sparks, and Captain Raymond Bottenfield of the Santa Monica College Police Department, Calif., during a ceremony in the East Room of the White House, May 16, 2016. The Medal of Valor is awarded to public safety officers who have exhibited exceptional courage, regardless of personal safety, in the attempt to save or protect others from harm. (Official White House Photo By Chuck Kennedy)