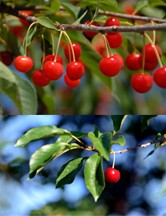 In a good production year, where the county can produce 12 million pounds of cherries, the boughs of trees are heavy with fruit. This year, production of cherries is anticipated at 700,000 pounds, and the branches are pretty sparse. Photos by Dan Eggert and Katie Sikora.

Wisconsin is looking to the federal government for help with this year’s fruit crop loss.

Governor Walker requested a federal agricultural disaster declaration for the state, which, if approved, would make low-interest federal loans available to farmers whose orchards and vineyards were hit by the weird spring weather.

But according to Tim Siehr, director of the USDA’s Kewaunee and Door County Farm Service Agency, most fruit growers wouldn’t take advantage of the deal.

That loss is a big one this year – Siehr estimates 95 percent of Door County cherries were lost because of weather. Buds opened during a warm spell in March, then were damaged by cold April temperatures.

Some of the cost of this season’s crop loss will be offset by the Noninsured Crop Disaster Assistance Program (NAP), a Farm Service Agency program. The NAP only pays 55 percent of the market price on portions of crop losses over 50 percent. That means if a producer lost his entire crop he’d only get 27.5 percent of its total value, hopefully enough to cover his operating cost for the year.

But having the state’s fruit and vine crop losses declared an emergency helps attract attention to the tart cherry industry, and it may help industry leaders get a better crop insurance policy in place for the future.

To complement this season’s low supply is the highest demand for cherries that Terry Sorenson, president of Wisconsin Cherry Growers Association and owner of Soren’s Valhalla Orchards just south of Sturgeon Bay, has ever seen.

“We’re seeing some cherries being sold on national labels now that we haven’t seen ever,” Sorenson said. Even Sun-Maid sells dried tart cherries, something Sorenson noticed during a recent trip to Pick’n Save in Sturgeon Bay.

High demand and low supply means higher prices, a lesson learned this year by local producers. Sigrid Slaby, manager of Wienke’s Market in Algoma, said she’s had to raise prices on cherry products twice this summer after a 44 percent increase in the price of raw cherries.

“The first increase didn’t seem to bother too much,” Slaby said. “I think it will hit with this new one – it’s going to be quite significant.”

Slaby has posted signs about the crop failure to explain to customers why prices have risen by over 40 percent.

Wienke’s sells homemade pie filling, jams, salsas and other products made from Door County cherries, but the market doesn’t deal much with fresh fruit. They’re still using cherries from last year’s reserve for processing and should have enough supply for the rest of the year.

“Our supplier has guaranteed us that we would have enough cherries to last until next growing season,” Slaby said.

Although the crop loss was staggering, the Wisconsin cherry market will survive. Sorenson expects 700,000 pounds will be harvested in Door County this year, exceeding earlier expectations of just 500,000 pounds. On a good year, local orchards have the potential to bring a 12 million pound harvest.

“There’s still going to be an ample supply of cherries in the county for the locals and visitors,” Sorenson said.

Wisconsin cherry growers are keeping their fruit in the state, which means other markets around the country will be harder hit. Sorenson said some producers are trying to get cherries from other countries, like Poland.

“The bottom line is that in this country we’re going to be somewhere in that 100 million pounds short,” Sorenson said.