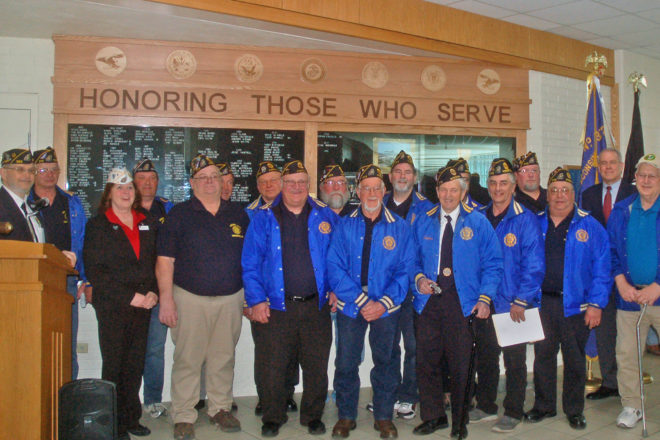 A Wall of Honor for Southern Door High School graduates who have served in the military was unveiled at a ceremony at the school on April 20.

“As of today, we have 273 names in there,” said Al Buechner, a member of the Forestville American Legion Post 372 who led the drive for the Wall of Honor. “Sixteen of those names are young female ladies who went into the service. That’s a pretty good accomplishment. Out of those 273 names, no one has lost their life. We all came back. Maybe not in good shape, but we all came back.”

Buechner told the audience who gathered for the unveiling, which included Laurel Clewell, commander of the American Legion Department of Wisconsin and a 36-year Army veteran, that it was a three-year process to make the Wall of Honor happen, and it all came about he said because Forestville resident Marijo Mueller saw a tribute to another school’s veterans when she attended a basketball game at a school in the Fox Valley.

Buechner then took the idea to Southern Door School District Superintendent Patti Vickman, who loved the idea, and to the members of American Legion Post 372.

Buechner said the biggest hurdle was coming up with the names, but thanks to several sources, including school yearbooks, they arrived at the first 273 names of students who went on to serve in the military since the school’s first graduating class in 1963.

“Probably the best source was word of mouth,” Buechner said. “Once we started putting names on the board, people would come by with more names.”

He said names will be added to the Wall of Honor as they are learned.

“If you know somebody whose name needs to go up, let us know,” he said.