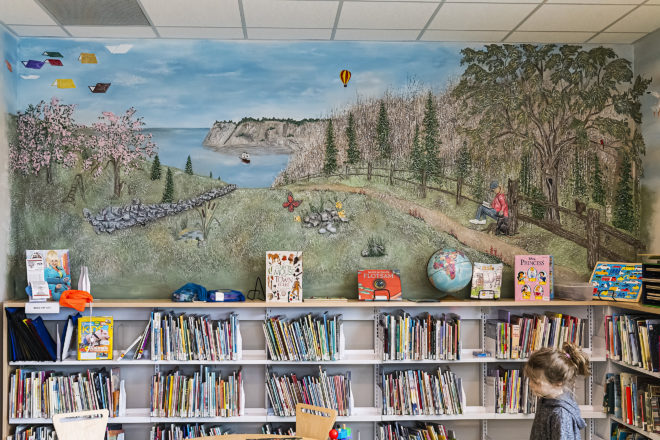 The new mural in the children’s library at the Kress Pavilion. Photo by Len Villano.

When you look at Randy Detjen’s work, you see that it begs to be touched. Images magically emerge from the wall, and your eye is drawn to find the subtle, yet unmissable details. Therefore, the perfect placement for his new mural is above a bookshelf – out of the reach of sticky little fingers – at the Egg Harbor children’s library at the Kress Pavilion.

But Detjen was quick to note that even if kids reach the mural, “Unless they take a baseball bat to it, the kids won’t hurt it.”

Instead of calling himself a relief artist, Detjen uses the term “wall sculptor.” He builds three-dimensional images on the surface of walls using a process that’s unlike that of classic relief artists. In relief work, the artist carves an image from the surface of a wall, taking material away from the wall to create the image. Detjen, however, adds a sculpted image to the wall.

In the latest addition to the children’s library, the 16-by-three-foot sculpture wraps around a corner and features whimsical images and nods to traditional Door County scenery: flying books, a pirate ship, a hot-air balloon and cherry trees.

The material Detjen uses to build up the image is a joint compound typically used to cover up the joints in drywall. Once it’s set, it dries very hard, so it’s durable and unlikely to be damaged by curious young viewers. The process starts with conceiving the composition and completing a drawing of the final image.

Like the library mural, most of Detjen’s works are commissioned pieces, but when he creates products for shows, he tends toward nature images. And there are two areas he won’t consider for commissions: portraits and abstracts. This isn’t because of a lack of skill; rather, it’s out of respect for his clients and their homes. He knows that with portraits, it’s not only about getting the image of the person right, but it’s also about capturing the individual’s personality – and that’s difficult to create. And abstracts? “People who do abstracts evolve the piece while they’re creating, and there wasn’t going to be any way I was going to do something on somebody’s wall without a plan.”

He went into the library-mural project with a solid plan and said of the process, “I started [working] right at the library. [I] blew up a pattern that big [to fit the space] and used a projector to make sure the design fit the space. I then made a paper pattern and cut elements out and traced the image on the wall.” Next, he applied the plaster with putty knives and a bag that’s similar to the ones cake decorators use.

From start to finish, the mural took seven days, with Detjen working behind a barrier so the library could remain open while he was working. He’s used to – and even enjoys – people watching him while he works because he regularly gives demonstrations at art shows and teaches classes in Green Bay.

Detjen has been a woodcarver since he was little, and he used his woodcarving as a creative outlet after long days at a manufacturing job. He came up with the idea of sculpted walls during a sleepless night.

He said, “Basically at about 2 one night, I began thinking about doing something on the walls like this, and called my sister [who’s an interior decorator] and asked her if she’d ever seen anything like it. And she said no, but that it sounded like a good idea.”

From there, “Everybody I showed it to liked it … and I made my hobby into my full-time business.”

For more information about Detjen and his sculpted murals, go to whatarelief.biz.