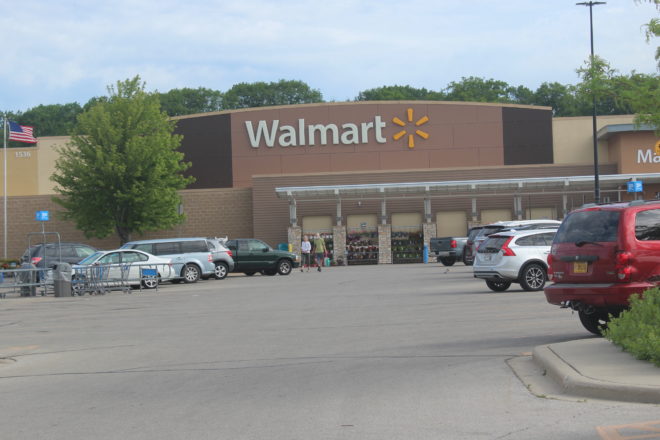 Walmart is suing the City of Sturgeon Bay for a refund of property taxes for the 2021 tax year that it claims are excessive. The company is also seeking to lower by $3.2 million the overall assessed value of three parcels that it owns along Egg Harbor Road. Photo by Kevin Boneske.

A $3.2 million difference exists between what Walmart claims its three parcels in the City of Sturgeon Bay are worth and how much they are being assessed for. Property-tax years 2021 and 2022 are now in dispute for the parcels along Egg Harbor Road.

Walmart claims the parcels’ combined value should be no more than $4.45 million, compared to their current assessed value of $7.65 million.

For the 2021 tax year, a lawsuit filed on behalf of the Walmart Real Estate Business Trust against the city is now pending in Door County Circuit Court.

Prior to that suit being filed by lawyers from the Milwaukee-based law firm of Gimbel, Reilly, Guerin & Brown, last year Walmart was granted a waiver of a hearing on its assessment objection before the city’s Board of Review, with the basis for the company’s waiver request being to take the matter directly to circuit court.

Walmart is seeking a refund on the property taxes it claims are excessive, plus interest, with the company suing to lower its overall assessment on the three parcels by more than 40%. Door County property records show the company paid $135,771.80 in property taxes for 2021.

“Upon information and belief, the 2021 assessments were not uniform with the assessment of other properties in the City and State and therefore, violates the Uniformity Clause of the Wisconsin Constitution,” the court complaint states.

On June 8, the city’s Board of Review granted another waiver of a hearing on Walmart’s assessment objection on the same three parcels.

The company’s latest waiver request stated it plans to take the matter directly to circuit court, where the case for the 2021 tax year is pending.

“We believe that our assessment is reasonable,” he said.

City Administrator Josh VanLieshout said the Sturgeon Bay Common Council will hold a closed session Tuesday to consider whether to approve a mediated settlement with Walmart or continue to contest the matter.

Town Counsel Law & Litigation, a law firm based in Kaukauna, is representing the city in the assessment dispute.

Of Walmart’s three parcels, county property records show the largest – with approximately 25 acres – has an assessed value of $7.032 million, with the land valued at $1.291 million and improvements listed at $5.741 million.

When the Peninsula Pulse sought comment on how the city and the company determined what the assessed values should be, neither the city’s assessor, Myles McKown of Associated Appraisal Consultants; nor Walmart or the company’s law firm, responded to phone calls or email messages.

State law recognizes three possible methods for assessing property: the market approach of comparing properties that have sold to value those that have not; the cost approach, related to the cost to develop a property; and the income approach, which involves a property’s income potential.

The uniformity-clause argument in Walmart’s complaint against the City of Sturgeon Bay has been used on behalf of other commercial retailers that have sought to lower their property assessments with what’s known as the “dark-store loophole,” in which they claim their properties are worth the same or close to the lower value of similar but empty buildings.

For example, the same Milwaukee-based law firm that’s handling the case for Walmart against the city used that argument while representing Woodman’s Food Market in its assessment dispute with the Village of Howard.

Throughout the state, companies that have challenged their assessments and won – either in court or with an out-of-court settlement – have been able to receive a refund, with the affected municipalities losing property-tax revenue.

The League of Wisconsin Municipalities (LWM), whose membership includes the City of Sturgeon Bay, has been involved in recent years with opposing the dark-store loophole. The LWM spearheaded an advisory referendum on the issue throughout Wisconsin in 2018 and then an unsuccessful effort to change state law.

Though Gov. Tony Evers has supported ending the loophole, a bill that would do that was unable to clear both houses of the state Legislature. Wisconsin Manufacturers and Commerce, which opposed the legislation, claimed that ending the loophole “would just make it easier for aggressive assessors to raise property taxes on businesses.”

With a legislative end to the loophole looking unlikely at this point, LWM Deputy Director Curt Witynski said the LWM is encouraging its members to defend their assessments after municipalities have won their cases in court, such as the Village of Plover prevailing in its assessment of a Lowe’s store.

An article Witynski co-authored for LWM’s magazine, The Municipality, listed a series of “best practices” for municipalities to follow to succeed in assessment litigation, such as adhering to practices and procedures found in the Wisconsin Property Assessment Manual when determining assessed values.

Witynski said the LWM has filed legal briefs at the state appellate and Supreme Court levels on behalf of municipalities involved in dark-store loophole cases, and the LWM is awaiting the outcome of a decision expected soon in a Wisconsin State Supreme Court case involving the City of Delavan defending its assessment of a Lowe’s store.