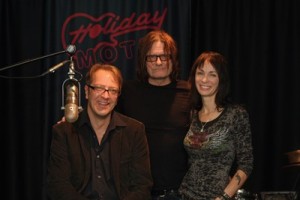 Just days away from the launch of Steel Bridge Radio at 3:33 pm on Sunday, Oct. 27, Operations Manager James Larsen still doesn’t know what the first song will be, and even if he did, he certainly would not share it with anyone beyond the Steel Bridge Brain Trust at the Holiday Music Motel, i.e., pat mAcdonald and melaniejane.

What Larsen, pat and mj do know is the first song on Steel Bridge Radio must be as monumental as the steel bridge the annual festival honors, and as monumental as MTV choosing The Buggles doing “Video Killed the Radio Star” in its historic launch 32 years ago.

“What our first song is will be very important,” Larsen said in his well-modulated 55-gallon barrel deep radio voice.

And this launch has the same sort of momentum as the new concept of music videos had on MTV, for Larsen, a commercial radio guy, is leading the charge for this new internet station devoted to original content created in Sturgeon Bay, Wis., Larsen’s hometown.

With the advent of Pandora and Spotify and the ability to stream radio stations around the world, traditional radio seems to be going the way of the traditional daily newspaper.

“Anybody in internet radio that has unique content and personality will dominate. So here we are,” Larson said. “Content is the biggest problem of internet radio. This is original content. The Holiday Music Motel is an original content super star. The content is flowing from here. Nine years now (of Steel Bridge Songfest and the weeklong songwriting that precedes it at the Holiday Music Motel). We’re at a situation where we have a large enough library we can go 24/7.”

Last January Larsen was living in California but had applied for a job a Sturgeon Bay-based radio station. He prepared for his return by listening to music on the Holiday Music Motel website and became a fan of the original music being created there. When he learned more, he was especially intrigued by the idea that this music was being created at themed songwriting events, usually in random collaborations determined by spinning a bottle.

“It’s just a magical process that creates some of the best music around,” he said.

Upon his return to Sturgeon Bay in February, he wanted to share the story of the Holiday Music Motel and the music being created there, so he began working on an idea to feature music from the motel on a radio program that ultimately was called the Six Pack at 6, which began airing last spring on Mondays on WRKU, a half-hour of music from the motel with backstory from Larsen and the artists themselves.

“It was so well received. People are hungry for this quality of music,” Larsen said.

Larsen wasn’t the first one to think of broadcasting the musical creations of the Holiday Music Motel. melaniejane points out that the motel has its own radio tower, and there had been talk of creating a small-wattage station, and they had been in secret negotiations with another radio person about a collaboration.

“James was different from the moment he walked in the door,” melaniejane said. “He immediately had this passion for the music and wanted to do something with it. James walked in at the perfect time. He’s so gung-ho about it. It was really pretty serendipitous.”

“Six Pack at 6 kind of showed us what we could do,” pat said.

“It whetted the appetite of everybody involved, including the songwriters,” Larsen said. “When we asked the artists to participate, it was instantaneous.”

“Which is so great because every song has a story,” melaniejane said.

And with recordings from three different songwriting themed events held annually at the motel (Steel Bridge Songfest in June, Love Songs in February and Dark Songs happening this week with performances on Nov. 1 & 2), they will have plenty of original material to choose from.

“We probably have 1,000 songs in our archive, not just what made the disc (for each themed event), but many which did not make it for one reason or another,” pat said. “We will probably play a larger playlist than most radio stations.”

“Absolutely,” Larsen adds. “We have a body of work that has a large enough playlist we can go 24/7. Of course there will be heavier rotation placed on premier songs. We want frequency to get into the listeners’ ears.”

Getting back to that first song that will open Steel Bridge Radio to the world, the start time does give one thing away – 333 was the late Billy Triplett’s shorthand for himself. The memory of Triplett, the motel soundman who died at the motel on Aug. 11 after his fifth heart attack, is certainly the reason for the start time.

“Billy will be there at the launch,” pat said. “The first song will definitely be something Billy was involved in.”