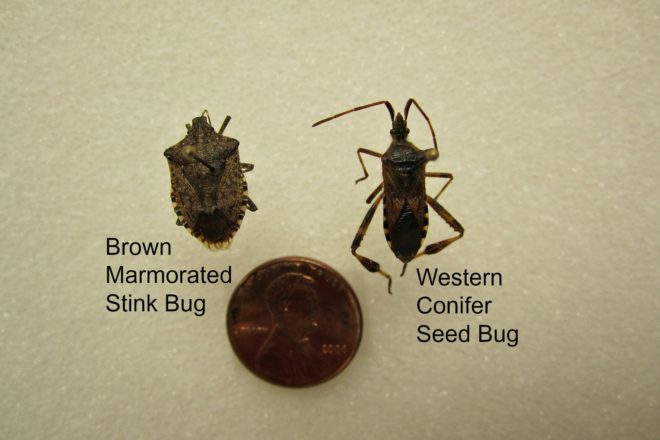 Calling all citizen scientists, want-to-be entomologists, or anyone who just likes a good treasure hunt. The brown marmorated stink bug, Halyomorpha halys, is an invasive insect spreading throughout Wisconsin, and I want to know if it is in Door County!

There is only so much sampling that I can do, so I need all hands on deck.

The brown marmorated stink bug (BMSB) is originally from Asia and managed to hitchhike to the United States in the early 2000s. Since its arrival, BMSB has been found in 43 states, including Wisconsin. Within Wisconsin, BMSB has been found in 12 counties, mostly centralized around the Madison/Milwaukee area and the Fox Valley. So far there aren’t any records of it being found in Door or Kewaunee County.

Like so many invasive species, BMSB is going to be a challenge to control because its natural predators, present in Asia, aren’t here to keep the numbers in check. Of invasive species, BMSB is of a particular concern because it is a major agricultural pest and it likes to spend the winter inside our houses, in sometimes phenomenal numbers. BMSB is a generalist, meaning it feeds on a wide range of plants where it uses its straw-like mouthpart to suck juices out of whatever it is eating. It is particularly known to be a problem in apple orchards and pumpkin patches, but it also feeds on tomatoes, corn, beans, peaches, grapes, peppers, and much, much more.

The first step in dealing with an invasive insect is to determine where it is so that proactive steps can be taken before it causes too much damage. This is where anyone reading this comes into play. We need to know if it is in Door County, and since it likes to migrate into houses for the winter, fall is the ideal time to search for it. On a sunny day, go outside and inspect the outside of your home, especially on a sun-warmed, light-colored wall. You will likely see a range of insects including Asian lady beetles (ladybugs), western conifer seed bugs, box elder bugs, and many more, so the challenge is to find BMSB in the midst of all the others.

BMSB is about the size of a dime, but there is some variability because females are larger than males. BMSB is your typical-looking stink bug, relatively rounded, with some defining characteristics. including two white stripes across its antennae, a light and dark alternating pattern around the abdomen, and light-colored stripes on its legs.

Many other insects look like BMSB and are often confused with it. The most common of which is the western conifer seed bug. Western conifer seed bugs are insects that feed on pine and fir tree seeds and are completely harmless to the homeowner, although they likewise overwinter inside homes. Like BMSB, they have light and dark markings on their abdomen, but their body is more ovular than circular. Also, western conifer seed bugs are in a family of insects known as the leaf-footed bugs. They get this name because the ends of their hind legs flair out, almost like it is wearing bell-bottomed jeans. The hind legs of BMSB are narrow throughout.

If you find anything that you even think could be a brown marmorated stink bug, please catch it and bring it into the UW-Extension office in the Door County Government Center. These insects can fly, so if you see one on the side of your home, use a small container or empty pill bottle and quickly put it on top of the insect and then tap it to get the insect to go inside. If it isn’t cooperating (as insects frequently don’t), while still holding the container against the wall, slip a piece of paper underneath the opening in the bottle and push the bug inside. Once inside the bottle and it is capped off, bring it into the Extension office. If you can’t make it here right away, place it in the freezer until you can bring it in.

If you have any questions about the brown marmorated stink bug, or would like more information, visit stopbmsb.org or call the Extension office at 920.746.2260. Thanks in advance for your help!