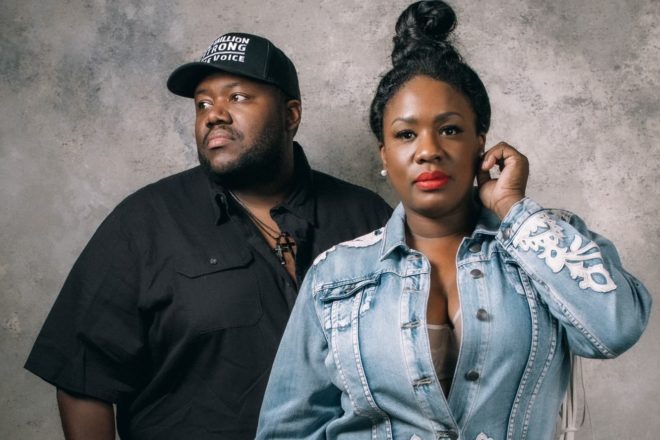 Husband-and-wife duo The War and Treaty will fill Door Community Auditorium (DCA) with a distinctive fusion of soul, country and rock July 12, 8 pm. Their Fish Creek concert will be one of their first shows back in America after an 11-date European tour.

When Michael Trotter and Tanya Blount met at a festival in 2010, they didn’t know they’d be performing for audiences all over the country only a few years later. The Michigan-based duo started small, performing together in 2014 simply as Trotter & Blount, and releasing their debut EP, Down to the River, in 2017.

But The War and Treaty was quick to gain traction, no doubt thanks to the eclectic sound the group creates in combining a range of genres to craft a new one.

“I’d put their music in that ‘broad as a barn’ category of Americana,” DCA executive director Cari Lewis said. “You’ll hear a bit of blues, gospel, soul, bluegrass and country.”

Along with the unique sound, the band’s high-energy performances helped it to grow in popularity. Trotter plays piano; he and Blount both sing; and a band provides backing horns, drums, strings and the occasional tambourine.

When Lewis heard the band would be touring the Midwest, she was excited to book it for DCA, having watched its career blossom since before the pandemic.

Only a few months after The War and Treaty’s first EP release, Rolling Stone named the group one the 20 Best Acts of AmericanaFest, and by 2018, it had released its first full album, Healing Tide.

But despite their professional success, the couple was facing serious challenges at home: Trotter was suffering from post-traumatic stress disorder after serving in Iraq. In 2017, he was planning to end his life, but Blount persuaded him to stay, if only for “five more minutes.”

Her plea worked, and in 2020, it became a refrain for the song “Five More Minutes,” featured on their second album, Hearts Town, and performed for audiences worldwide.

Though the song’s subject matter is dark, the music is far from sad. Its hopeful chorus is bolstered by bold trumpets and piano, making for a powerful celebration of resilience.

“When you have complex, nonlinear issues like PTSD and social injustice, music is a perfect medicine to help us communicate, heal and help others heal, too,” Lewis said.