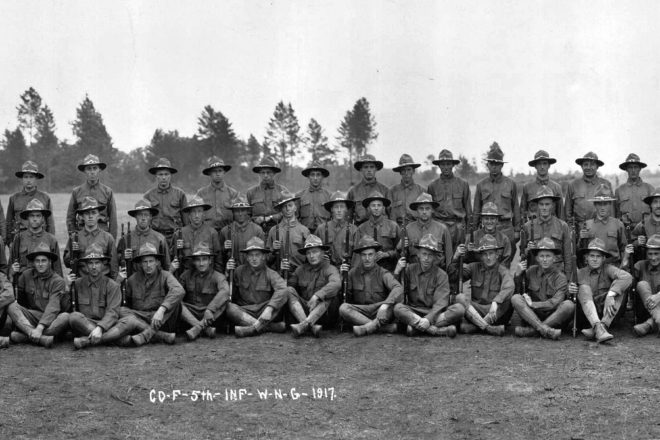 Company F, comprised of recruits from Door and Kewaunee counties, photographed at Camp Douglas in the fall of 1917. Photo courtesy of the Door County Historical Museum.

World War I came knocking on Door County doors as soon as the United States entered the almost three-year-old conflict on April 6, 1917. The United States was joining allies Britain, France and Russia in fighting Germany and its allies (Austria-Hungary, the Ottoman Empire and Bulgaria).

April 6 was a Friday. By the following Monday, key Door County residents had already met to organize a “loyalty celebration” in Sturgeon Bay for April 14.

Newspapers of the day — there were three of them operating in 1917 Sturgeon Bay — announced the patriotic gathering and parade “to create patriotism and enthuse everyone with the spirit of standing true to our country in the present trying situation.”

Or, as another one said, “The country needs all the young and able-bodied men it can muster. Those who have been clamoring for an opportunity to fight for their country now have a chance to show what they are made of. There is plenty of room for all who apply.”

Here is how the Door County News reported on the formation of what came to be known as Company F on April 11:  “It is planned to form a company of 150 young men of Door County as a branch of the National Guard and this movement will receive a proper launching on Loyalty Day. A number of young men of the county have already pledged their names for this company which will represent Door County as a unit. Thus the Door County boys, if called upon to serve under the flag, will not be scattered to all parts of the states but will leave this county as a unit.

“Membership will be open to the entire county, and any young man with proper moral standings may join the guards. The age at which they may serve through is from 18 to 35 years…

“In the civil war, Door County sent out a goodly number of our boys. A number of veterans are still in our midst who will attest to the loyalty of Door County men in volunteering during that big struggle. The boys of ’61 were there with proper spirit and it is expected that the boys of ’17 will show the same unswerving loyalty to their country.”

“What’s the matter with the young men of Sturgeon Bay and Door County? During the past few days there have only been a few added to the list of recruits for the National Guard, when it should have been growing by leaps and bounds.”

By July 27, the members of the newly formed Company F were ready to exhibit their drilling skills to the public, and on Aug. 17 they shipped out to Camp Douglas.

“Amid the tears and cheers and farewells of mothers, fathers, sisters and brothers, sweethearts and friends Company F left home this morning bound for Camp Douglas, the state mobilization camp…”

So read the front-page story in the Aug. 17, 1917, edition of the Door County Democrat, announcing the departure of the Door and Kewaunee county recruits for boot camp before being sent to the trenches in France as part of the 32nd Division’s efforts in World War I.

In January they sailed for France and were in combat by May 1918 and continuing through until armistice on Nov. 11, 1918.

The commander of Company F was Capt. Edward S. Reynolds, son of Edward Reynolds, who managed Door County’s Fruit Growers Canning Co. Capt. Reynolds was actually called home shortly after the end of the war in early 1919 when his father died and he was needed to run the business. Reynolds and two other members of Company F — Cpl. Carl Koutnik and Sgt. Clyde O. Helgeson — were awarded the Croix de Guerre (Cross of War) by the French government for bravery on the battlefield.

While the boys were over there, Americanism grew over here in this land of diverse immigrant populations. Immediately, German-Americans became suspect, as the Door County Democrat reported in its May 4, 1917, edition:

“Busybodies have been doing some spiteful and obnoxious work. A number of our citizens of German extraction have been reported to the District Attorney as disloyal. Their loyalty has never been questioned, and they are therefore greatly incensed at the charge. Redress will be sought in the courts, of the names of such parties can be secured. People engaged in such work of maligning their fellow citizens might create for themselves more trouble than they will be able to undo.”

The Door County Democrat felt it necessary to reprint an item from the Chicago Examiner:  “Every man who insults and abuses peaceable Germans and German-Americans and so stirs up hatred and resentment, and every man who throws a peaceable and unoffending German or German-American out of employment, does his own country a severe injury. Such a man is not showing patriotism. The president expressedly deprecated such policy in his speech to Congress. The desire of the president and the hope of all sensible and patriotic men is that everybody will treat the German residents among us and the German Americans who are our fellow citizens with a manly magnanimous courtesy and a full consideration of their difficult and painful situation.”

However, despite such high road thinking, some did find it necessary to do things such as Anglicize German last names, rename sauerkraut Liberty Cabbage, change German shepherds to Alsatians, and town names, such as Germantown, Indiana, to Pershing, Indiana, in honor of Maj. Gen. John J. Pershing, commander of U.S. forces. Performance of Beethoven’s music was banned in Pittsburgh and the New York Metropolitan Opera Company replaced its German repertoire with French and Italian works.

German-Americans were referred to as “hyphenated” Americans. After war was declared, U.S. President Woodrow Wilson said, “Any man who carries a hyphen about with him, carries a dagger that he is ready to plunge into the vitals of this Republic when he gets ready.”

Germans and German-Americans did have to watch their language, as Egg Harbor farmer John Zettel learned the summer of 1918 when he was charged by Door County District Attorney Willard Gaede, acting upon a complaint from H. C. Scofield, chair of the Door County Council of Defense, with using seditious language and condemning the government for participating in the war.

Turns out Zettel was angry that one of his farm workers had been called up for duty. The complaint was amended to “using language tending to provoke a breach of the peace” and he was fined $100 plus $22.47 in court costs. The judge also ordered Zettel to contribute $100 to the Red Cross, but Zettel said he would only pay the fine and court costs and the judge couldn’t force him to make the Red Cross contribution, which was true.

The Door County Advocate ended its Aug. 2, 1918, report of the court case with this editorial comment:  “This is not the first time that a case of this kind has arisen in this county and it seems that those with pro-German tendencies would realize that it does not pay to express them to others.”

People were asked to sign loyalty oaths, but that wasn’t enough for some. The American Defense Society, which had been advocating for war against Germany since 1915, believed that all German-Americans, “unless known by years of association to be absolutely loyal, should be treated as a potential spy.”

Wisconsin had one of the largest German immigrant populations in the country, and their cultural pride in the old country had deep roots. Two German language newspapers were in operation in Wisconsin during World War I — the weekly Manitowoc Post (1881 – 1924) and the daily Milwaukee Herold (1860 – 1931).

In Wisconsin and throughout the Midwest, German-Americans became victims of vigilantism, with reports of shootings, hangings and, very popular at the time, kidnapping the victim, tarring and feathering him, driving him to the state line and telling him he’d be hanged if he came back. That’s what happened to Minnesota farmer John Meints, who is mentioned here because of the gruesome photos that were taken after the attack and that today reside in the U.S. National Archives. But those things happened in Wisconsin, too.

On Aug. 19, 1918, amidst anti-German sentiment during World War I, German-American farmer John Meints was taken from his home in Luverne, Minnesota and driven to the border with South Dakota. There, masked men whipped him, threatened to shoot him, and tarred-and-feathered him, forcing him to cross the border and threatening to hang him if he returned. Meints named 32 of the men involved in a lawsuit, but they were acquitted, with the judge instructing the jury that the evidence strongly supported his disloyalty. Meints later won an appeal and settled out of court in 1922. Photo courtesy of the National Archives.

The April 1, 1918, edition of the Ashland Press in Ashland, Wis., tells the story of Professor E. A. Schimler, teacher of languages at Northland College, being taken from his rooming house at midnight by a dozen masked men, brought to “a lonely spot” a half-mile from the city, stripped and then “given a substantial coat of tar and feathers.”

Schimler, an American citizen who was brought to this country by his parents when he was 14 and a graduate of Dartmouth College, was described by college authorities as “a very efficient teacher” and “there is absolutely no evidence that he was disloyal in words or actions.” He just happened to have a German name and taught the German language.

Hyper-patriotism and anti-German sentiments continued through the war, but not everyone lost sight of the principles of this nation. Here is a portion of an editorial simply titled “Patriotism” in the April 11, 1917, Door County News:

“We now stand committed to a program of insistence upon a far reaching principle of freedom and justice. Certainly patriotism demands of us calm, cool, unbiased thought and action. What pertains here in America in government of the people by themselves, must reach to the farthest corners of the earth and save all humanity from the frequently recurring scourges of war. America has not hatred toward any people but it does hate injustice and inhumanity and treachery. We shall emerge from our present distress still flying the banner of freedom and opportunity for all.”