Try as I have, I can’t remember when I was first introduced to a live Black-capped Chickadee. Most likely it was as a young boy on my grandparents’ farm situated high above the picturesque Opichka Valley and the Kewaunee River, near Slovan, several miles northwest of Kewaunee.

Call it apple orchard ornithology if you wish, but that’s what always comes to mind when I reflect upon the birds seen and learned about in the fenced-in small grove of organically grown apple trees protected from the cattle, growing between the south side of the granary and the road. 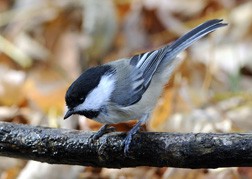 I distinctly recall the Eastern Kingbird, Eastern Bluebird, Gray Catbird, Baltimore Oriole and American Goldfinches. Surely Chickadees must have been there too, the farm being so close to dense stands of Arborvitaes and other evergreen trees bordering the river.

When learning the songs and call notes of birds became important in my interest in ornithology, it was the Black-capped Chickadee’s high, plaintive, far-reaching “WHEE-dee-dee” song that threw a “curve” at me. Surely it was an Eastern Phoebe that was doing the singing, or so I thought.

Throughout my years of interpreting nature, including birds and their songs and call notes, hardly a day in late spring and early summer passed without at least one person offering their thanks for correcting them. For years they had thought, as had I, that they were hearing Eastern Phoebes in the distance when indeed they were Black-capped Chickadees. The Eastern Phoebe’s song has a rather airy wheezy nature compared to the very pure, clean, whistled song of the Chickadee.

The call note, “chick-a-dee-dee,” after which the bird was named, is quite unmistakable. In the case that you may spend some time this winter in the South and see and hear some Chickadees, don’t be surprised if their call notes and songs are considerably higher and faster than you are used to hearing “up north.” Very likely you are seeing and listening to a Carolina Chickadee which is about a half-inch shorter than the Black-capped, looks like its northern cousin, but produces faster and higher-pitched calls and songs.

Of the several hundreds of Black-capped Chickadees I’ve handled through at least 25 years while banding them as a federally licensed bander, not one left me with the impression of being tame. Quite to the contrary! They were wild creatures in every respect.

I would have never guessed that a bird so small could pick so hard with its beak. Believe me, while they were being held and banded, they would peck at anything within in reach, frequently one of your fingers or the top of the hand. They commanded authority. What spunk and determination they displayed as you held them carefully but firmly while fastening the numbered aluminum band to one of their legs. Then, upon releasing the birds, it was customary to receive quite a tongue-lashing from these little beady-eyed bundles of boundless energy. Wouldn’t it be fun to know what they really were “saying?”

Now that it’s dark out when we arise I beat the birds to the feeders on most mornings. Occasionally I’ll be filling one of the feeders and, quite unsuspectingly, there lands a Chickadee within inches of my hand. Perhaps they hadn’t quite awakened yet either. 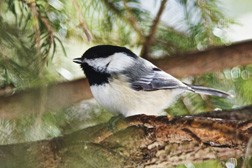 Instantly I “freeze” in position and invariably the black-capped friend carries on as though nothing is out of order. Surely they are conditioned to my being there too.

Just for the fun of it I have on occasion purposefully let the feeders go empty, watching them carefully all the time. As soon as they were empty I would go out to the platform feeders, seeds in hand, and patiently wait to be accepted as a “feeder.” It didn’t take long at all before a Chickadee, Red-breasted Nuthatch or especially a tiny fearless Pine Siskin took the hand-held seeds without hesitation.

Obviously you must stand perfectly still before they’ll accept you. I absolutely couldn’t believe my senses the first time a Chickadee landed on my outstretched hand in winter—its feet were like ice! Then it dawned on me—how could a small bird exposed to below-freezing air for several hours at a time be expected to have warm feet?

The Chickadee migration has most likely ended for the year. Yes, some of these birds do migrate. Banding studies have proven that the peaks of their migrations occur during March and early April as the birds move northward and again primarily in October and into November as they move southward. The species is at least partly migratory, the thought being that some of those at your feeders now may very likely be year-round residents. Others may have come down from the North, will stay for the winter, and return northward next spring for nesting.

It may be that many of our friends are birdwatchers which accounts for the fact that a lot of the Christmas cards being received these days are decorated with Chickadees. Good choice!

Chickadee, rest assured that we trust and respect you as one of our very best friends!