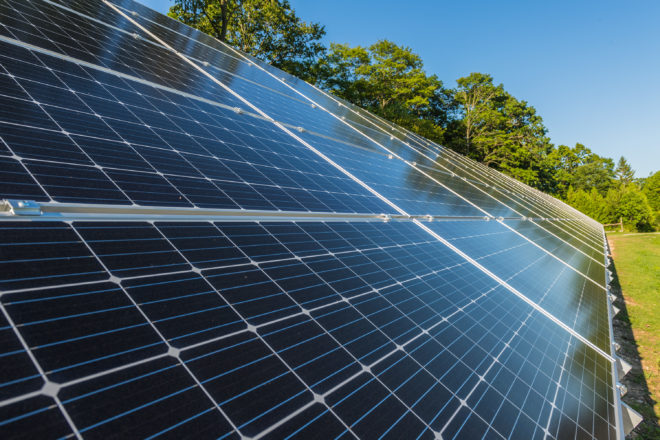 In keeping with its goal of sustainability, Waseda Farms installed 190-feet of solar panels at its farm on Logerquist Road in Jacksonport. Jeff Lutsey, chief engineer and farm administrator, said it was a natural extension of their work with the added benefit of some cost savings in the long term.

“If you’re committed to the long term then you know the money investment part makes sense,” said Lutsey. “We think in about a seven- or eight-year span we’ll be able to pay this back. We’re putting that investment in the rest of the land, let’s put that investment in here.”

The system will cover an estimated 50 percent of Waseda’s energy use, the majority of which goes into the commercial freezers and coolers on the property that store meat before it goes to market. The system will also decrease coal consumption at the farm by 30 tons per year and CO2 emitted by 75 tons per year.

Lutsey, whose family owns and operates Waseda Farms, returned to work at the farm in 2015 after a career in mechanical engineering. His work experience was helpful in getting the solar project off the ground.

“We had been talking about it for years, kind of flirting with the idea,” said Lutsey. “With me being an engineer coming back, we needed someone to have those background discussions and work through the technical details.”

The Waseda team met with the Stevens Point-based North Wind Renewable Energy during the MOSES Organic Farming Conference in La Crosse. The two groups formed a plan for the project and North Wind finished installing the panels last week.

“Our reason for existing is to do the best we can with the energy given to us,” said Lutsey. “Our mission and vision are long term and the most long-term thing is having energy for many decades that supplies as much of the energy we use every day.”