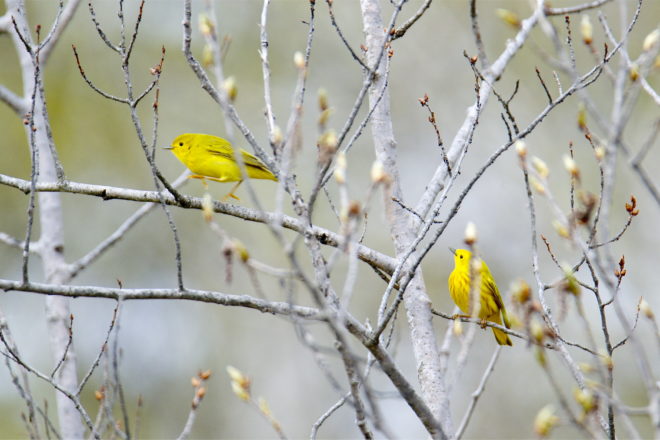 My mother always taught me it’s not polite to point, and I shouldn’t interrupt when someone else is talking. I have since learned, however, that manners don’t always count in the world of birding enthusiasts. If you see a bird, you have to let others know quickly, or it will be gone.

The event kicked off at Washington Island’s Potato Dock during the peak of the area’s warbler migration. The first thing I saw as I headed toward the dock was a large group of people gathered around a table. Cindy Samples, a retired USFWS park ranger, was holding a Lincoln sparrow gently in her hand. Samples is a certified bird bander from Winona, Minn. Some of her USFWS colleagues, Frank Gercz and Sarah Warner, just checked one of the two mist nets they had set up in the underbrush specially designed to safely capture birds. 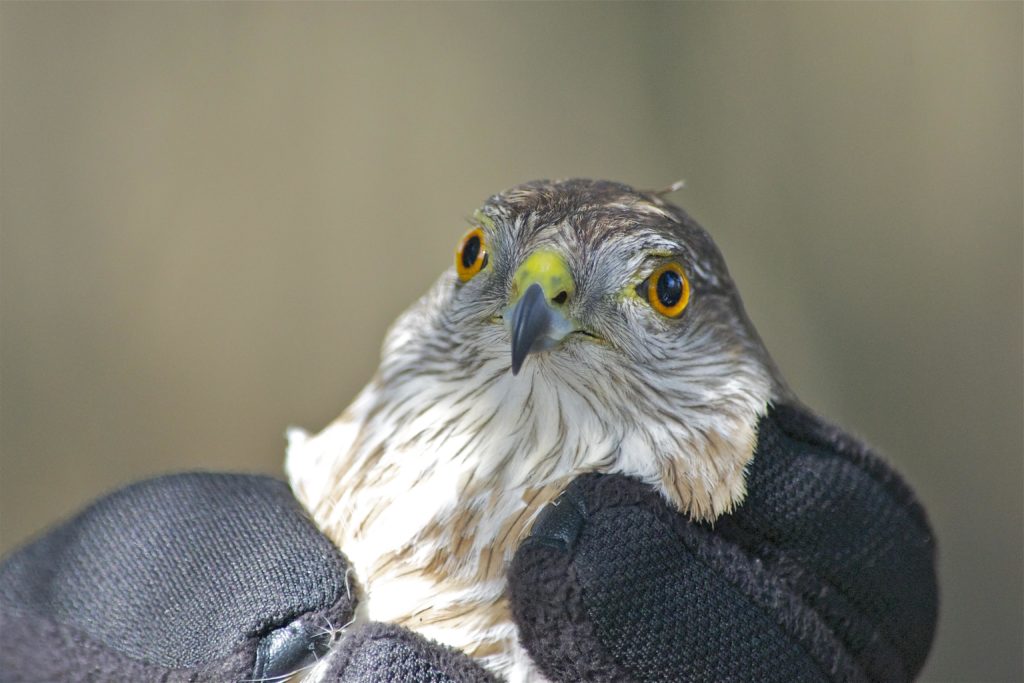 A small metal band was attached to the sparrow’s leg. Each band has a unique number assigned to it. Information collected by the bander is then entered into the USGS Bird Banding Laboratory’s database “to monitor the status and trends of resident and migratory bird populations.”

Festival participants were able to go out in the field with expert birders. I spent an afternoon on Washington Island with Wendy Cooke, Jesse Koyen and Mike Wanger. Koyen, a native Islander, led us to Big and Little Marsh State Natural Area and Boo’s Bluff Natural Area – a Door County Land Trust Property. Koyen and Wanger helped us identify many birds such as a black-throated green warbler, the American redstart and a Nashville warbler.  Wanger, who lives in Milwaukee, taught me how he comes up with ways to recollect a bird and its song.

“I think a Kentucky warbler’s call sounds like horses running; that’s how I remember it,” he explained.

Wanger was frequently entering data into his smartphone. He is a reviewer for e-Bird and is helping to coordinate Wisconsin’s five-year Breeding Bird Atlas II survey. Birders like to keep lists; they also enjoy sharing them with others.

Koyen revealed the melodious chorus of bobolinks in a wetland area near his boyhood home. His interest in ornithology began at the age of four while watching birds out of the kitchen window with his grandmother. 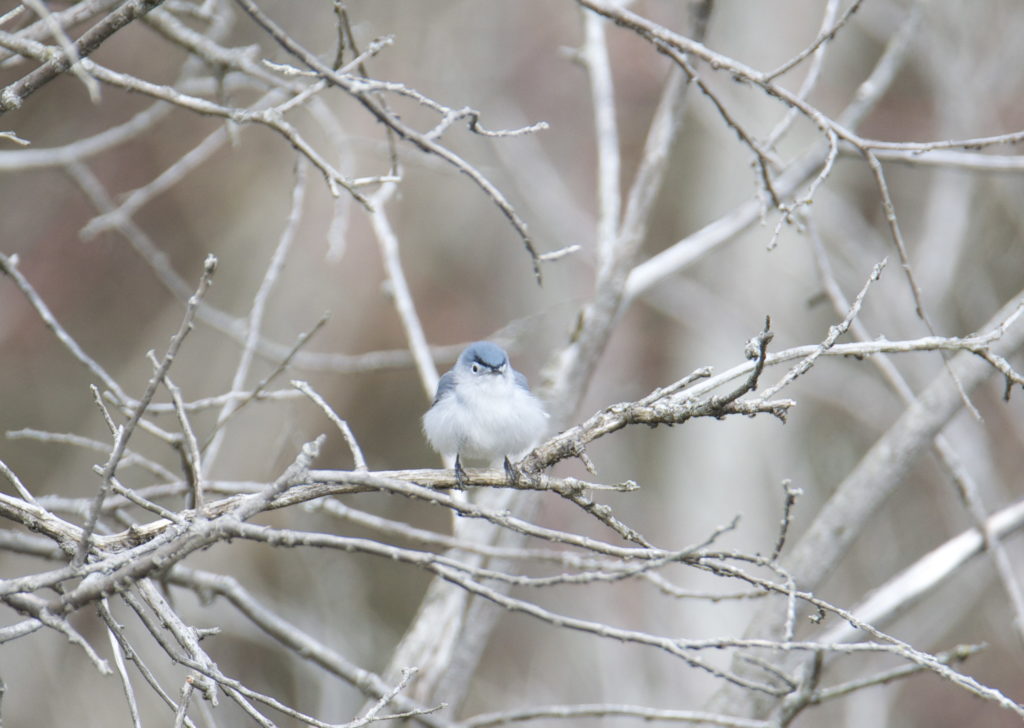 The second day of the festival got off to a wet and rainy start aboard the Yankee Clipper as we headed to Plum Island – part of the Green Bay National Wildlife Refuge (GBNWR).

Despite dreary conditions during the 10-minute crossing, birders were on high alert.

Everyone assembled in the boathouse where Ranger Dustan Hoffman gave the damp crowd an orientation to 325-acre Plum Island and the GBNWR. The refuge features several other area islands, which collectively provide “fueling stations” and nesting destinations to many species of migratory birds, and habitats for other wildlife, as well.

We instinctively learned on this day in May there was an overflowing abundance of “fuel” for our feathered friends. Dense clouds of midges (lake flies) were the source of energy. I understand now why the pinnacle of bird migration coincides with large hatches of insects. The bugs, combined with heavy fog, made visual identification of winged creatures more difficult, but the finely tuned hearing of our guides produced a total of 64 species identified on Plum in just a few hours.

The weather improved by Saturday afternoon. I spotted several birds I had never seen before back on the southern part of Washington Island. My list starred a pair of yellow warblers, a red-eyed vireo, and one of my new favorites: a blue-gray gnatcatcher. This cute little guy has eyebrows that make him look mad like the avian cartoon characters in Angry Birds.

Later that evening, USFWS bird researcher Sarah Warner shared information on the Kirtland’s warbler conservation effort she currently leads. Warner is based out of Madison, where she has taken over the effort of bringing this endangered bird species back from the brink of extinction. Kirtland’s warblers annually migrate from specialized jack and red pine nesting habitats in Michigan and Wisconsin to their winter homes in the Bahamas.

After a short intermission, Amy and Rob Hults of the Open Door Bird Sanctuary in Jacksonport presented a program on raptors that featured four live birds – a merlin, a barred owl, a saw whet owl, and a turkey vulture.

On Sunday we were up early for a chilly excursion aboard the Karfi over to Rock Island State Park. This 912-acre birding hotspot is a favorite of ornithology lovers far and wide. The highlight of the festival occurred for me when a sharp-shinned hawk was captured in a mist net set up in the park’s campground. 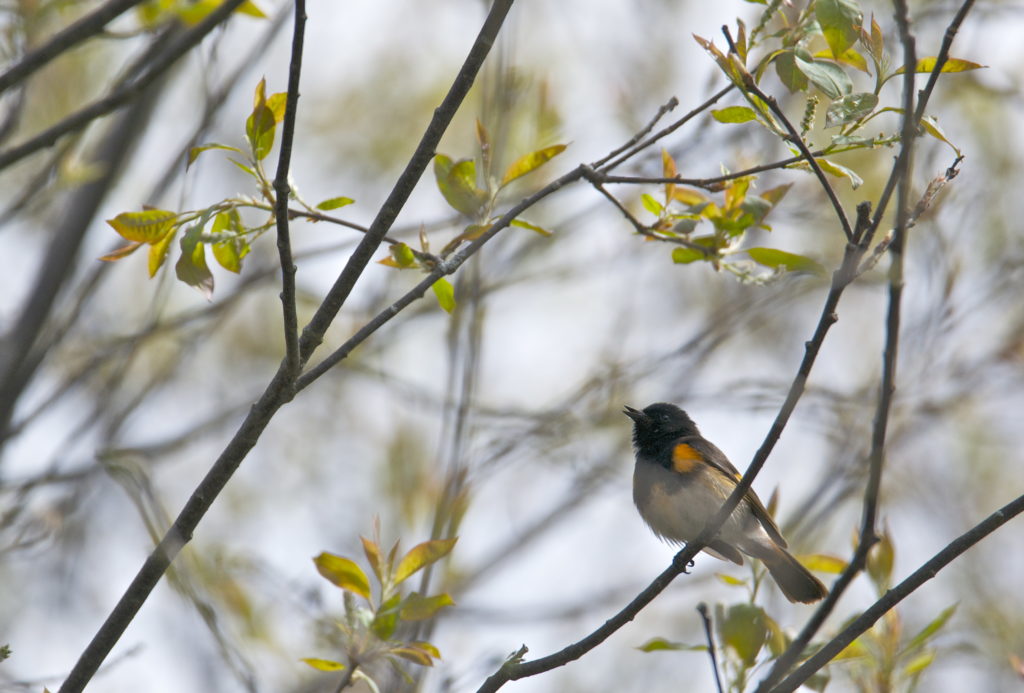 Warner carefully removed the hawk from the net and discovered it had a band on its leg. She read the band’s unique number to Samples, who recorded it. Melody Walsh, a retired Wisconsin DNR employee and one of the festival planners, used her smartphone to check the Bird Banding Laboratory’s database and learned that this bird was banded as a hatchling on Sept. 15, 2017, in Port Stanley, Ontario, Canada, near Toronto. As the crow flies, it was a long way from its previous home. Walsh entered information into the database regarding its stop on Rock Island in case the raptor is ever recaptured.

More than 70 species of birds were seen or heard during the morning. People made their way back to the dock and boarded the ferry. It was just about time to leave Rock Island. Steve Waldron, a local naturalist, was taking attendance to make sure no one was left behind.

He was interrupted when Walsh suddenly yelled, “Peregrine falcon!”

Everyone turned to look in the direction she was pointing. The falcon, known for its aerial prowess and speed, swooped next to the starboard side of the Karfi before landing in a dead tree near the island’s rocky spit.

Wow, a peregrine falcon! What an inspiring way to end three days of world-class birding on the islands of northern Door County!

I left the experience thankful for the endless variety of sights and sounds the natural world provides for all to enjoy. And I learned that sometimes there’s a good reason to point at something or to interrupt another person if the sighting of a really cool bird is at stake.