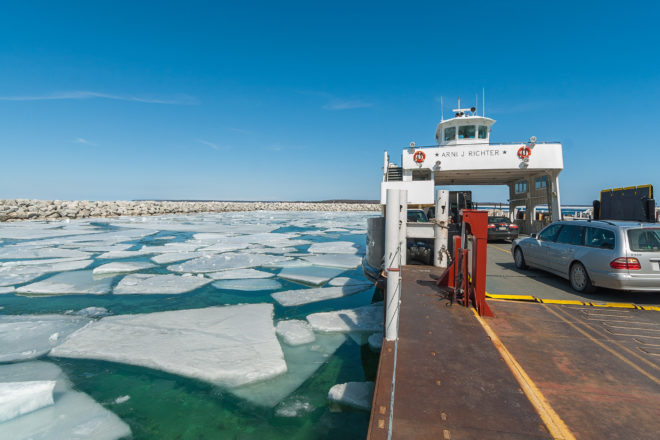 Although Hoyt Purinton, president and general manager of the Washington Island Ferry Service, is careful to call 2016 a record-breaking year for the ferry, “I would lie if I said it wasn’t around the best we’ve had yet.”

In the Sept. 9 edition of the Pulse, we reported that the ferry was on track to break the record for the 76-year-old ferry service. Since then, warm fall weather, foliage and general island attractions have kept those numbers on track.

“The people that were especially clued into fall colors really came in force and we didn’t have the peak colors until the last weekend of October,” said Purinton. “As far as island lodging I think there were times there wasn’t any availability or very little… This built on other stronger years of people staying on the island.”

Not sure how to count people, cars, tickets or bikes when calling it record-breaking, Purinton consistently used the phrase, “a very strong year.”

That strong year has the propellers turning for new boats and expanded service out of the Northport dock.

“We’re looking at ways that we can add capacity,” said Purinton.

“We’re planning for new boats that don’t come cheap and that’s a long process to get there.”

“We had a really nice September and October and most of November, now we’re getting the flip side of that,” said Purinton. “Some of the weather conditions we’ve had in the past week have been kind of the perfect storm.”

Still, the ferry line is running through the sea smoke and icy water on its way to one of the most successful years in its long history.