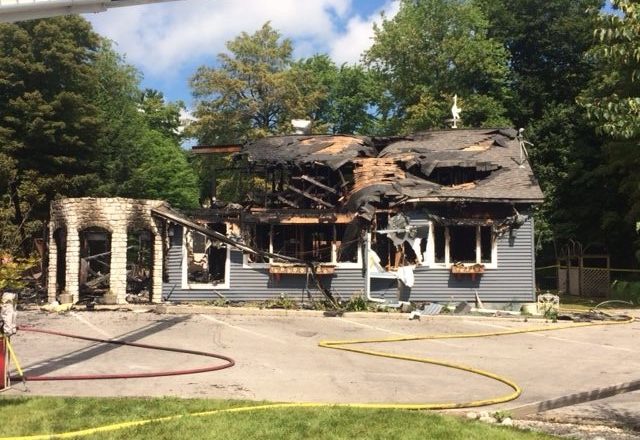 The Danish Mill on Washington Island was declared a total loss after an Aug. 16 fire. Photo by Kerri Ann Anderko.

The Danish Mill restaurant on Washington Island was destroyed in a fire that broke out early in the morning Wednesday, Aug. 16.

“I’m feeling nothing but shock right now,” owner Tom Nikolai said. “It’s too early to say too much, other than that the community support has been tremendous.”

Nobody was in the building at the time of the fire.

The building was constructed in the 1940s, according to Nikolia, and an addition was built in 2010, when the Tom and Patty Nikolai opened the business.

Washington Island Fire Chief Paul Swanson said the building is a total loss. The fire was called in by a neighbor at 3:45 am, and the Washington Island Fire Department responded with 25 men. Swanson called for mutual aid from the Sister Bay/ Liberty Grove Fire Department, which sent eight men who were transported by the U.S. Coast Guard boat. The crossing takes about 10 minutes with that boat, Swanson said.

State fire investigators from the Fox Valley are on the scene to determine where and how the fire started. Swanson said it appears to have been an accident, but determining where it started will be tricky.