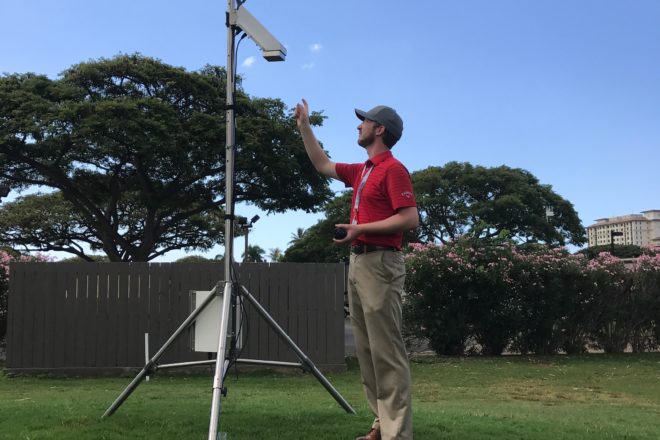 Joseph Halvorson with his weather equipment, a CS110 electric field meter and anemometer on top of tripod. Submitted.

Golf tournaments – from local charity outings to professional spectacles – are at the mercy of Mother Nature. Joe Halvorson understands that well, and he makes sure everyone involved at a tournament is aware of potential weather-related hazards.

Halvorson, who grew up on Washington Island and attended Kewaunee High School, is an on-site event meteorologist for DTN, a weather information provider based in Minneapolis. As for the golfing part, Halvorson’s job has taken him around the world for the past five years as he provides weather reports at professional golf tournaments.

Halvorson, who worked at the Thornberry Creek LPGA Classic just outside of Green Bay earlier this month, explained how DTN is contracted to provide on-site event meteorologists for dozens of professional golf tournaments, including competitions on the PGA and LPGA tours as well as the Web.com Tour, which is the developmental tour for the PGA Tour. Halvorson has also worked as a meteorologist for DTN at large events like the Indiana State Fair and an Indiana University graduation ceremony.

“I think the coolest thing about this job that’s different than maybe the other meteorology jobs out there is I never expected to be in these parts of the world as part of my job,” Halvorson, 27, said.

At the beginning of each tournament, Halvorson sets up equipment to monitor lightning potential and predict inclement weather.

“The equipment I set up is called the CS110, and it measures basically the electrical charge in the atmosphere when a cloud is passing over,” he said. “What I can do with that information then is basically I can try to determine the potential for a lightning strike hopefully before it’s building overhead.”

“They are using that forecast to set up the golf course,” he said. “For example, they may not set the hole in a low spot if heavy rain is forecast and may cause ponding on the greens. Additionally, on windy days the hole locations may be less difficult to account for the already challenging conditions.”

Working right in the “rules trailer” alongside the officials, Halvorson can quickly relay weather information to the officials and verify that a dark cloud may indeed signal an approaching storm.

“Growing up on Washington Island, you had these wide open spaces and you could see storms coming in off the lake. I think that’s probably where my fascination with it started,” he said. “My family always kind of jokes that I was going to be the ‘Weather Man.’”

Halvorson said he began seriously considering meteorology during the last few years of high school and looked at universities that offered a meteorology program. He ended up at Iowa State University.

“I kind of wanted to be near Tornado Alley. Severe weather was definitely a focus of mine,” Halvorson said. “I always loved storms.”

Halvorson said the job can be stressful at times, as there is always some unpredictability with weather patterns. Having to delay a tournament and add an extra day to it can cause headaches for many involved in the competition, especially players with packed tournament schedules, Halvorson said.

Despite the challenges and demanding travel schedule, Halvorson said the job is very rewarding. Not much of a golf fan growing up, Halvorson said he has grown to appreciate the game and enjoys interacting with players, caddies and rules officials.

“(Some players and caddies) know who you are after a while, and they’re going to be asking you ‘Do I need to bring the umbrella today? The rain coat?’ Once you get that interaction with them, it’s hard not to cheer for certain players,” Halvorson said.

Halvorson said he’s worked at about 50 events during the past five years, and hopes to continue this work in the future.