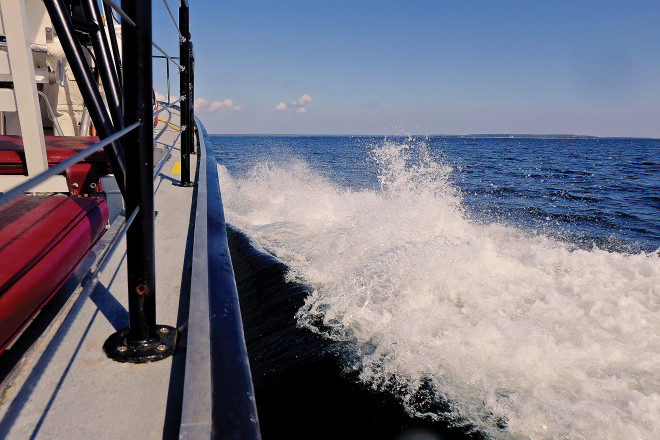 What is a potential visitor’s perception of Washington Island?

This is a question I often ask myself, especially when trying to come up with marketing ads for radio or print media for the Washington Island Ferry Line, my employer of the past 40 years.

There is the ferry ride, of course, pleasant enough most days, but not always so. Strong winds bring large waves, and if we provide daily service all year around, then ferrying people and vehicles onboard a rolling, tossing ferry can’t be avoided. But that’s the exception to the rule, especially in summer. Many passengers, we’ve learned, enjoy movement when on the water, and they don’t mind waves.

Okay. So then we ferry across the passage known as Death’s Door, Porte des Mortes. Historically, this was an important strait connecting Green Bay with Lake Michigan. Wrecked canoes and bodies of Native Americans strewn along the shore gave rise to this name, according to the oral history passed to visiting voyageurs in the 1600s. The name was bolstered through shipwrecks of later years, the schooners and steam vessels of 100 and more years ago.

The mystique of this passage adds spice and excitement to a ferry ride, certainly, but should we de-emphasize the Death’s Door bit, stressing instead our modern-day safety record, the frequency of schedule, our experienced captains, and steel ferries with many electronic navigational devices? We welcome ferry riders to join us, and unless it’s foggy or snowing hard, several other islands and lighthouses will be seen along the way, a bonus!

We invite visitors to not only ride our ferries – which are fun, safe for families and fair maidens as well as hairy-chested sailor-fishermen – but we want them to experience Washington and Rock Islands, too.

When you arrive on Washington Island, what will you see and experience? Visitors may think:  fish boil; potatoes; baseball; smooth stones at School House Beach; Icelanders with hard-to-pronounce names; or the Bitters Club at Nelsen’s Hall. This list may be a good start, but it’s not all that Washington Island is or offers.

The best way to approach Washington Island may be to think of the island community, a rather close 700-plus residents with attributes you’d probably enjoy comparing with your own community.

As one who moved to Washington Island with my wife and son in 1974, I was interested in learning more about my new home, unraveling family names, their relationships and histories over the years. I’m still learning, as it turns out, and it’s this search for understanding I find most compelling and endearing in the island community.

Let’s go back to the early days when the Town of Washington was the first township organized in Door County, in June of 1850. That organizational meeting was held on Rock Island.

But, isn’t Rock Island a Wisconsin State Park? Why, yes, so it is today. But stepping back to 1850, Rock had more residents than Washington Island. Good fishing and shipping lanes through the Rock Island passage, resulting in the first federal lighthouse on northern Lake Michigan – made Rock Island a budding community. But it had no harbors, and pioneer life was rough. After a few decades, its residents moved away to greener pastures. But for those few decades, Rock Island was the center of the township.

A further example of Rock Island’s early preeminence:  Door County’s first official meeting of Supervisors was held there, in December 1857*. Two officials traveled from Sturgeon Bay because Town Chairman Nolan, the Rock Islander, refused to leave his island home. An overland hike to Fish Creek for the two visitors, followed by a chilly, 30-mile sail to Rock Island – all for a meeting that lasted for probably less than an hour or two. But, a quorum was achieved, necessary to create an official taxing entity, the purpose of their meeting. Their trip home took two additional days because their sailboat was blown off course, north and west to the Upper Michigan shore.

By the time the Civil War ended nearly all Rock Islanders had packed their duffels, sewing kits, pots and pans. Some 40 years followed with little-to-no occupation, save the Pottawatomi light keeper. In 1910, a period of private estate ownership by a man named C. H. Thordarson began. Then, in 1964 Wisconsin purchased his land, and Rock Island became a state park.

In the late 1800s, meanwhile, on adjacent Washington Island, the objective for most of today’s visitors, a vibrant commercial fishing, logging and farming community grew. There also appeared a number of folks who braved long journeys to summer there in the supposed absence of pollen-inducing fevers. They enjoyed excellent bass fishing and made friends with the locals, most of whom were kind and polite people who brought with them manners and a good work ethic from across the seas. German, Irish, Danish, Norwegian immigrants – and declared most laudable through present-day marketing efforts were the Icelanders.

Situated at the crossroads of lake shipping, with its good harbors near passages that led to and from Lake Michigan, Washington Island’s population topped 1,000 citizens by 1900.

It was this melting pot of settlers and pioneer families, most of whom relied on fishing and farming for their livelihood, that gave rise to the strength of the island community today.

Regarding Iceland:  Four young men arrived from Eyrarbakki, Iceland, via Milwaukee, in 1870 to cut wood. Reports written to family members and friends back home described prosperity, and considering the scale of hardship in Iceland, tipped further by a significant volcanic eruption, others soon followed.

By 1900, many Icelanders were living on Washington Island. Their importance in the development of a functioning island community was further magnified when Arni Richter tipped his ferry captain’s hat to his Icelandic forebears. His new ferry was christened Eyrarbakki in 1970, the 100th-year anniversary of Icelandic immigration, marking a seminal moment for both Icelanders and for Washington Island.

Visitors will do well to learn more about early settler backgrounds and trades at the Jacobsen Museum at Little Lake, at the Island Farm Museum, at the Stavkirke (across from Trinity Lutheran Church), and at Jackson Harbor’s Commercial Fishing Museum. Each stop offers small gems of local history. They can be easily reached on bicycle. Or engage an island tour. Or, tour in your own car, guided by an island map from the Northport Visitor Center.

This is a small island – six miles across. The natives are friendly. You’ll find restaurants, taverns, stores, churches, gift shops, lodging – all the conveniences necessary to have a good time.

Make it your personal goal to figure out what makes this island community tick. You may see cows in a field next to a drive-in; the island’s K-12 school representing this state’s smallest school district, nestled among Main Road buildings that also include a community center, an indoor public pool and a performing arts center. Little is required of visitors, other than to obey the speed limit (generally 35 mph, ideal for bicycles), and to pay close attention to the ferry departure schedule.

You can make a day of it, or better yet, experience an island overnight to firmly secure your day’s experiences. Pack your knapsack, head for the ferry, and bring along a bit of inquisitiveness with an urge for exploration.