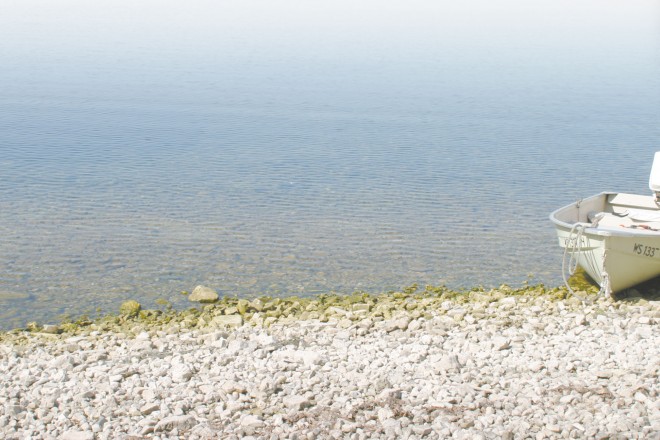 What I remember most about the trips is the sense of awe I felt. The open sea, the waves, and the weight of the wind against the sails enchanted me as we were pulled toward some unseen shore.

With it, of course, came stress. I can vividly recall my mother’s face turning white during a handful of docking attempts, my first bout with sea-sickness in 6-foot rollers, and the tension wrought by dark clouds gathering ominously to the north.

Now that I’m older, I appreciate the world those trips opened up for me. In high school and college I raced and taught sailing and, since then, have maintained an active interest in sailing the Lake Michigan shore. I’ve found that day trips on my own are enjoyable and aren’t nearly so daring as I once imagined.

One such day excursion is a trip to Horseshoe Island, located just below Eagle Bluff in Peninsula State Park. On a light breeze day, it takes about thirty minutes to sail from the heart of Ephraim and about one hour to sail from the Fish Creek dock. The best and most popular destination at the island is a little cove on the south side. The harbor, perfectly carved out of the land mass, gives the island its namesake and is one of the most protected spots to be found anywhere on Door County’s shores.

The island was originally bought by Norwegian immigrant Ole Larson in the 1850s and was later purchased by the Folda family in 1888. Today, it is part of Peninsula State Park and, except for a trail and the remains of an old building, looks much like it probably did in the early 1800s. Dropping anchor for the day is a great way to spend an afternoon; it’s peaceful and offers a spectacular vista of Eagle Bluff and its chiseled vertical caves.

West of Eagle Bluff lies another day trip destination. Nicolet Bay is Peninsula State Park’s prized beach area and can be accessed by water or land. It takes roughly the same amount of time to sail to Nicolet as it does to Horseshoe, but offers a very different experience.

The beach at Nicolet is sand, which makes it much easier to pull a canoe, kayak, or small sailing dinghy up on shore. There, you have full access to the State Park, including its historic lighthouse and scenic tower. On the beach itself, you can rent an assortment of small watercraft or visit its fully supplied camp store and campgrounds.

During high summer, Nicolet is bustling with other sailors and park-goers. Because its harbor is bigger than Horseshoe’s, it offers more to explore, while providing the same pastoral charm.

Whether you’re an experienced sailor or an amateur, both of these destinations are a great way to enhance a day on the water. For more information about the Peninsula State Park and its shores, call (920) 868-3258.