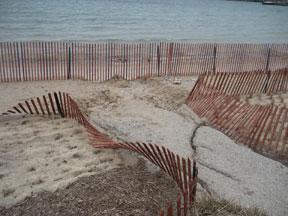 Runoff into the bay has carved a trench in the sand.

A design error has left a large portion of storm water still running down the bluff and into the bay without running through one of the new biofilters.

The project, which included expanding the sand beach, planting of long grasses, and installation of drainage pipes and biofilters to clean storm water before it hits the bay, was completed this September and October.

But an elevation oversight has much of the water from storm events running down a road and parking lot past the last of the three biofilters, where it has carved through the sand to get the beach.

“Half of the water is not going into the bio-filters, so we’re getting the dirty water going into the bay, which is [the problem] we were trying to solve,” Public Works Supervisor Jeff Meyer said. “It’s defeating the whole purpose of the project.“ 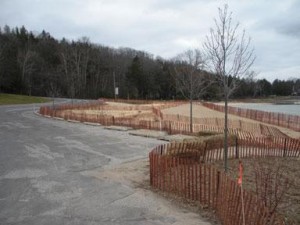 An elevation oversight has left storm water running down this road and parking lot past the new biofilters and into the beach. Engineers have proposed installing a curb along the pavement to route water to the biofilters.

“The project works as designed, but in one little area on the northeast corner the water is not directed to any of the filtration basins,” he said.

Miller Engineers has proposed fixing the problem by adding a curb along the pavement to funnel the water back to the biofilters. The company worked with UW-Oshkosh and the Door County Soil and Water Conservation Department to come up with storm water management designs for all Door County beaches. Egg Harbor was one of the first to choose to implement the new design.

“This doesn’t diminish the quality of the project,” Van Lieshout said. “The curb is probably the best solution and probably should have been done anyway to protect the landscaping from cars driving onto it.”

He said the curb work would likely be done next spring and would be wrapped into other parking lot improvements. Van Lieshout did not have cost estimates for the fix yet.

Board Terminates Mooring Agreement in Response to Peninsula Shores

The Egg Harbor Village Board terminated its agreement with Peninsula Shores Condominium Association that allowed nine boat moorings to the south of the public marina at a special meeting Nov. 30.

The decision was a direct response to Peninsula Shores request for a contested case hearing with the Department of Natural Resources (DNR) that was filed Nov. 12. Peninsula Shores claims that the DNR should not have permitted the marina as designed because two of the floating piers extend into Peninsula Shores water rights, impeding navigation, creating a safety hazard for users coming in and out of the marina, and obstructing the view from Peninsula Shores.

Egg Harbor President Nancy Fisher said that by terminating the mooring permits, the village has eliminated the alleged navigation and safety impacts, though Fisher said the village does not believe the design would adversely impact either.

There are nine mooring permits under the jurisdiction of Peninsula Shores. John Moravec owns one of them and urged the village not to rescind the permit.

“Like all mooring holders we’re strong supporters of the marina,” he said, reminding the board that mooring holders were repeatedly told that the marina would have no impact on the moorings. He said he understood why the village felt provoked into the action, but he thought that it was unnecessary and of no direct benefit to the village. He and fellow mooring holder Rich Dirks urged the village to pursue other remedies.

“The pier is not a danger to the moored boats,” Moravec insisted.

“Please take into consideration those of us who have been mooring holders for many years,” said Dirks, who has owned a mooring since 1981. Dirks and Moravec are not Peninsula Shores owners.

Fisher expressed her sympathy to the mooring owners but said the village “must meet every challenge to the municipal marina project.” The village moved to avoid any further delays to the project, which they are pressing to have completed in time for the 2010 boating season.

“This is very unfortunate,” said trustee Mike Fitzgerald, “but you need to take a look at where this petition originated. We’re in a box.”

Steve Schaefer, President of the condominium association, had no comment except to say that “it’s unfortunate that the current mooring owners are caught in the middle of this dispute.”

Administrator Josh Van Lieshout said the village would consider offering slips to displaced mooring owners. Dirks asked the board to consider reversing the decision if it is determined that there are no navigation or safety issues.

The DNR will decide whether to accept the request for a contested case hearing by Dec. 12.