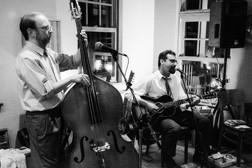 The Hot Shots play regularly in Door County and across Wisconsin and have developed a passionate and devoted fan following over the years. In recent years, their acclaim has spread beyond Wisconsin. As winners of the 2009 Grafton Blues Challenge, the Hot Shots traveled to Memphis in 2010 to compete in the International Blues Challenge.

Wickman House will feature sushi, hors d’oeuvres and a champagne toast at midnight in addition to their list of house cocktails, beer and wine. For more information call 920.854.3305 or visit wickmanhouse.com.