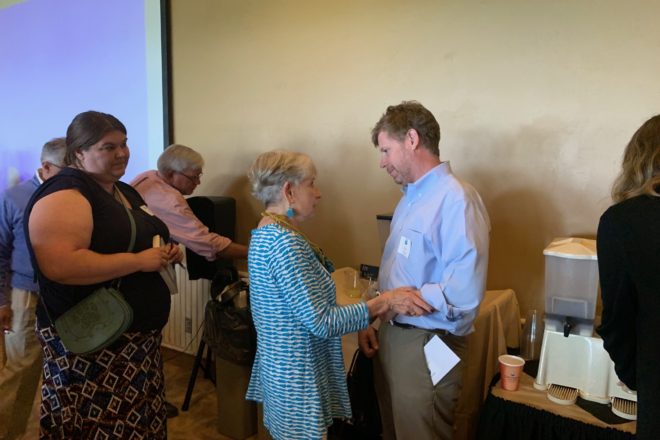 Dan Egan greets fans after discussing his book, The Death and Life of the Great Lakes, at the Door County Water Summit June 5. Photo by Myles Dannhausen Jr.

As the waters of Lake Michigan continued to climb along its shore, attendees packed conference rooms at the Landmark Resort in Egg Harbor for the 2019 Water Summit to hear more than a dozen experts discuss the health of the Great Lakes.

Among them was Dan Egan, a two-time finalist for the Pulitzer Prize and a longtime chronicler of Great Lakes health, who pointed to the near-record high lake level as a sign of the new normal for the Great Lakes basin.

“Who says it has to stop there?” he said. “It’s scary. That lakes have always been shackled by this six-foot swing three feet below and three feet above the historical average. Nothing says they have to be constrained by that.”

Records on lake levels go back to 1918, and in that time, the documented swings have come on a consistent timetable. But Egan said experts believe those swings will now be more frequent and more dramatic.

“Climate change is driving a lot of these highs and lows,” Egan said. “We hit the low because we’re losing ice cover, which meant we had more evaporation. Then we had the Polar Vortex winter, and massive ice cover and levels shot back up in a year or two. Now our precipitation is up 21 percent this spring.”

He said it’s now on citizens to adapt, rather than try to control the lake.

“The only thing we can do is prepare to be flexible,” he said.

Egan’s discussion was just one in two days of sessions and excursions led by 14 soil and water scientists, fishers, farmers and sustainable-development experts to explore how human activity and natural processes impact the waters of the Great Lakes. Jill Heinerth, a cave diver and underwater explorer, delivered the keynote address at the Door Community Auditorium Tuesday.

Two hundred people attended the conference, which was the brainchild of Anne Egan and the culmination of a yearlong celebration of water.

“Maybe I’m not the only one who has taken water for granted, and the concept for Celebrate Water came out of that,” she said. “Water is just too precious and too vital for life to take it for granted.”

For more on the summit and the Celebrate Water initiative, visit CelebrateWaterDoorCounty.org.