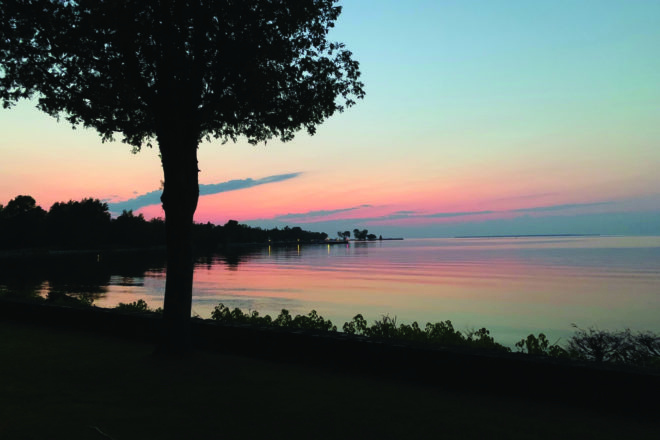 The restaurant at the Alpine Resort has been changed from the Hof to Burton’s on the Bay, but the one-of-a-kind sunset view will never change.

The wistful setting of the Hof, the former restaurant at the Alpine Resort, offered diners a unique ambiance. To enter the waterfront location was to step back in time, somewhere between the 1930s and 1950s. It wasn’t a stretch to envision men and women lunching lakeside in casual elegance – wide-brimmed hats, flowing dresses, lots of linen on the men, that kind of thing.

That vibe, if not entirely retained, was not altogether lost during the extensive renovations to the classic restaurant that will open for its soft opening May 27 as Burton’s on the Bay.

“It’s a combination of old and new,” said Jennifer Welsh, Alpine’s director of marketing, about the renovation of the resort’s restaurant. “Paying homage to the old Alpine is a big part of that.”

Dining customers will notice it’s been rearranged to maximize space, but is still a room with the former wow-factor view from those large picture windows facing the water. The bar is now located in the back and leads to the refurbished deck and the outdoor dining option.

“The plan is we’ll have live music on weekends to start, Saturday and Sunday, just to have nice background music in the corner,” Welsh said, with eventually a piano in the dining room. “We want to bring back that music that it was kind of known for at the Alpine while people were dining.”

The Alpine property consists of 165 acres of open green space, bluffs and nearly half a mile of Green Bay shorefront that the restaurant will use to full advantage beyond the view. The original pier has been restored and will host six-to-eight slips for a daily docking rate. A 60-slip marina is also in the plans.

“That’s the ultimate plan: to utilize the waterfront so people can come up on their boats,” she said.

It’s been a year since Alpine Resort Acquisition Company purchased the Alpine at 7715 Horseshoe Bay Road in Egg Harbor after 100 years of ownership by the Bertschinger Family. The new owner has remained publicly anonymous, but Welsh said the owner has “fond childhood memories visiting the Alpine” and has renamed the restaurant in honor of the new owner’s father.

A synopsis of that family history will likely be included on the restaurant’s menu, Welsh said, but the rest of the domain is Tony Gorham’s, the new managing director of kitchen operations and senior chef. Gorham previously worked at Gordon Lodge. Nightly specials are planned for the menu, as are Friday fish fries, gourmet soups, salads and sandwiches, and a variety of options from wood-fired pizza to fresh seafood.

Following the May 2021 acquisition of the resort, the new owner reopened the golf course to the public. Meanwhile, the clubhouse rooms and the property’s 29 cottages have undergone extensive renovations, with the first cottage guests arriving May 27. The main, 60-room lodge renovations will begin later this fall.

“The plan there is to renovate every single room and make a couple of suites,” Welsh said.

Reservations for dining at Burton’s on the Bay are needed only for parties of eight or more. The menus can be found on the Alpine’s Facebook page and at alpineresort.com once the restaurant opens for business.