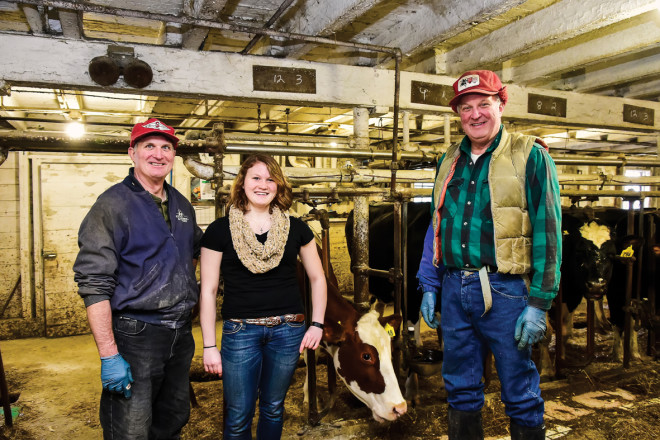 Paul, Madalyn, and John Gray at the family farm in Baileys Harbor. Photo by Len Villano.

Growing up on a farm is definitely not what it seems. It certainly has its perks, but when it comes down to the nitty-gritty it’s a lot of hard work and dedication. My name is Madalyn Gray, more commonly known as Maddy. It amazes me how much I have gained from growing up in this environment. At first it seems as though I spent my childhood feeding calves, raising kittens, collecting eggs, cleaning barns and, of course, dreading the days of picking stones and baling hay. Now that I look back I realize I learned a life lesson from each of these chores. I learned perseverance while throwing bales on the elevator, stamina while gathering stones in the scorching sun, and how to be nurturing while caring for the animals. One of the major concepts I have taken away from this portion of my life is the emphasis on local products. After all, there isn’t anything better than homemade goods. 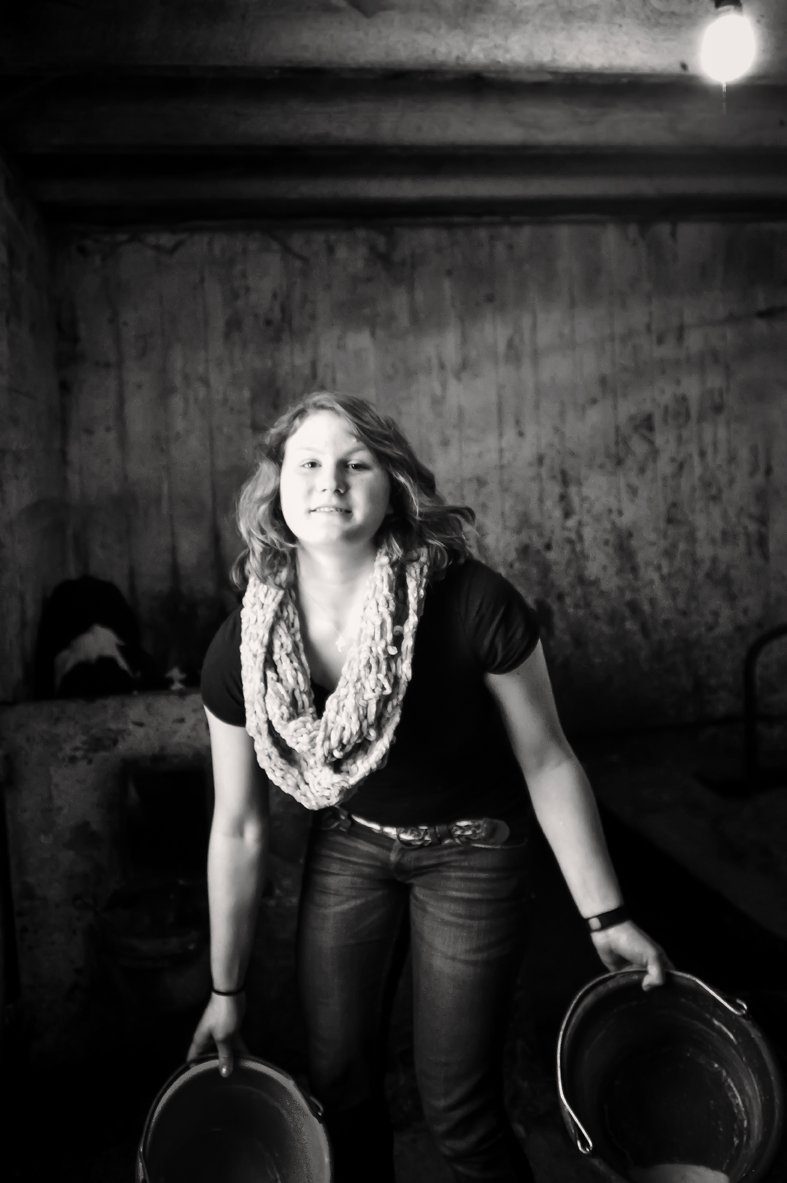 Madalyn Gray said she has learned a great deal from her life on the farm. Photo by Len Villano.

The majority of food people consume travels about 1,500 miles before it arrives on dinner plates. Long-distance travel is a reason why buying locally is highly recommended; not only does the food grown and produced locally taste more delectable, it is far more nutritious. Another plus is it helps support the community.

Here in Door County we are so lucky to have a number of locally minded vendors. Door County Creamery in Sister Bay is the latest to produce locally, and has certainly made its way to dinner talk. Besides using their goats’ milk to create products, some of the milk used to produce the cheese is provided by the Gray-Aire Dairy Farm in Baileys Harbor.

Jesse Johnson, owner of the creamery, came to the Grays’ farm in hopes of purchasing some of the farm fresh cows’ milk to produce cows’ milk cheese instead of their usual goat cheese. The purchased milk is picked up fresh, put in a refrigerated truck, and then transported to the creamery. At this point, most creameries store the milk until it’s needed but not at the Door County Creamery. The fresh milk goes straight into the vat where, depending on the type of cheese being made, it’s subtly pasteurized and left to set. 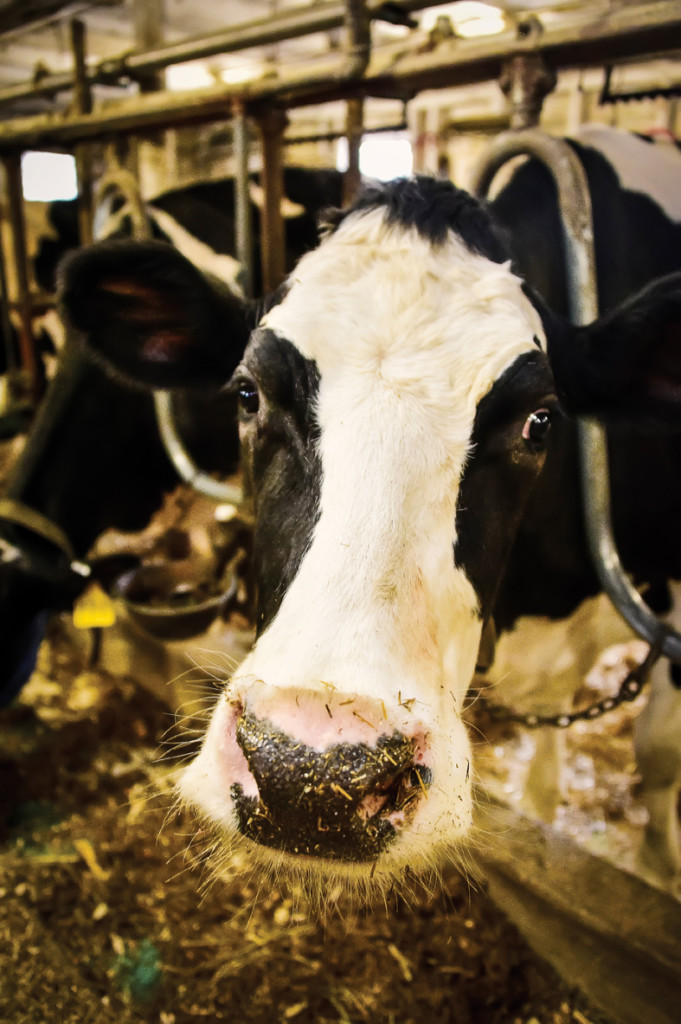 Happy cows graze on grass in the summer months at Gray-Aire Dairy in Baileys Harbor. Photo by Len Villano.

Johnson explained, “Fresh and local is the only way to go quality-wise. The difference between local and non-local is astounding. Not to mention it supports other members of the community in their trade.”

Cheese curds can be made right away, but Johnson has some other plans for the milk. One of them is to produce a fresh mozzarella with a combination of goat and cows’ milk. These cheeses would then age during the winter while the creamery is closed.

John and Paul Gray, owners of Gray-Aire Dairy Farm as well as my uncle and father, share similar views on local products. When asked about his thoughts of local milk being used locally, Paul replied, “It’s good to see a local business being successful with great products.” Paul’s motto – “Good milk makes good products” – basically says it all.

Besides going to the creamery, the milk gets picked up every other day by Dairy Farmers of America (DFA). The DFA supplies several companies including Borden. “The milk we produce can be used for string cheese, bottling or ice cream, it all depends on where the truck is going,” Paul explains.

The Gray-Aire Dairy Farm has been producing milk for generations. In 1960 my grandfather Harold Gray relocated his cattle from Highland Road in Fish Creek to Baileys Harbor in order to upgrade to a larger farm. The famous Door County cow traffic jam has been up and running in Baileys Harbor ever since. John and Paul bought the farm from their recently deceased father and are now the absolute owners. In total there are 43 milking cows and about 45 heifers. 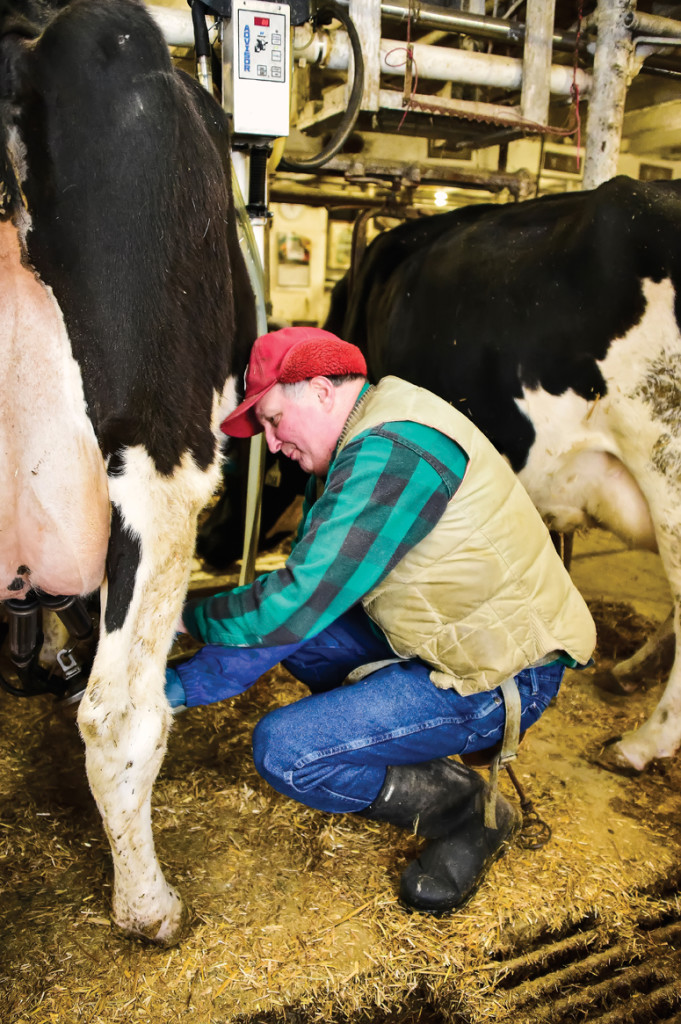 The Grays still milk their 40 – 45 cows by hand. Photo by Len Villano.

Besides volunteering the next generation of Grays for haying and picking stones, all of the work is done by the two brothers. The only exception was when Gibraltar High School sent Justin Enigl to apprentice for three hours every morning during the winter of 2011 to the spring of 2012. It was a good learning experience for the student and Paul isn’t afraid to admit he misses the help. “He was a hard-working kid who wasn’t afraid to get his hands dirty,” said Paul.

A vacation is next to impossible because cows have to be milked daily. “We milk them twice a day and try to keep a 12-hour cycle in-between milking times,” said Paul.

Each cow produces about 70 pounds of milk a day, which is about 21,000 pounds of milk a year, which is equivalent to the weight of two elephants. In order to produce milk, cows need to eat about two to two-and-a-half percent of their body weight in dry matter. When asked what his cows eat Paul explained, “In the winter the cows get dry hay bales, haylage, corn silage and feed. Their feed consists of oats and corn with a variety of vitamins, minerals, soybean meal, cottonseed meal and distillers. In the summer they get to graze on 50 acres of grass pasture.”