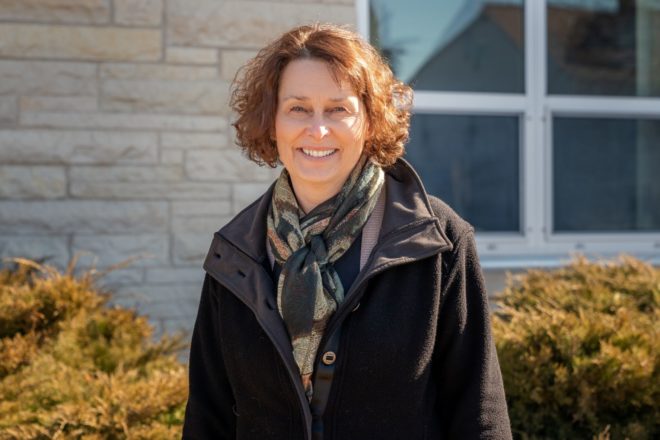 How people intend to spend their retirement years is a personal thing, and by the time you read this, Sue Powers will be on her way to doing her version of it.

Powers was the Door County Public Health officer/manager during an unprecedented time in public health. Her category of professionals was accustomed to going about their days behind the scenes, building and improving the overall health of the community through programs that address a diverse spectrum of issues from mental health and suicide-prevention measures, to programs that nurture children and families, to the beach-testing program.

They worked almost as invisibly as an immune system as they battled the health invaders that can undo a community. Then COVID-19 burst onto the scene, pushing those quiet and serious professionals onto the front lines. They were the ones tasked with keeping the virus from spreading, hospitals from overloading and the most vulnerable from dying. When people divided and opinions became entrenched, those working in public health continued to dispense science, safety protocols and vaccinations that angered at least half the population at any given time. And they heard it, daily.

“It didn’t matter what decision they made,” said Joe Krebsbach, director of Door County Health and Human Services (HHS). “There was really no right answer for Public Health.”

Powers’ last day was June 24, but she did not retire because of COVID-19. In January, she achieved the Medicare-eligible “magical age of 65,” yet she had pictured herself working into her late 60s. Still, she said it’s very fair to say that COVID-19 hastened her retirement.

“I find myself in a place where I’m tapped out, and I need to take a step back,” she said. “It just feels right to do this now. My next step is to take a deep breath and take care of myself and see what happens. The first thing I have to do is regain some rest.”

Powers has described her department during the pandemic as building the plane while flying it.

“In early 2020 when this started, we had no idea what we were up against, and we just stepped up,” she said. “We all stepped up – eat, live, breathe, sleep COVID and try to keep up.”

The situation took an emotional toll and created a workforce challenge.

Within seven months after the pandemic began, the department was on its way to losing half the full-time employees in its 10-person department. Among those resignations were two administrative assistants – “because they couldn’t do the work with the public anymore,” Powers said – and then two of the three full-time public-health nurses.

“It’s been really hard on the full-time people,” she said. “Not just the busyness. It was really challenging dealing with the public and other agencies and professionals. Universally, people are upset. People are calmer now, but we get people who are really mad about stuff having to do with COVID still.”

Though the end of her career may have overshadowed all that came before, Powers is a public-health nurse first. She joined the department in 2006 and was promoted in 2018 to lead it when the previous public-health officer, Rhonda Kolberg, retired.

Although many people may not have known what public-health professionals did before COVID-19, Powers said she’s always been passionate about her department’s “truly critical role in health. A lot of attention is placed on medical care, but public health takes a community-wide approach to social and health factors.”

Powers cited statistics that show that the health of individuals and communities, to a degree as high as 80%, are based on community and environmental factors. Less impact comes from the more highly considered matters of individual access to medical care and health care services.

Powers said the department tries to be visible and promote all the good work it does. This is especially true for a non–revenue-producing department that may save a child from lead poisoning, and the learning disabilities and crime associated with it, but that’s hard to quantify to those who hold the purse strings.

“Prevention is difficult to measure,” she said. “The Robert Wood Johnson Foundation says there’s over $5 in savings for every dollar spent on public health. But I can’t show the county board on the budget where we save that money. Just because it can’t be measured doesn’t mean it’s not vitally important, and that’s a hard sell to the county board.”

Powers said she leaves her position most proud of supporting her staff members, even when so much has been out of their control.

“I’m very sad about the staffing crisis here at Public Health,” she said. “I wish it wasn’t so.”

All jurisdictions need a public-health officer, and Door County has an interim agreement with Kewaunee County to provide that service until Powers’ position is filled.

Kresbach said he’s grateful for Powers’ work and “the commitment she had.” Moving forward, he said HHS is “reloading the deck. We’re rebuilding from the ground up.”

There are eight vacancies to be filled in HHS, most of those in behavioral health and public health.

HHS is the county’s largest department, with 91 employees when fully staffed and $12.1 million in budgeted expenses, according to the approved 2022 budget. The only other county department that even comes close to HHS’s size is the Sheriff’s Office, which has 60 full-time and six part-time employees, according to Steve Wipperfurth, Door County finance director, and $8.9 million in expenses budgeted for 2022.