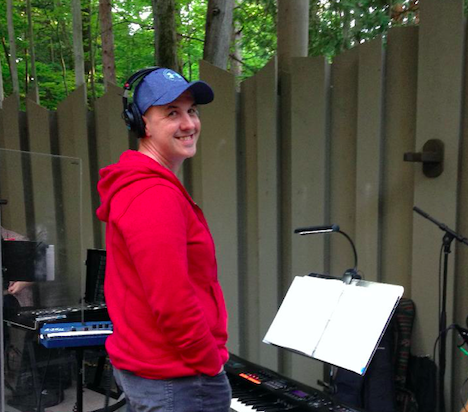 Lenihan at Northern Sky Theater in 2018.

Tim Lenihan was nine when he asked his mom to show him where middle C was on his great-aunt’s old piano in the basement of his family’s south-side Chicago home. Already studying the French horn, he was interested in figuring out how the notes he was learning on that instrument could be applied to the piano.

Busy raising eight children, his mom didn’t have time to show him anything beyond that one note, but he found her old beginner piano books and worked his way through all of them. “That piano was terribly out of tune, and a lot of the keys didn’t work,” he said years later, “but once I knew where middle C was, I figured the rest of it out.”

The French horn continued to be Lenihan’s major instrument through high school. He saw his first Broadway touring show in Chicago during his sophomore year and fell in love with the score of Les Misérables. His goal from then on was to someday play French horn in the orchestra of that show.

The following summer, he attended the prestigious Interlochen Music Camp in Michigan. “There was music surrounding you everywhere,” Lenihan recalls. “It was magical.” Still continuing his study of the French horn, he also enrolled in a group piano class, where he learned a Chopin prelude and played it in a Friday concert. It was his first public piano performance.

He graduated from DePaul University in Chicago with a bachelor’s degree in French horn performance, but his focus by that time was entirely on piano. He planned to pursue a master’s in piano performance, but the university required that he first complete an undergraduate degree in that field.

Many people would have taken their French horn and found a job with an orchestra, but Lenihan was determined. He spent an additional six years at DePaul to get that degree in piano performance, working full-time in the university library and taking two or three free classes a semester. Not only did he earn his second degree, but he also graduated debt-free!

His first paying job, 2001 to 2003, was as the studio accompanist for the Young Artists Program of the Lyric Opera of Chicago. He also worked with the Chicago Children’s Choir, one of whose members was the daughter of the man who contracted shows for American Girl Place Theater. When he suddenly needed a keyboardist for Wicked in 2006, his daughter mentioned Lenihan, who began a five-year job as assistant music director there.

“Two things about that job,” he said. “I saw it as a step closer to Les Misérables, and I met Colin Welford, who was the conductor of Wicked. Welford, a Brit, has worked internationally for more than 20 years as conductor and music director of such shows as The Lion King, Wicked, Billy Elliot and Hamilton, which he’s currently in his third year of conducting in Chicago.

For seven summers, beginning in 2008, Welford spent his “off season” with American Folklore Theatre (AFT) in Door County, a place he came to love (and eventually own a nice corner of). And when AFT needed a music director in 2012, he remembered the talented keyboardist he’d worked with during the four-year run of Wicked in Chicago. So, Lenihan came to American Folklore Theatre and stayed for seven seasons, including 2015, when it was renamed Northern Sky Theater.

Wicked was Lenihan’s foot in the musical-theater door. Since then, he’s spent the past 19 winters as a keyboardist and conductor in nine major theaters in Chicago and Milwaukee with 24 touring shows, including Miss Saigon, Billy Elliot, Aida, Hairspray, Annie, Sunset Boulevard, Cats, Newsies, West Side Story and My Fair Lady.

And finally, in the fall of 2018, Lenihan got to play second keyboard during a month-long run of his dream show, Les Misérables, at the Cadillac Palace. “It’s hard to describe the thrill of that experience,” he said. “One night when the orchestra was playing ‘One Day More,’ I had to fight to control my emotions as I was thinking, ‘It’s finally happened.’”

Later that winter, he spent a month touring with Mannheim Steamroller. “It was a neat experience,” he recalled. “I’d wanted to tour for years and had subbed on a Disney tour every now and then. For a while, I spent maybe a week a month on tour with Newsies. I really enjoyed visiting different places. With Mannheim Steamroller, I had my own dressing room and a tux with my name embroidered in the label, but we traveled by bus – to a different city every day!”

In the summer of 2018 – which would turn out to be his last at Northern Sky – he got a call from Brian Eads, conductor of Les Misérables, asking whether he’d be interested in playing keyboard on its tour for two and a half weeks this April.

His answer, of course, was easy. Even a short-term tour with his dream show fulfilled a decades-old goal. And the best was yet to come. In Louisville, the conductor told Lenihan that the keyboardist position might be opening up full time, and he could audition by submitting videos of himself playing and conducting. (Thanks again go to Colin Welford, who gave him conducting lessons in his Chicago apartment before Lenihan came to Door County last year.)

He got the job, of course, and signed a one-year contract. But that’s not the end of the story. Since beginning the 2019 season, he’s discovered that the Les Misérables tour is open-ended – scheduled to run at least through May of next year.

Lenihan was interviewed at the end of a month-long run in Los Angeles, heading for Colorado Springs and 30 more cities in 20 states, where he’ll play eight shows a week for the next 11 months. This time, Lenihan, the 15 other musicians and the cast of 36 are not primarily traveling by bus as they crisscross the country.

“It’s a dream come true,” he said. “I feel so fortunate to be doing what I love. All of us become friends on the road, and unless we need to rehearse with a new cast member, the days are free for sightseeing in every new city. My favorite thing is seeing old friends in places we visit – Karen and Dave Studebaker in South Bend, Howard and Patty Williamson in St. Louis, current Northern Sky cast member Bill Thiesen in Iowa City, and former AFT/Northern Sky cast/crew members Jon Hegge and Jamie Schmidt in Minneapolis, Lisa Mion in Baltimore and Libby Carr in Houston.”

It’s likely that Lenihan inherited his musical talent from his paternal grandfather, who died young, before Tim was born. “My dad has always been so proud of me,” he said, “because I remind him of his father, who was a fine pianist but did not have a professional career.”

The Lenihan family, including his dad, his mom (who showed him where middle C was!) and many members of his extended family will see him conduct Les Misérables when it plays in Chicago in July. It will definitely be a high point in a teenage dream – even though he won’t be playing French horn in the orchestra pit!