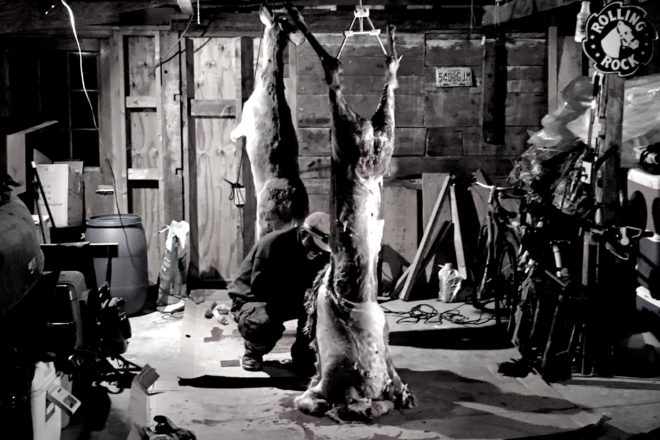 Steam rolled around the cold hands that tightly gripped the skin that was being gently torn and peeled away from the flesh of the deer. The wispy steam swiftly faded into the cold, stale air of the garage. An hour ago I was perfectly content sitting on my floor next to a fire, sorting through fishing lures that were to be retired for the season. My silenced phone began to glow and caught my attention:  incoming call, “Drew Reinke.” I knew what the call might be about when it came in around 6:26 pm. Drew’s voice hinted at excitement and adventure before he asked the question – did I want to help him butcher a few deer? “Sure, why not?” I replied.

I’ve never killed anything with fur or feathers. Well, not on purpose at least. I’ve accumulated a small list of hairy and feathered creatures that I feel responsible for the death of:  escaped gerbils, failed baby Robin rescues, and a horrific sparrow murder that I committed using my brothers pellet gun when I was 10 years old (statutes of limitations applied). I was raised in the city, with limited exposure to deer hunting culture and have certainly never witnessed or participated in butchering a deer; a fact that Drew was perfectly aware of. Historically, when given the opportunity to hunt or fish during deer hunting season, I have always opted to fish the rivers abandoned by sportsmen who prefer hunting during November into December.

I arrived at the Reinke residence and soon realized how quickly a single-car garage can be converted into a butcher shop. There was around two inches of snow that arrived earlier that day, which reflected light from the open garage and made the outline of the deer sprawled on the ground easy to identify. The temperature hovered in the low 20s, making things less than comfortable, especially for a bare hand clenching a six-inch knife.

As I initially examined the deer, I began to think about how I would approach cleaning the deer. The thought experiment dead-ended at “no clue.” It was a moment that a new respect for the deer, the sport and the hunter was realized. Butchering a deer is undoubtedly an art; a fantastic life skill to possess. My major contribution was the heaving of the 140-lb. deer toward the rafters from which they would hang for the next few days.

As Drew masterfully navigated the skinning of the deer, we dove into a conversation about the pleasures of knowing where your food has arrived from. His respect for the deer was evident and there was also chatter about the ability to use every part of the deer, something that commercial deer processing operations may be less concerned with. To this end, Drew was receiving pressure from a buddy via text messages to cook the tongue, a proposition Drew seemed understandably apprehensive about.

While a new experience for me, this ritual is unquestionably a rite of passage for so many in Door County and beyond. How many other converted impromptu butcher shops might be in operation right now, I contemplated? Drew and I enjoyed the spoils of the tasty choice meats that were immediately placed on the barbecue. I thanked him for both the experience and the food before returning home to continue sorting lures next to the fire.

A train of small clipper systems from the north have provided small amounts of snow this week and will continue to do so into the weekend. Timing on the arrival of the system and location is variable and will be hit or miss depending on how far south the front dips late Friday night. Temperatures stay below freezing this weekend and it appears the snow stays around in Door County.

Ice fishermen will begin testing ice conditions and a clipper system passing to the north of the area early next week should usher in milder air across the region Monday.

Friday:  Mostly cloudy, with a high near 24.

Saturday:  A chance of snow. Mostly cloudy, with a high near 31.