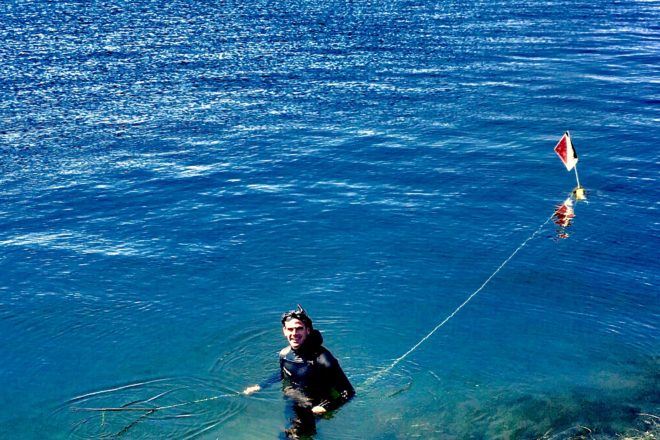 I once discovered and then later rediscovered, that in summer, true silence is unattainable.

Face down in the water, gripping a cold graphite spear, I hovered effortlessly. My controlled breathing sounded like Darth Vader through the snorkel. My eyes wandered back and forth behind my swim mask, looking for movement or shadows on the rocky sandy bottom. As my head became fully submerged under the cool water, sounds were muffled but still not inaudible. I can hear those strolling by in the park chatting about weather and relatives, and I can usually detect the change in cadence when I’ve been spotted. The conversation stops abruptly and transitions into bursts of: “Look!” and “What’s that guy doing?” As I slide deeper down into the water column, muffled music and speech get replaced with the whining and ticking of boat motors.

I’ve come to find that in summer, there is no true silence, not even under water. Maybe in the winter, standing on the edge of a wide frozen lake, there could be a second between breezes and animal calls, and distant freeway zooms, but never in the summer. This is not a recent discovery. I first came upon this surprising fact as a child, playing in my backyard pool. With summer noises streaming wildly all around: screaming cicadas, chatty birds, droning mowers, booming car stereos and the endless calliope of the ice cream truck, I discovered that diving underwater only served as a muffling buffer. I even recall trying to escape the call to come inside for chores or dinner, by slyly ducking under water. The reality is that a foot or two under water, you can still hear very clearly an exasperated mother.

One experiment for escaping this reverberating summer orchestra involved my older brother in the deep end of the pool, standing, balanced atop a five-gallon bucket upside down, filled with air, like a primitive diving bell. I would then swim up and underneath the bucket, gripping the sides with my little pruned hands, while he masterfully held it in place from above. It was one of the better acts out of our aquatic circus show, in which I typically played O’Ryan the dolphin. The orange bucket on my head, I would sit cross-legged under four feet of water. There, I would calmly breathe, recirculating the air until the last oxygen molecule was consumed. Little wonder that I had migraines as a kid, and it may explain a lot of other things too. In the stillness of the stale bucket air, the last remaining inescapable noise, besides the shifting feet on top of the bucket, was a subtle discovery…my own heartbeat. This revelation was met with a mixture of sadness and delight. Was death the only way to truly experience silence? And if you are dead, do you even experience it? And if my brother doesn’t get off this bucket, am I about to find out?! These are deep thoughts for a kid buzzed up on Pop Rocks and Bomb Pops. I can’t help but recall this childhood experience as I pull a large breath through my snorkel and dive deeply into the cool clear waters of Green Bay. Ten feet underwater, floating on the edge of a dark weed bed, I hear the occasional churning of a propeller, as I wait patiently for a fish to pass, and enjoy the near silence.

Weather records for Wisconsin accurately date back 123 years. Only one time in 123 years has Wisconsin received more rain in the first half of the year. While rain is good for replenishing aquifers, restoring water levels and mosquito parties, it presents challenges for farmers and can be a real bummer for having fun in the Door County sun. We can largely thank a shifted jet stream that has been tracking directly over Wisconsin this summer. Allowing for humid gulf moisture to move north until it meets the cool Canadian air. The meeting of the two air masses typically results in rain, sometimes thunderstorms, some of which may become severe. This southerly flow pattern looks to move south of Door County this weekend before colliding with the northern frontal boundary, giving us a much deserved respite from the rain. The temperatures will be pleasant and summery and sunshine will be abundant. Sunday brings the best chance of scattered storms.

Friday: Mostly sunny, with a high near 78

Saturday: Partly sunny, with a high near 75

Sunday: A chance of showers and thunderstorms. Otherwise partly sunny with a high near 75.