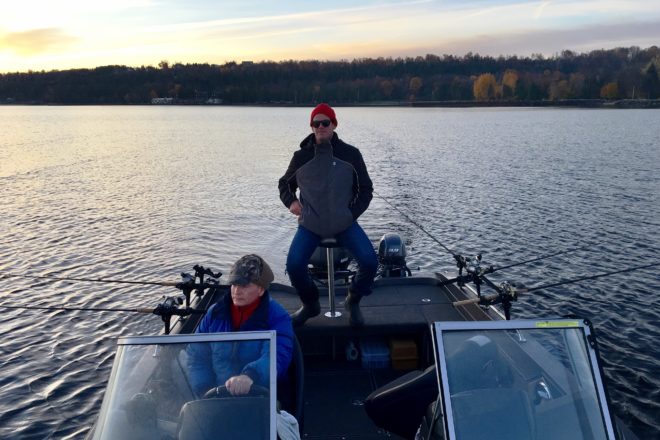 To introduce someone to fishing is always an exciting undertaking. Sharing your passion and, in turn, having a shared adventure is one of life’s great pleasures. Last week, on a cool crisp fall morning, I had such an opportunity. I would be joining both a newbie, and a veteran angler. The instructions for the novice were very simple: be there at 7 am, and wear layers.

We launched from Egg Harbor marina, just before sunrise. Soon the sky was all pastels, a bowl of Superman ice cream in blues and pinks and oranges. A light and steady wind from the south caused a slight chop on the dark waters. These were perfect conditions for the type of fishing we were doing, trolling for anything that would bite.

The poles were laid out neatly in the back of the boat, and it didn’t take long to get out of the marina and begin to set the lines. Lessons ensued, starting with the basics and the mechanics of the reel. I could tell the novice was a quick study, and he immediately showed a dedicated interest. The lines now set, conversation changed to strategy, and confident boasts bounced and echoed across the bay. Fish were caught, and big smiles and high fives were thrown around the boat. Each catch felt refreshingly new, thanks to the presence of the newbie. He studied the markings of each fish, and asked questions that no fisherman knows the answer to, but pretend they do. “Well, the fish are feeding on this prey, at this depth, at this temperature, and prefer this color, blah blah blah.” 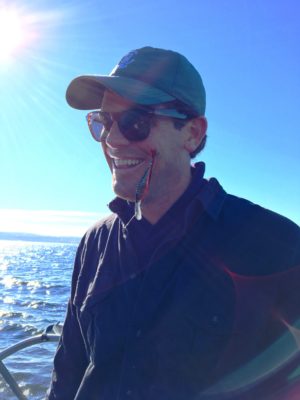 Suddenly, we had all three rods with fish on them; uh oh, this could be fun… or I could be spending the next hour untangling lines. I quickly reeled in the rod directly behind the boat, and I could tell the fish was small, “a shaker.” This is reference to the fact that it’s not even worth bringing the fish on board for pictures, and better to just shake it off the hook.

As I turned to check on the status of the other rods, I could see that things were under control. I turned my head back to “the shaker” and jingle thwack, an object hit the side of my face. It took a second to realize what happened as the fish splashed away. I gently reached toward my cheek, and yep, there was definitely a lure in my face. A gentle tug on the lure pulled the skin a good distance. The other two fishermen were busily securing their prize. I calmly stated, “Hey guys, when you get a second, I mean after you land the fish.” I will never forget the looks on their faces, as they turned from ruddy, wind-smacked red to a ghostly white. Removing fishing hooks from human appendages is not a rare thing for lifelong fishermen. However, a hook in the face is a rare treat and, of course, a great photo opportunity. The hook was removed with surgical precision and, more importantly, all three fish were landed. Fish karma I thought, the day the fish struck back. 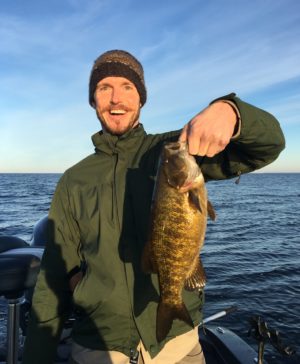 The newbie, Jeff Lutsey, and his prize.

Deer hunters rejoice as temperatures plummet on opening day of gun season. Not only do you get to wear your new hunting gear from last Christmas, the bonus is the low temperatures should keep the deer active. Low temperatures will not be the weather story of the weekend, blustery winds and combined wind chill temperatures will be. A strong storm is expected to move across the region Friday into the weekend. A low-pressure system is to bring strong winds to the area, the first accumulating snow of the season in northern Wisconsin, and much colder temperatures.

As the low moves toward western Lake Superior on Friday, a front will bring a chance of showers to much of the region. Much colder air will sweep into Door County behind the front as winds switch from south to northwest into Saturday. Unstable atmospheric conditions may allow winds to gust to around 40 mph with some potential at this time for winds across northern Door County to gust over 50 mph.

Friday: A 40 percent chance of showers after noon. Mostly cloudy, with a high near 57 and winds ramping up out of the south.

Saturday: Cloudy, chance of rain with a high near 41. Breezy.

Sunday: Partly sunny, with a high near 36.