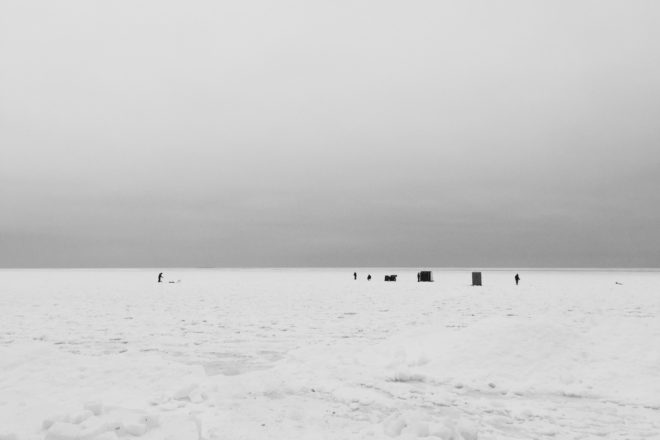 “Why would I go ice fishing? My wife lets me drink at home,” my friend said with a smile and a wink. Ice fishing may not be for everyone, but for some Midwestern natives, the experience can be one of winter’s gifts. The setting itself can be otherworldly. The flat and frozen world spreads out in all directions. The air swirls with glimmering particles and snow drifts form, repeating mounds and bruised shadows. It is so quiet on this lunar tundra, one can really settle down and have a think. 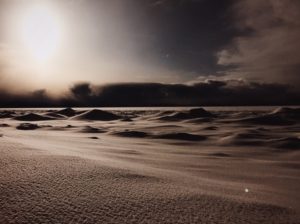 My first foray in Door County began with an unassuming tip, received during a chat with a Door County elder. With an intriguing German accent, he told me how, the previous evening, he had prepared some lovely whitefish for his wife. I politely listened to his preparations and then blurted out, “Where did you get the whitefish?” He told me that a friend had caught them ice fishing. I tried to sound casual, “Oh, who is your friend?” I was given a name, and called that afternoon. “Who is this?” Fishing spots are prized, but this gentleman was kind enough to reveal the general location. I explored the area the next day wearing my standard work garb: sweater, tie and dress slacks. In my loafers, I gingerly shuffled and baby fawned out to the nearest fisherman and attempted conversation. No response, only a head nod. I get it, it must be a good spot. I could see his iridescent catches splayed out on the ice, and that’s all I needed. When I saw him again a few weeks later, I learned that he didn’t speak English. Fair enough, I wouldn’t talk to some imposing guy in his fineries either. I left the ice with plans to return, which I did with my wife Mary. 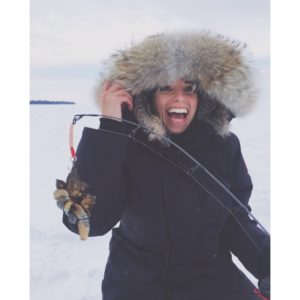 Looking across the icy landscape, it was easy to imagine that a space suit was necessary. “One small step for ice fisherman…” The sun’s light haloed out around ice filled clouds, which glittered and drifted like a smoky mist. On the ground, the temperatures hovered in the mid-teens, which meant that ice was actively forming. The pressure cracks were popping and sounded like a deep, twanging laser. The first pulse was the loudest and the subsequent pulses were higher pitched and echoing. With a hand auger, I selected holes that had only a few inches of ice to get through, having been pre-drilled by fishermen in days prior. I selected the holes with traces of blood around them, a grimy indicator of their successes. It didn’t take long before the first fish was hooked and as it made its way to the surface it caused the slush to break away from the bottom of the ice and rise to the surface of the hole, eight inches in diameter. The golden glimmer of the whitefish shone brightly beneath the slush. I thrust my hand into the freezing mix, just as the fish broke the surface. Taking advantage of Mother Nature’s cooler, we slid the fish over to the side of the buckets that we were sitting on. Other creatures were also brought up from the lake and Mary appeared to have a special knack for catching zebra mussels. Eventually, the stinging cold beat out the setting of the sun, chasing us away from any other prizes that may have been claimed that day. Leaving the frozen silent world behind us, we returned home and I made some lovely whitefish for my wife. 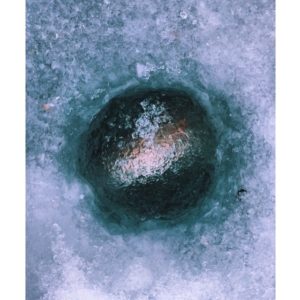 Thanks a lot, Canada! This is said sarcastically for those who don’t like the extreme cold, and sincerely for ice fishermen who are anxiously waiting for thicker ice on the bay. The weekend starts with a blast of cold air dropping down from the polar north. However, temperatures warm up, relatively speaking for Door County, Saturday into Sunday.

Already low temperatures may be lowered to around zero degrees Friday night with fresh snow cover and light winds. A gradual moderation in temperatures is expected Saturday with readings at or above normal Sunday into early next week. An intriguing potent weather system appears to be setting up for early next week.

Friday: Mostly sunny and cold, with a high near 10 and low around 5.

Saturday: Mostly cloudy, with a high near 21 and low around 14.

Sunday: Mostly cloudy, with a high near 27.