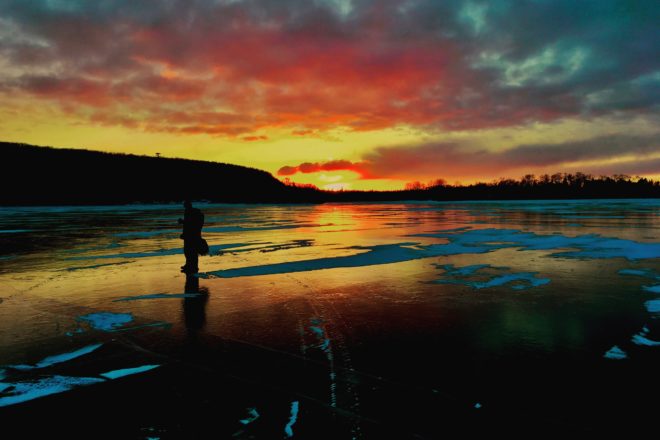 Drew Reinke packs up his gear at sunset in Sturgeon Bay. Photo by Ryan Heise.

A sharp blast of glacial air came screaming through the suddenly opened door, about negative 30 degrees factoring in the wind-chill. A young man, no more than 12 years of age, popped his head into the ice shanty with only frozen eyelashes and a red nose exposed. Crunching footsteps could be heard behind him, and his dad soon towered behind him in the doorway. My friends and I all received the who the heck are you guys look. We were fresh faces to the ice fishermen of Sawyer Harbor for certain, and the fortunate guests of the owners of the shack we were enjoying that day.

After some quick banter and the usual line of fish questioning, the dad signaled their departure by proclaiming it was time for high-noon old-fashioneds. I asked the young man if he was helping make the drinks, to which he responded, “Making them, I’m drinking ‘em.” I could tell by the sly smile that furled up beyond the collar that was protecting his neck and chin that he likely wasn’t joking.

My friends and I were lucky enough to find ourselves in a handsomely adorned ice shanty, lovingly named One Ton. The owners of One Ton (“Hooch” Jason Routheaix and Rob Gay) couldn’t make the outing that day and graciously offered it up for use. One Ton was and is at the epicenter of the cultural experience that is ice fishing. A seemingly constant stream of excited visitors shared stories and reports throughout the day – a few even offered to add some fish to our sad fish bucket.

The ice shack can be spotted miles away, mostly thanks to its exquisite geometry, and flat black finish with electric green trim on the outside. The amusing colors provide a hint to the magic that can be found inside. It is a fisherman’s palace, and once you step in it’s easy to forget that you are there to fish. Wrapped in cozy comforts, we were lost in ever-changing fish stories, and the longer we sat, the more details revealed themselves. Its woodburning stove is a classic element, both well designed and charming. The carpeted bench seating is a rare luxury, which we did not feel deserving of. A quick glance toward the ceiling reveals the card table that is always ready to be dropped down for a game of sheepshead. Decades of ice shanty creation in all its iterations has surely led One Ton to its rightful throne on the harbor. 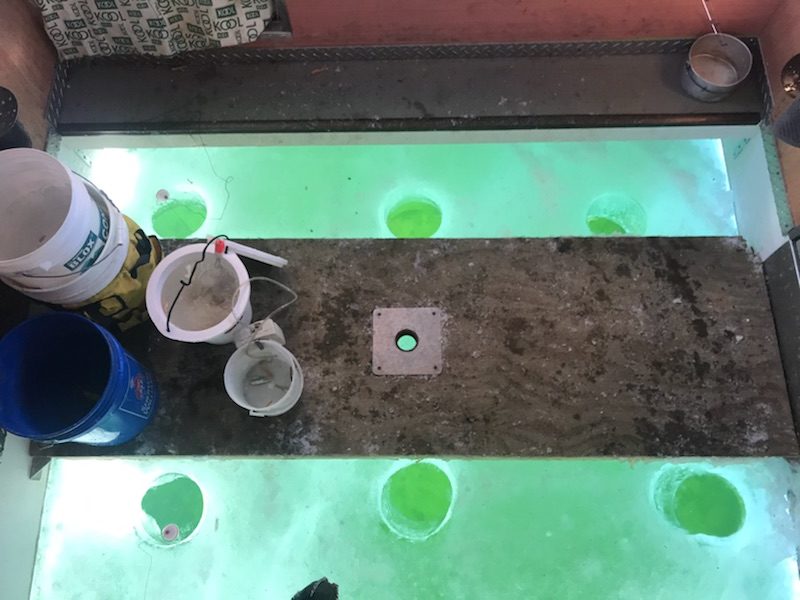 As for the fish, they popped in at times, and it can get wildly entertaining watching four grown men competing for the same fish when it comes lazing around. Thanks to the cold start to the winter, about 10 inches of beautiful, black ice had formed. From inside the shack the water took on a beautiful turquoise green and the clear water allowed us to see the fish as if they were dancing around in an aquarium. The sunlight poured through the windows and was like a beam from the heavens, a blessing from the perch gods.

As the day moved on, the sun made a slow retreat over the tree line, past the neighboring cliff. It was time to leave our comfy palace and return to the frozen world. A sherbet sunset colored ice and sky. As we made our way to our vehicles, the stinging air slapped at our faces, and old-fashioneds started to sound pretty good.

Could it be? Another significant storm on Sunday into Monday? The severity of the storm will be largely dependent on the track of the low-pressure system arriving out of the southern plains. It’s likely that there will be enough cold air via a Canadian Clipper arriving Sunday morning to produce something interesting and meaningful as the two systems greet one another. Friday into Saturday we will see and feel warmer air continue to invade the peninsula. Temps will likely be well above normal for these days, with only periods of scattered to broken mid and high clouds overhead.

Saturday:  Mostly cloudy, with a high near 36.