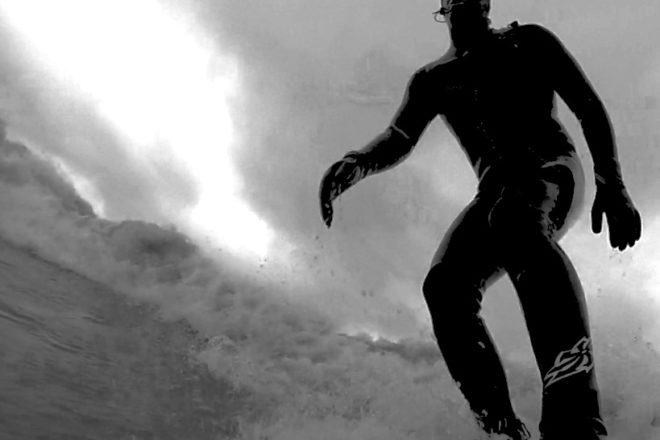 With all modesty, I’ve posted many surfing pictures of myself on social media over the last few years. The picture posted from late October with a headline simply reading “Lake Michigan, October 26th,” seemed to garner an unusually high number of comments: “You’re crazy,” “Brrr…,” and my favorite, “So cool, pun intended, but why?”

It’s a fair question, and I’ve caught myself asking the same thing, the question refraining in my head during the most uncomfortable moments of the surfing experience. For example, while feeling the piercing cold and stony asphalt on my feet while putting on my wetsuit boots. Feet so cold that if it wasn’t for the pebbles jabbing into the soles of my feet, I might otherwise not realize they were still attached to my legs. Then there are the moments when a large wave flushes a new supply of stinging cold water into the wetsuit. It is, as it seems it would be, like an ice cold bucket of water getting poured on you, over and over…

The water temperature is hovering in the mid-50s now, which doesn’t seem too cold until you consider that you lose body heat 25 times faster in water than in air. In fact, without the appropriate gear, reputable sources on the internet tell me that at 55 degrees the expected time before exhaustion or unconsciousness is one to two hours…

Fortunately for surfers of the north, there are cold water wetsuits, but getting into one is like getting consumed by a snake. It requires worming into a hole near the shoulders of the suit and it can be exhausting just getting the suit on. It is nothing short of unnatural for a human to be in water that cold for that long; water that, without the wetsuit, would quickly bring my body temperature down to a point of blacking out.

On this particular fall day, the gloomy sky could do little to quiet the bright fall colors that canvased the shoreline. The waves were as relentless as they were large. A dark colored salmon jumped a short distance away as if to get a look and say, “Don’t see much of your kind out here this time of year.” No sooner did I begin to question my own sanity when it happened. A perfectly formed wave appeared, inviting with its dark green hue and calm rising surface, one of the many gems in the tumbling lake that day. One paddle, two paddles, three, pop-up and the board slid down the face of the wave. After the short ride a smile appeared on my face, and then the answer to the question became obvious…that’s why.

As the clocks roll back, temperatures roll up. A fantastic weekend is on tap as an upper air pattern continues to favor mild and dry weather across Door County. Highs will be about 15 degrees above normal each day, with nighttime lows about 10 degrees higher than usual for this time of the year.

Saturday: Sunny, with a high near 59.