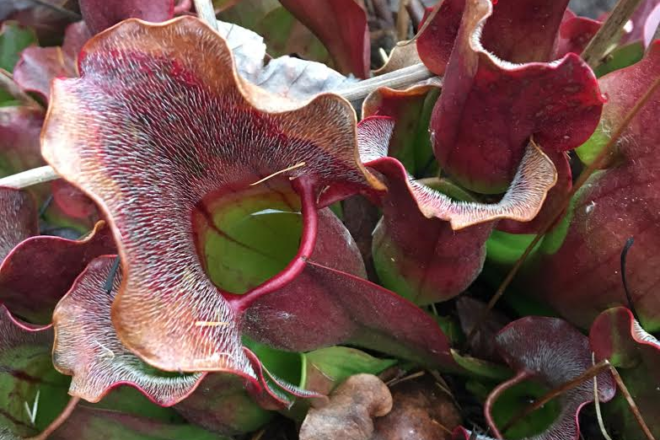 This past Thanksgiving holiday, not only was I lucky enough to spend time with family, but to do so while exploring a rare southern Michigan bog.

My sister Mallery and I wanted to share the experience with the younger generation of the family, and my eight-year-old cousin Brayden was tapped to join us. We arrived to find him pacing on his porch, in his favorite adventuring attire: head-to-toe camouflage. After one squirmy kiss from his mother, our cousin Kelly, he came bounding toward the truck, bundled to the eyeballs. We snaked along colorful country roads. The unusually warm fall had left lots of orange and gold still clinging to the trees, and the grass was still green and thick. As paved roads turned to packed dirt, a bog formation lesson was offered. Mallery explained that this area was formed through glaciation, that it had no source of nutrient-bearing water, and that its acidity encouraged the plants to find new ways to acquire nutrients. Brayden’s eyes glazed over, so she brought out the big guns: Pitcher Plants and Sundews eat bugs. 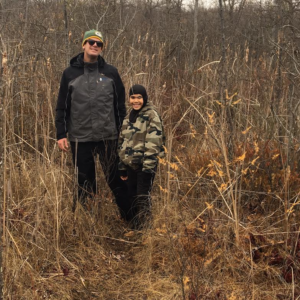 Ryan Heise and his nephew, Brayden. Photo by Mallery Heise.

We arrived to a nearly empty parking lot and hopped out into the stillness of a cold grey day. A series of trails took us down through hardwood swamps and back up through old stands of smooth muscled Beech. These were lucky trees, having survived many cycles of forest fires, thanks to the surrounding swamps. Eventually we arrived at a sturdy boardwalk, constructed to take us deep into the bog itself. As it was the end of November, I was worried that the Pitchers may have gone dormant and receded back into the thick mosses. After we initially passed through some dark Leatherleaf and Bog Rosemary, the bog opened into mound after mound of beautiful red and green Pitcher Plants. Brayden timidly poked and prodded the water filled pitchers, dropping in bits of nearby detritus, probably hoping for some sort smoking acid disintegration. When his experiments concluded, we turned our attention to the end of the boardwalk. Who would be the first to risk stepping onto the floating island of vegetation?

Mallery was a frequent visitor here and knew she could trust in the strength of the thousands of years of decaying and intertwined material that supported these Sphagnum beds. Wide eyed, Brayden was next. He precariously stepped onto the floating mat and almost immediately began bouncing up and down, shaking the bog all around us. “How cool, I’m moving the earth!” Soon we were all joining in on the act, bouncing around on what felt like a firm waterbed. I was confident that there was a family of deer watching nearby, “I told you they would start hopping around like rabbits. Every time, never fails.” 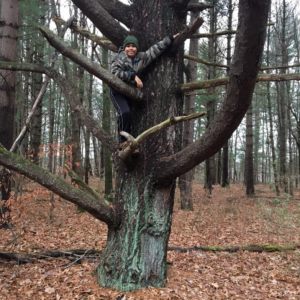 Brayden scaling down a tree. Photo by Mallery Heise.

Brayden and I pushed on, using a soggy deer path, through the Tamarack and bog shrubs, finally marching into a thick jungle of cattails. We found ourselves perfectly isolated in the middle of the bog, no signs of humanity, and only quacking ducks to tell us which way to the lake. I convinced Brayden to scale one of the scraggly Tamarack trees, and with my help he climbed hand over hand avoiding the many sharp pencil-like branches. “I can see the water! But you’re crazy if you think I’m going any further,” he said, laughing with his head tilted back to the sky. We doubled back and bellowed for Mallery, whom we had left behind to take pictures. As we made our way back to the truck, I noticed Brayden jumping up and down, looking disappointed that he had lost the power to shake the earth.

The weather this weekend will feel like living in northeast Wisconsin in December. I’m not saying the winter hammer is falling, but it will be cold with below average temperatures and we will have chances for snow. Our lake effect cold air buffer will be fully activated in Door County, keeping us around five degrees warmer than our inland neighbors over the weekend. Friday night will be the coolest of the weekend with temps in the middle-teens. Winds turn southerly on Saturday, but don’t expect a tropical breeze. There is a good chance of snow Saturday afternoon with little accumulations predicted and highs in the mid-20s. Sunday will be the warmest day of the weekend with temps hovering around the 30-degree mark. Sunday also brings with it a better mix of weather conditions to create a small snow event. Weather chatter reflects mixed reviews on the timing and the track of the snow maker for Sunday.

Friday: Partly sunny with a high near 26 and a low around 15/

Saturday: Mostly cloudy with some snow, a high near 25 and a low around 23.

Sunday: Snow likely with a high near 31.