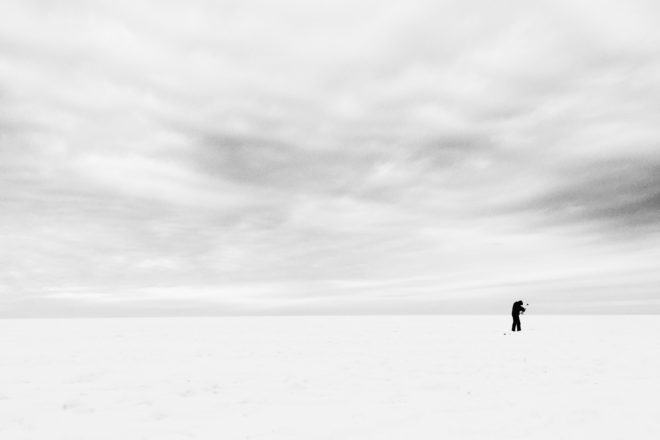 Ryan Heise on the bay of Green Bay. Photo by Mary Heise.

It’s 6:30 am, and I’m standing barefoot in the backyard. The temperature is one degree…one. It’s twilight, and to my left, I can begin to make out the rich green needles of a white cedar. Four inches of crystalline snow blanket the ground, cover my feet and brush my ankles. I lean over and gently scoop a pile of snow into my hands, stand up, and press it into my face. The snow quickly melts and the bracing water drips down my neck. My dog, Ruby, having watched the new ritual for the seventh time, pounces around in exaggerated circles.

As I walk back into the house, Ruby squeezes in the door behind me, curious about my next move. I stand on the hallway rug for a few moments, drying my feet, before moving on to the bathroom. It’s there that I give myself a good onceover in the mirror, my face damp and ruddy. This new routine is necessary, I tell myself, it’s all part of the training. It’s one small part of the preparation for the walk across Green Bay, to take place in a few short weeks.

Well, to be honest, the preparations are few right now and my Green Bay ice knowledge is equally scant. However, a proper planning meeting is scheduled to occur one night soon, with my friend, Jeff, and two others who have been recruited for the journey. Our planned route is from Egg Harbor, Wis. to Menominee, Mich., about 15 miles (according to Google Earth). What started out as an adventurous lark, dreamed up over summer beers with Jeff, is starting to take on the bracing reality that only a north-country winter can provide. There is, however, a new purpose for this walk, and so I’m doubling down.

I plan to use this trip to bring awareness to the Back 40 Sulfide Mine, proposed to be located on the Menominee River. The Menominee – it’s closer than you think.

The Back 40 Mine is a proposed open pit, metallic sulfide mine, located on the banks of the Menominee River in Lake Township, Michigan. The development company, Aquila Resources Inc., is Canadian based and is seeking its fourth and final permit from the State of Michigan. The Menominee Tribe has filed a lawsuit in federal court against the U.S. Army Corps of Engineers and U.S. Environmental Protection Agency. The tribe asserts the waters and associated wetlands are interstate federal waters and that federal agencies must have the primary role in the permitting process. The potential damage to the cultural and economic value of these waters is real and given Door County’s proximity to the mine, we should be aware. 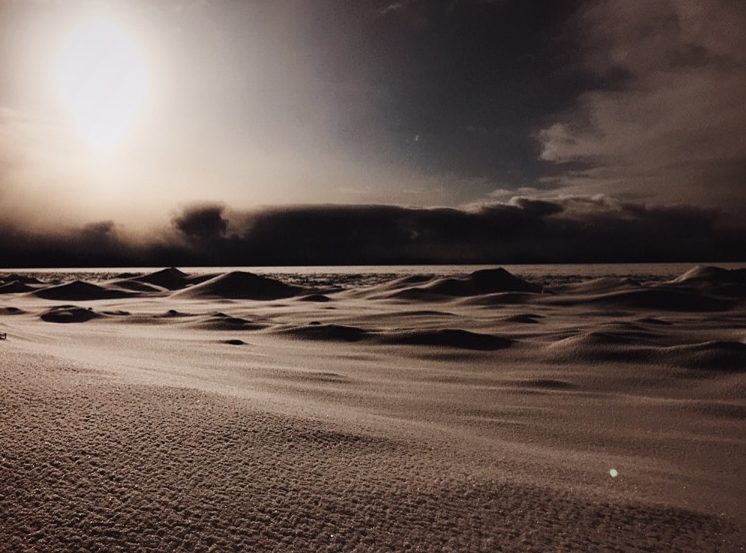 A snowy landscape over the bay. Photo by Mary Heise.

So far, my list of precautions consists of:  providing our route to the Coast Guard, having a buddy with a snowmobile on call, carrying ropes, hand spikes (allow you to grip the ice should you fall in), snowshoes (maybe), and a ladder (maybe). The idea of needing a ladder is a bit unsettling. In which situations do I need a ladder:  Crossing pressure cracks with open water and screaming currents, or scaling towering shove ice? Both scenarios seem sketchy, but only exist in my mind, for now. All part of the adventure I suppose.

I phoned the Coast Guard last week and made some inquiries into the ice breaking schedule, which seems to be the real safety wild card. After telling them my plan, there was a long silent pause. “I’m sorry sir, what did you say you are doing? Umm…no…no, you shouldn’t do that.” I understand I probably shouldn’t do it, and I will add the Coast Guard’s deep concern to the list, right after my parents’. My next phone call was to my buddy at the tackle shop. Another long pause, but the general response was much more positive. “You’re doing what? Yeah, OK. You’re not going this weekend…OK good…ice cutter is supposed to be out.” He even proposed an alternate route, and I thanked him and said I would keep him posted.

For now, my training continues, and I look forward to tomorrow’s pile of snow in the face, as does Ruby.

The main story for this weekend will be the slow moderation of temperatures along with the chances of light snow Saturday into Saturday night across central into east-central Wisconsin. Don’t get too excited about the rising temperatures – they will still remain below average or around average into early next week. The Saturday snow system is hit or miss, and current model agreement has the system sliding by Door County to our south, but that can change with the weather.

Saturday:  A chance of snow after noon. Mostly cloudy, with a high near 17, low around 7.