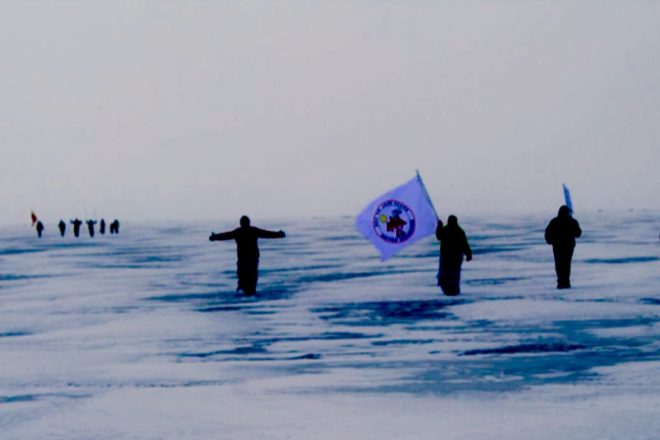 The crew arrives in Menominee. Photo by Wayne Swett.

It was a sleepy Saturday morning in the quaint and still Village of Egg Harbor, cars could be heard crunching through the snow as they filed one-by-one through the village and down the steep hill to the marina. The sun shrouded in misty grey clouds had barely lifted over the surrounding hills to greet the small group that had gathered. Four of us rolled out of our vehicles, weighed down with layers of clothes and heavy equipment that had been packed the night before. Today was the day that I and three others would attempt a 15-mile trek across Green Bay from Egg Harbor to Menominee, Mich. The arduous walk through snow and ice was to demonstrate the relative proximity of Door County to the proposed Back 40 Mine, to be located on the banks of the Menominee River.

Three well-wishers joined the group to see us off, and they shared in the excitement and laughter as we placed the final touches on our gear before walking off. Jeff Lutsey, fellow adventurer, was immediately coined the “Wolverine” due to his makeshift ice picks, which were made from equipment procured at the local hardware store, and which he had duct taped to the bottom of his coat sleeves. Laugher erupted and echoed around the harbor and off the rock escarpment in the distance as Jeff posed as the Wolverine Marvel Comic character. Other less makeshift preparations included:  rope (floating rope), ice picks, a borrowed GPS unit, a few compasses and metal studs that were strapped to the bottom of our boots. Also with us was a bright orange flag that was four feet long attached to a tall carbon fiber pole that read “NO BACK 40.” This flag also was adorned with tiny water creatures drawn by Everett Nellis, son of Jared Nellis, a great friend and Door County fly fishing guide. Everett said that he was devastated to think that the Back 40 Mine, an open pit sulfide mine, could harm his beloved crayfish.

As we left the comfort of the shore, the winds were immediately identified as an annoyance, if not an obstacle, sustained at 11 to 14 mph, and gusts on the open bay up to 25 mph. Five minutes into the trip we encountered our first impediment, a pressure crack that must have opened up the night before, shifting its massive weight and exposing dark open water. Solid and sturdy ice was observed on both sides of the opening, and a giant step over the crack was all that was required. Besides the wind, it quickly became evident that we were trudging through three to four inches of hard, packed snow that gave way under our weight, which was the equivalent of walking on a sandy beach.

Our heading was due west, more west-north-west. We anticipated that halfway through our journey we would encounter the shipping channel. During the weeks prior, the shipping channel became the focus of our anxiety as not a single person could report with reliability or accuracy on its condition. We were relentless in our calls to the Coast Guard. We knew that an ice cutter had gone through weeks before. What we didn’t know was if the ice had reformed into a solid and safe state. The telltale sign of the shipping channel appeared on the horizon at about the time we predicted. Giant slabs of ice, all shapes and sizes, jetted out in all directions for a span of 50 feet, and did the same another 50 yards ahead. This is where the cutter had been through. “Into our positions, men, this is what we’ve been training for,” I bellowed, with an apprehensive laugh. We were prepared for an ice rescue, not wanting to have to rely on emergency services.

We delicately continued our march forward and quickly determined the channel had safe ice. We took advantage of a large triangular ice chunk protruding proudly as a windbreak, settling in to have a quick snack. Resting too long was a bad idea; wind and cold were quick to take advantage of the respite. Muscles began tensing up and we all knew to keep moving with our heavy backpacks, which we all determined were overpacked at this point.

Snow was predicted to arrive in the afternoon. Our course was fairly easy to navigate for most of the day, thanks to a giant smokestack on the Menominee side that acted as a guiding beacon. It worked great until it disappeared along with every other island and piece of shoreline. There were no distinguishable clouds that brought the snow; it just came. We were engulfed by whiteness. Imagine closing your eyes and spinning around and the only thing that could provide a hint of your orientation when you reopen them are your foot tracks that are drifting away in the blowing snow. We remained close to one another, but no longer cared to walk within ear shot. This was mostly due to exhaustion and each of us constantly stopping to check compass coordinates. There were two hours of slogging toward shore in the whiteout conditions. While we were able to maintain a general heading, I later discovered our serpentine path had added two miles to the trip when checking the popcorn trail on the GPS unit.

Shadowy images gradually appeared on the horizon, the snow intensity fluctuated, and the dark shoreline buildings and trees faded in and out of sight as we approached. The whipping snow soon relented as we neared shore. A car, a man (who I learned to be named Scott) and his dog came into sight; the dog was the first to welcome us to Michigan. Scott showed us safe passage across a large pressure crack, which was about the same distance offshore as the one we first encountered on the Wisconsin side. A large truck was sighted rumbling across the ice, sending snow flying into the air. “Must be Budda,” I said. Budda was a new friend and experienced fishing guide who I relied heavily on for local ice condition reports the week leading up the crossing. Budda and two of his friends offered hearty handshakes and beer. More and more people spilled out onto the ice with cheers. “No Back 40” and “Welcome Door County” signs were lifted and bounced around with excitement.

As a larger number of people gathered near the shore, women from the Menominee Nation shuffled carefully onto the ice, proudly flying their Nation’s flag and offering a water song in their beautiful native language. Our house hosts for the evening, Dale Burie and Lea Jane, were there too, along with 30 to 40 others from the Save the Menominee River Coalition. Having made it safely across it was time to reflect on the trek and the mission of raising awareness of the proposed mine.

For Friday, we can expect freezing rain and/or snow. Totals Thursday night through Friday morning should range from less than an inch from the Fox Valley east to Lake Michigan. Looks like temperatures will warm up enough on Saturday to switch any snow to rain or a mix of rain and snow before precipitation changes back to snow Saturday night before it exits the area. Mainly dry weather is then expected into early next week

Saturday:  Partly sunny, with a high near 36.

Sunday:  A chance of snow showers, mixing with rain after 11am, then gradually ending. Partly sunny, with a high near 37.