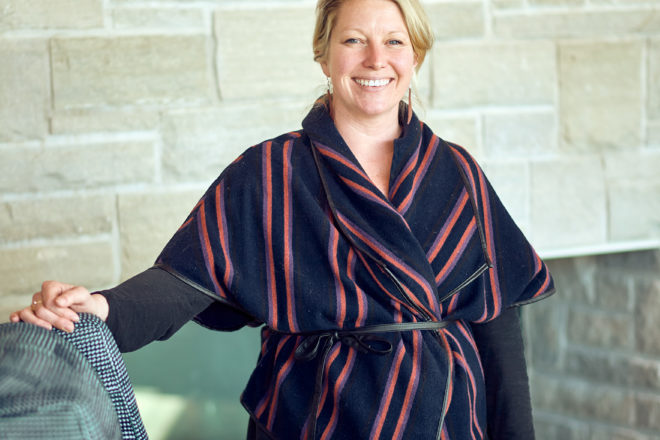 Jess Reinke where you’ll often find her, planning events at the Kress Pavilion in Egg Harbor. Photo by Len Villano.

There’s a movement in small, rural regions to change the way they build their communities. Such places typically cannot build strength, resilience and success through jobs and wealth, but instead, they can build them through relationships: the essential fabric that ties them together in caring ways. Academics call this “social capital,” but Jess Reinke is too busy weaving that fabric to think about what others call it.

Reinke, who’s originally from Somerset, Wisconsin, came to Door County in 2015 after a marketing and event-planning career in Portland, Oregon. Her relationship to the county follows a classic narrative: After visiting as a kid and seeing wonders such as Schoolhouse Beach and the downtown districts of a bygone era, she found a way to call Door County home decades later.

Sitting in the natural light of tall windows on a late-winter afternoon at Egg Harbor’s Kress Pavilion — where Reinke is the property manager — she speaks casually, as if this was the first time she had been asked to talk about her role as a community changemaker.

“I love building something and making it great,” Reinke said. “But I like doing it from behind the scenes.”

One way she does that is through Door Collectivist, a group that provides support and resources to underrepresented candidates for local government. Although the group advocates for candidates from any age group or background, it has been particularly popular with candidates who are younger than those who typically sit on local boards.

“I think that it’s going to be really important for young people to have voices in this county,” Reinke said. “It’s bringing voices to the table that are more representative of our community instead of having the same people who keep running. It’s about getting people excited and letting them know that they can really make an impact in their community.”

Door Collectivist provides campaign support and helps aspiring candidates to navigate the election process and practice for public forums. Reinke has a simple and obvious reason why it’s important for younger people to get involved in their local governments.

“There are various projects that have happened around the county where, if people don’t show up and give their input or their perspective, then their wishes won’t be considered,” Reinke said. “We’re the next generation here, and we have the ability to shape the growth of our county.”

Reinke sees that mission as being similar to her role at the Kress Pavilion, where she’s served as the first and only property manager of the beloved library and community center since it opened in 2018.

Programming so far has ranged from movie screenings to 3-D printing workshops. Now, with some time and experience under her belt, Reinke hopes to expand that programming to include more activities that mesh with the community’s interest in sustainable living and civic engagement.

“Door County is such a hands-on community,” Reinke said. “And the Village of Egg Harbor is excited about green living and sustainability, so that makes me excited, too.”

“Her passion for protecting the environment and providing experiences that truly enhance the quality of people’s lives are not teachable skills. She just has it,” said Egg Harbor Village Administrator Ryan Heise.

Through the work she’s done cultivating community, Reinke recognizes that it’s often the loose, informal groups that drive a sense of togetherness among community members, such as a group that takes over a corner of the Kress each week to knit. A favorite example for Reinke is the cleverly named Girl Stouts, who gather around the county once a month to taste unusual dark beers. Door Collectivist also had a similar start, with a few like-minded people who simply wanted to make Door County a better place in every way they could.

Reinke credits her can-do attitude for her eagerness to support anyone with an idea, no matter how wild it seems at first.

“I feel like a lot of people, they have it within them, but they just don’t have the confidence,” Reinke said. “I think it’s my job to jump in and be like, ‘No, we’re going to do this, and this is how we’re going to make it happen.’”

“The youth, passion, creativity and willingness to try new things adds so much value to not only Egg Harbor, but also to Door County,” Heise said. “Door County is lucky to have Jess.”

In Bowling Alone — the modern tome about social capital and the revival of American communities — author Robert Putnam argues that the more social groups and associations (including bowling leagues, and thus the book’s title) there are within a community — no matter how well defined — the greater the quality of life for its residents.

These groups are the essential strands that make up the fabric of community, and it’s precisely people such as Jess Reinke who weave all of these strands together.