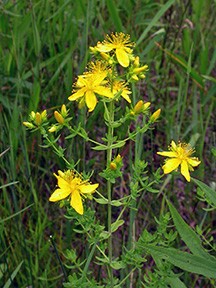 Abraham Lincoln said, to the effect, that God must love the common people, he made so many of them. Perhaps that same general thought can be applied to the weeds, especially those that flower in August producing acre after acre of dazzling expanses. Some of the most conspicuous and beautiful include the Chicory, Spotted Knapweed, and Queen Anne’s Lace.

No species of wildflower, alien invader that it may be, brings more questions during this season than the delicate light purple weed with the gray-green foliage and stems, the Spotted Knapweed, Centaurea maculosa (mack-you-LOW-sa). Judging by its great numbers, this fairly recent newcomer (during the past 50-60 years) has found a very suitable home in this part of the state.

Its relatives, found in cultivated gardens today, include the Bachelor’s Button, Corn Flower and Dusty Miller. Old timers claim that this successful weed has not been in Door County more than 55-60 years. East of the Mississippi River it is limited, and to the northeastern quarter of the country it is not abundant. The northern half of Wisconsin, northeastern Minnesota and Michigan appear to be the area of its greatest concentration.

Like most members of its large tribe, these wiry plants seem to do best and blossom most profusely when crowded in sunny sites. They thrive in dry gravelly soil where there is a lack of competition from other plants. Provide the weed seeds with these three factors and you’ll have lots of flowery company.

The “Queen” surely reigns supreme over ditches and neglected fields and fence-rows, Queen Anne’s Lace. The world’s experts in the manufacture of lace may reside in Belgium or Italy but the queen of the lace-maker’s art also graces practically every roadside, waste place and dry, unused field in eastern United States. A queen’s title was too good for many farmers who lowered the name to Wild Carrot, Bird’s Nest Weed or Devil’s Plague. 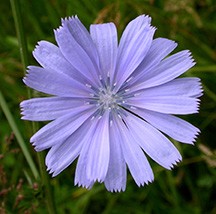 Much of its success can be traced to the simple fact that it is a biennial capable of producing upwards of 7,000 to 8,000 seeds per plant of nine or 10 flower heads. The seeds usually germinate in late summer and fall. The next year a small rosette of feathery carrot-like leaves and a rather thin fleshy root develop. This strong starchy taproot easily survives the winter and will mature the following summer into the magnificent flowering plant.

A weedy wildflower whose delicate blue color clashes with the lavender-purple of the Spotted Knapweed is the Chicory, sometimes called the Succory or Blue Sailors. Backlighted by the early morning sun, its delicate blue petals shout for attention.

The bitter root of the perennial herb, native of Europe, has been used as an additive to coffee for many years, especially in the South. Whether this produces a favorable improvement or a distasteful adulterant is up to the coffee drinker.

A native weed that is widespread throughout our state, providing food to hundreds of species of insects, is the Common Milkweed. Their sweet smelling bell-like clusters of pinkish flowers are a haven for budding naturalists studying insects. The fact that the caterpillars of Monarch Butterflies feast upon only the leaves of this and other milkweed species places these plants high on the list of important wild animal foods.

Adding contrasting yellows to the blues and purples are the Common St. Johns Wort and most of the Goldenrods in the weed group, while the Black-eyed Susan, not nearly as aggressive in its tendencies to spread and multiply, would fit most people’s descriptions of a beautiful wildflower. 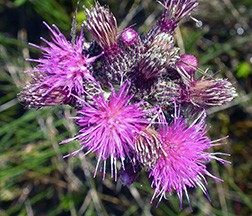 Spotted Knapweed flowers are beautiful to look at but the plant is rough and very uncomfortable to touch.

Rarely will you see wide expanses of the Black-eyed Susan (a Rudbeckia), while it is common to observe patches of the coarse St. Johns Wort and Goldenrod by the acre.

There have been many attempts to differentiate a weed from a wildflower. I agree that broad vistas of weeds, such as the Ox-eye Daisy, Orange Hawkweed and Queen Anne’s Lace are very pleasing sights. A bouquet of them is extremely attractive.

Perhaps the best definition states that a plant is a weed when it grows where it is not wanted. They are not intentionally sown and possess more undesirable than desirable qualities. Some are known to clog lakes and streams, serve as hosts for crop diseases, and affect people’s health. Ask people who suffer from hay fever. They’ll tell you all about Ragweed, one of the very worst weeds in the world.

Goldenrods, on the other hand, soon to decorate the landscape in our region, have been hopelessly misunderstood for years and are not the plants responsible for making people sneeze as is the Ragweed. Goldenrod pollen is waxy and too heavy to become airborne. It can’t possibly be carried by the wind to people’s noses. Ragweed pollen is easily carried by the wind.

Learn the bad along with the good. Many are beautiful, can be freely picked, and are interesting to study. Even though most are aliens, as were our ancestors who very likely brought the weeds with them, these weeds are here to stay and we might just as well make the best of them!