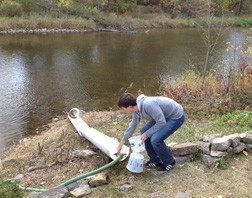 1_Last weekend was a big one for my girlfriend, Kat Prince, and her co-workers at the C.D. “Buzz” Besadny Fish Facility in Kewaunee. They hosted their semi-annual open house on Oct. 6, where visitors could come in and learn about Besadny’s sturgeon re-population and salmon spawning activities.

One of the new features of this year’s open house was an Adopt-a-Sturgeon program. For five dollars, you could release a tagged sturgeon into the river, and you received a nifty certificate. If the DNR ever finds that sturgeon again, they’ll contact you and tell you what the probably not-so-little-by-that-time guy’s been up to. Adopt-a-Sturgeon was a big success, with about 250 sturgeons adopted.

Although there’s not an open house every weekend, Besadny is open to the public most days and available for tours for schools and other groups. I think the girl that leads the tours is pretty good at her job, but then I’m biased. 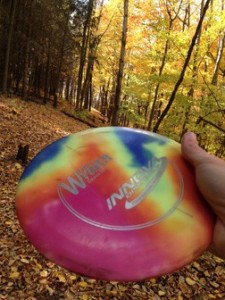 2_ After showing up at Besadny for moral support, I ventured out into the woods surrounding the facility to get some disc golf in. The Winter Park Disc Golf Course has 27 holes that I have never managed to actually play in anything resembling the right order, as I hop around in the woods and veer from the prescribed path.

My favorite hole at Winter Park is 15, which has a tee that looks out from a giant hill and a hole that rests at a flat expanse at the bottom of the hill. It’s a climb to get there, but incredibly enjoyable to watch your disc sail down from the top of the hill.

Skill Note: Even with the creek beds all nearly empty, I managed to land my disc in water. This would be why I usually play by myself. 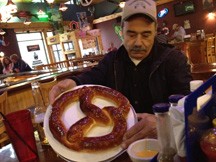 3_ After Kat finished up at Besadny and I finished throwing things at other things, Kat’s parents took us out to dinner at the Steelhead Saloon in Algoma. The special appetizer there this month is the largest soft pretzel I have ever laid eyes upon. I believe the saloon got a special deal on them after a catering company for giants realized they had too many lying around.

4_ My Sunday was spent in Green Bay with some of Kat and my’s friends, watching the Packers blow another early game lead and wandering around downtown.

In the Neville Public Museum, I came across this model of the U.S.S. Green Bay, and I found out that both the model and the actual ship were built in Sturgeon Bay. It seems our shipbuilding industry’s not content to simply excel at building life-size ships… 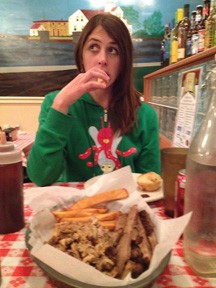 There are a number of great exhibits at the Neville right now, including one on Hmong culture and heritage and the gallery’s 68th annual juried art show. If you get the chance to swing down to Green Bay, it’s a great, informational activity, especially for those on a budget.

We split a so-called sampler of beef brisket and pulled pork, and it was more than enough food for the two of us. Everything was delicious, but we both absolutely loved (and devoured) the cornbread.

Also, any establishment with a Blues Brothers and Elvis poster hanging on the wall is going to score automatic points with me. You can bet we’ll be going there for dinner again.