1_Following the Friday workday, Pulse employees Carol Thompson, Matt Ledger, and Sally Slattery found themselves in the big city – catching a flick at Sturgeon Bay Cinema 6 and enjoying some live music/comedy at the Lodge at Leathem Smith. 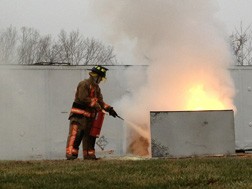 Pat McCurdy entertained a crowd of locals, who all seemed to know McCurdy’s trademark song, “Sex and Beer,” complete with a simple-to-learn dance.

2_Saturday morning, Ledger, along with other firefighters in training, traveled down to Northeast Wisconsin Technical College in Green Bay to practice at the “burn tower,” a two story building where trainees built a fire and ran through search and rescue and firefighting drills.

So, you know, a pretty typical Saturday for Ledger.

3_Saturday afternoon, Thompson stopped by Blue Dolphin House in Ephraim to check out their end of the year sale. There she noticed that Vic Firth, a choice drumstick manufacturer, is now making kitchen gadgets. Apparently Vic’s commitment to high quality drumsticks and mallets translates well to salt and pepper mills. Are they still pitch paired?

4_ Saturday evening, Alissa Ehmke and her son Dempsey enjoyed Christmas festivities at the Baileys Harbor tree lighting ceremony. Dempsey met Santa for the very first time, and seemed genuinely terrified. Dempsey also ran into Nora (one of his Shrimp Dip buddies) and made some pinecone ornaments with Mormor.

5_Saturday night, after watching the Badgers destroy the Cornhuskers, Slattery strained her vocal cords in passionate renditions of “Son of a Preacher Man” and “Hit Me with Your Best Shot,” at Peninsula Pub’s weekly karaoke night hosted by DJ Hope Reyes. 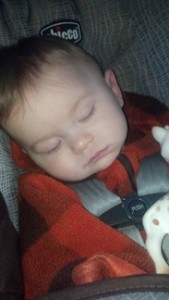 Fellow singers entertained the crowd with epic performances of “Raspberry Beret,” “Copacabana,” and “Sittin’ on the Dock of the Bay.”

6_Allison Vroman’s advice: “Invite your sister and too-cute nephew up for a weekend of family fun in Door County. After playing with some blocks, reading some books, and eating great meals (or pureed squash) together, we headed out for a little Christmas gift shopping. My sister had great luck at Island Orchard Cider, where she purchased bottles of hard cider, and then we continued down the road to Ellison Bay Pottery for wine chillers to ‘wrap’ them in. By the time Sunday afternoon rolled around, we all needed a nap.” (Photo by Andrea Hudack.)