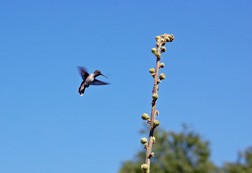 My weekend begins and ends on the fly

• It started late Friday morning when I finally got a decent photo of what I believe is a female Rufous Hummingbird that has darted in and out of my consciousness all summer through the office window as it hovers momentarily at the various backyard flowers. Usually when I see it, by the time I grab my camera it is already gone. The chase is over now. I got a half-dozen shots of the little beauty. 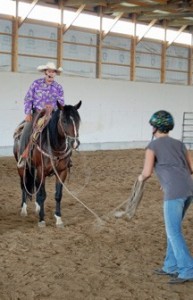 • I had a full Saturday, first stopping at Chewy Jaugerui’s ranch on County A, where Chewy was giving a horsemanship workshop to eager students and their horses. When I arrived the students were practicing their roping skills on a wooden steer, under Chewy’s guidance and encouragement. Then, in example of how you have to make your horse comfortable around a rope, Chewy stood on his horse and encircled himself and his mount in an impressive display of rope skills that drew applause from students and the audience.

(If you want to know more about Chewy’s horsemanship workshops, visit horsemanshipsranch.com. Also, look for a story on Chewy and his involvement in the documentary Wild Horse, Wild Ride in the fall issue of Door County Living, which hits the streets the first week of September.) 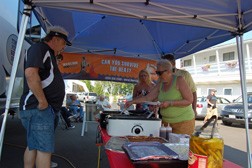 • From there I went to the Beachfront Inn in beautiful downtown Baileys Harbor, where owners Tammy and Terry Bork were throwing a BBQ party for the folks who were involved in the makeover that will be featured this fall on the Travel Channel series Hotel Impossible (the episode is scheduled to run on Monday, Sept. 30).

The BBQ – brisket, pulled pork and chicken – was provided by Tim’s Full Belli Deli, a competition BBQ team from Oshkosh. You can sample their delicious BBQ this weekend at the Death’s Door BBQ on Washington Island. Tim Schopp and crew took 7th overall and 1st in Sauce, 3rd in Chicken, 6th in Brisket and 8th in Ribs at the first Death’s Door in 2012. The sauce is they won with is Death’s Door BBQ Sauce, which is owned by the Borks. Tim’s Full Belli Deli crew is looking to do well in all four categories this year, which, in addition to what they cooked on Saturday, includes ribs. “We do all the garbage cuts of meat and turn them into delicacies,” Tim said.

(Look for a longer story about Death’s Door BBQ in the Aug. 23 Peninsula Pulse.) 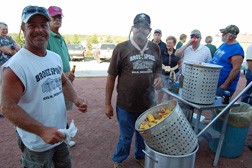 • My final stop for the day was at Beantown Campground in Baileys Harbor, where a group from Kiln, Miss., was staying. They brought 150 pounds of Gulf Coast shrimp with them and threw a shrimp boil at the campgrounds for all the folks who helped as part of the Door County Gulf Coast Relief Fund.

In 25 trips to Hancock County, Miss., the Door County volunteers put 55 people back into homes in the aftermath of Hurricane Katrina. The shrimp boil was just a sample of the lasting friendship that developed between the two communities at opposite ends of the country.

The shrimp boil was spicy and delicious and the camaraderie was deep and sincere. Pete D’Amico, the Door County man who organized the relief effort, took the Mississippians to the Valmy Thresheree earlier Saturday. They took part in the tractor pull on used tractors and managed to take a couple of awards. Steve Haas, owner of the Broke Spoke in Kiln, Miss., took first place in his category.

A special thanks to the fellow who gave me the moonshine samples to take home. I’m going to enjoy those. (Look for a longer story about this special relationship between the people of Kiln, Miss., and Door County in the next Peninsula Pulse.) 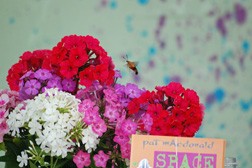 • On Sunday I attended an event of the Egg Harbor Book Festival at the Peg Egan Performing Arts Center when a Hummingbird Moth – or Hummingmoth –flitted into the speaking area and hovered around a floral centerpiece between the host and speaker. I’ve never seen one of these creatures before. This shot shows the curled proboscis it uses to extract nectar.