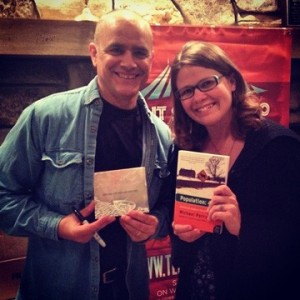 “All the world’s a stage,” wrote William Shakespeare. And I should know, I made a weekend of being on and off them. 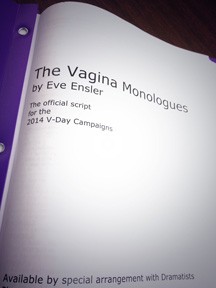 2. Saturday afternoon, disoriented butterflies whipped about in my poor tummy. I, along with nine other Door County women, stepped up on The Depot Performing Arts Center’s stage and performed The Vagina Monologues for a diverse crowd of young and old, male and female.

I, once again, felt a deep respect for the women on the stage with me (it’s not easy to stand up in front of your community and deliver monologues about vaginas), as well as HELP of Door County for all the services and advocacy they offer to the community.

3. I experienced another powerful show on Sunday, this time from the comfort of a theater seat. Though the subject matter was anything but comfortable.

Stage Kids of Third Avenue Playhouse presented their final performance of columbinus. Eleven wildly brave and incredibly talented Door County high school students took on complex characters struggling with life, with high school, but most of all, with themselves. They swear. They bully. They cut themselves. They turn to god. They turn to violence.

The show, scripted from interviews with students from across the country, takes a look at these students’ thoughts and daily lives before digging deeper into the lives of the two students who emerge to become the shooters at Columbine High School in 1999, Eric Harris and Dylan Klebold.

Raw, chilling, and brilliantly done – the play raises questions, most of all, “Why?” The actors, director, and community members participated in a talkback with the audience to discuss and process the play.

I’m still reeling from the emotions that arose during the show, surprised by the amount of sympathy I now feel for Dylan and Eric, for every student who feels alone, overwhelmed and uncomfortable in their own skin. (I was right there once myself.)