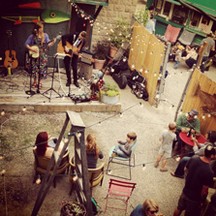 1_The weekend unofficially began on Thursday, June 12 – that’s when I let my hair down anyway. After work, I zipped down to Sturgeon Bay. My first stop: Greco Gallery. 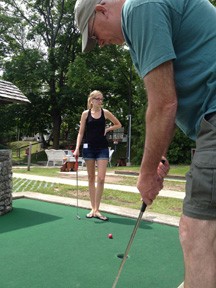 2_Then we took opening night of Steel Bridge Song Fest by storm. We caught shows at The Red Room, Poh’s Corner Pub, and Cherry Lanes, including a performance by Eric McFadden (left) and pat mAcdonald.

3_After a few cups of coffee, I found some energy and prepared for my family’s arrival on Friday. Two sisters, a brother-in-law, and my father rolled up the peninsula in the early afternoon. I promptly escorted them to a beautiful view of Lake Michigan at Ellison Bluff State Natural Area before we dined at JJ’s LaPuerta of Sister Bay.

4_Saturday morning began with a round of golf at The Red Putter in Ephraim – boys versus girls. I bested the badger and fell victim to the lighthouse bridge. The girls lost, but we couldn’t beat our father, it was Father’s Day weekend after all. 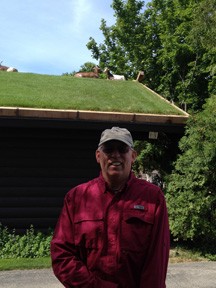 5_Beer Fest beckoned us south to Baileys Harbor – where the festivities were in full swing. A few grabbed their commemorative tasting glasses and partook in some sampling. A few others grabbed sliders, tacos, and cherry crisp to enjoy while watching live music by Highland Road followed by a performance by Evan Murdock and the Imperfect Strangers.

6_After some naps, we headed north to The Shoreline in Gills Rock for a delectable dinner (I recommend the lasagna loaded with delicious fresh vegetables and a light, summery cocktail called ‘Strawberry Field’). Dessert: homemade ice cream from the Door County Ice Cream Factory.

7_Dad’s request for his Father’s Day brunch: pancakes at Al Johnson’s in Sister Bay. He has to see those goats-on-the-roof at least once when he comes up for a visit!