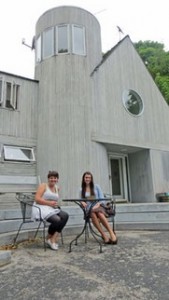 1. Just as I had begun to clear out my register after another busy evening of greeting and seating, a gruff voice addressed me from behind. I whipped around in a panic, but fortunately, there was no malcontent man to be seen; instead, I was met by my aunt and visiting Chicagoan cousin, and soon we were all enjoying a few drinks at the bar. Unfortunately, having celebrated my 21st just two weeks before, I had to endure some teasing about this very recent entry to adulthood.

2. Later on, we trekked in trio onto my Auntie Anne’s porch with an abundance of comforters and cushions, got cozy, and admired the full moon and few emerging stars for a while – until our words grew few and our eyelids heavy, when we figured it was high time to hit the hay.

3. Come Saturday morn, my cousin Sandy and I ventured further north than usual to check out a coffee shop in Gills Rock. After a whole 11 months apart, we had plenty to catch up on as we nibbled away at our bakery treats and nursed our beverages.

4. To compensate for the day’s languid beginnings, Sandy and I left for the Door Bluff Headlands in Ellison Bay. There, we picked a path down to the shoreline, which featured a collection of rock cairns and a driftwood hut, and then hiked along the bluff a bit as well. We were only mildly munched by mosquitoes.

5. Finally we stopped by the Savory Spoon, where my aunt works. When we had finished browsing the shop’s eclectic, aesthetic kitchenware, she set out a veritable feast for us with leftovers from the morning’s class, complete with a delicate dessert of the school’s famed Panforte, accompanied by Belgian chocolate chips.

6. Sunday brought me, my grandma, aunt and cousin to Sister Bay’s Church of St. Rosalia for Mass. Father Art gave a brief homily so that a sister from Green Bay could tell the story of her community’s missionary efforts in Peru.

7. With souls sufficiently nourished, the four of us hurried on to the White Gull Inn to feed our stomachs as well. We got the best spot in the house, with a corner-window view of the verdant gardens and courtyard outside. The afternoon yielded several other pleasures before it was over, including a stroll to Sunset Beach, a drive down Cottage Row, and a winding tour through Peninsula State Park. Sadly though, evening’s arrival meant Sandy’s departure, back to the Windy City whence she came. I miss her already!