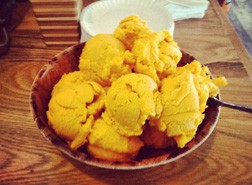 1. After a two-month hiatus from serving fantastic Old Fashions and delicious fried fish at The Cornerstone Pub in Baileys Harbor, I tied the black apron around my waist and took up a serving tray on Friday night. I was a bit rusty at listing off the potato options, but had a great time catching up with coworkers and regulars. 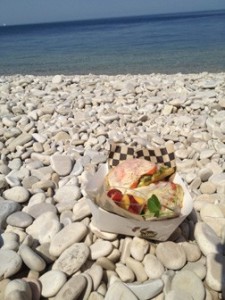 2. I dragged my sore feet to a friend’s bonfire up the road following my shift and collapsed in an andronik chair.

3. The sun beckoned me to the beach on Saturday. I grabbed an iced coffee and fresh, tasty Caprese Tartine from Base Camp Coffee Bar in Sister Bay to enjoy between soaking up some vitamin D and swimming in refreshing, beautiful blue Lake Michigan. 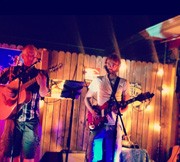 5. I traded in my damp swim suit for a summer dress and caught The Nicks performing chill favorites and timeless tunes – such as Talking Heads’ “Psycho Killer” – at The Garage while Door County favorites Hoi Polloi set up inside Husby’s.

6. Clouds overtook the sky on Sunday. Fellow Peninsula Pulse employee Carol Thompson and I swung by Good Eggs for an omelet burrito and steaming cup of coffee to enjoy on our way to Green Bay. Why go to Green Bay? Carol has never been… 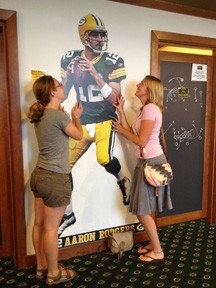 8. Not only that, but Green Bay is home to the Green Bay Packers – arguably the greatest football team in the whole wide world.

9. After a stimulating day in the big city, I pulled into Camp David and took in my first performance by the wildly talented and mildly crazy Jimmy Davis. 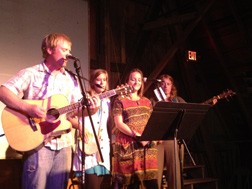 Intermission entertainment was provided by Thistle Dew and the Bohemian Space Orchestra, a band made up of current Camp David “campers,” who performed folk tunes and familiar favorites such as Tracy Chapman’s “Revolution.”