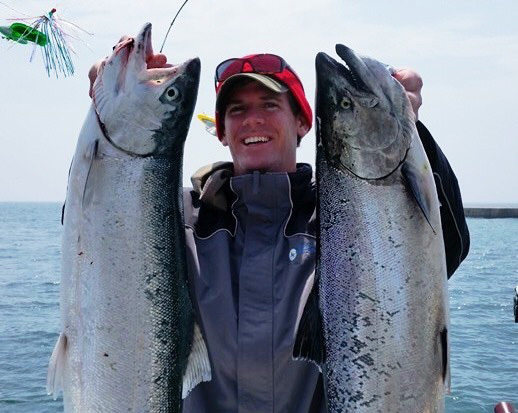 Jack fell into my office with all of the bumbling urgency of Kramer.

“A fishing dude,” he said, with his southern drawl.

Jack explained, “Well… I met him by chance at his place of work, and talked to him for a few minutes. He seems nice; he likes to fish so he’s got to be a good man. You should go salmon fishing with him in Sturgeon Bay.”

The proposition seemed a little odd, and I usually prefer to know a man’s name before I sit across from him for seven hours, but Jack’s enthusiasm was persuasive. He scrambled to produce a scrap of napkin from his pocket. “Here, call him right now.”

I talked to the guy on the phone, who seemed just as Jack described: liked to talk about fishing and was pleasant. The outing was set for 3:30 the next morning, which meant getting on a boat under the dark night sky, and traveling several miles off of the coast with a complete stranger. Sure, why not? I politely asked him if he would be at his boat that day, so that I could introduce myself and learn the location of the boat. We met and everything checked out.

We went out the next morning in a dense fog. As I approached the boat, the low rumbling of the boat motor could be heard from one hundred yards out but the craft could not be seen until about twenty. I squinted to make out the captain’s face, as it shone blue from the electronics glowing in the fog.

The waters were very agitated and the lake was jagged. Neither of us had bothered to check the wave report. The waves seemed to coalesce out of the dense moist air, one after another, and not appearing until they were nearly underneath us. “Sorry to say it, but we need to turn around,” the captain hollered over the boat motor and wind. I tried to hide my disappointment as he struggled to turn the boat around still under the cover of darkness. As we glumly made our way back, another boat headed out for the lake passed us and did so confidently. An inquisitive look appeared on the captain’s face, and he asked me if I was OK to go back out and give it a shot, mentioning that he would be upset with himself if he didn’t at least give it a go.

We fished, and the fishing, while not easy, was very good. Then, as the fog thinned to a morning haze, a horizon of blue sky materialized. An hour later, the sun made its glorious debut and the waves calmed in its presence.

I’m guessing if we had checked the weather report we wouldn’t have gone out. I’m glad that we didn’t.

The weather for this weekend:

The only thing that I can tell you for certain…there will be weather.

Friday’s forecast is dependable, sunny with highs in the low 70s.

The rest of the weekend is more challenging to get a read on temperatures. Most weather chatter has centered on the unreliable temperature predication for Saturday; which is dependent on the timing of an approaching cold front. If the front takes its time getting here, it will allow warm winds from the SW to dominate in Door County; if such is the case there may be some severe weather Saturday night. Saturday, max high temperature of 75 degrees with a liberal swing of 10 degrees plus or minus, again depending on timing of the cold front. Clouds on and off throughout the day.

Sunday, calls for cooler temperatures with the passing of the cold front, which is actually more like a cool front; temperatures dropping into the mid to high 60s.

Growing up in Michigan, Ryan Heise began keeping a fishing journal detailing the weather conditions at and can still recall his hometown weatherman’s name. His fascination with weather has never wavered and began to heighten when planning surf trips while living in Florida. Now proud to call Door County home along with his wife Mary and dog Ruby, he has found a new fascination with the unique microclimate of Door County.