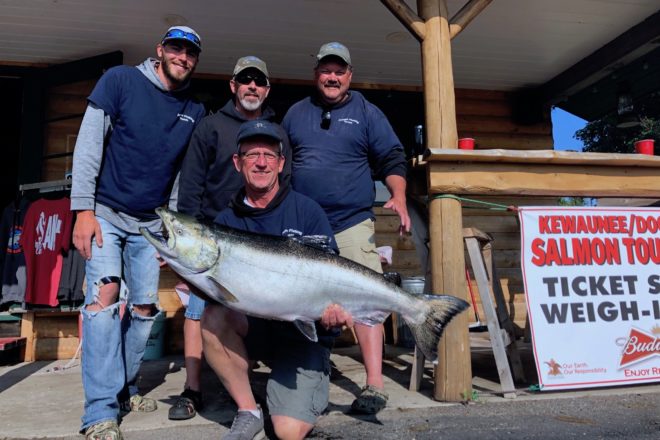 Anglers caught the heaviest chinooks since the 1990s in this year’s Kewaunee/Door County Salmon Tournament. There were 13 heavier than 30 pounds that were officially in the money, plus a half-dozen others taken to official scales with no tournament ticket.

A trio of Door County graduates topped the list of winners in a contest that lured more than 2,600 anglers to the peninsula. Josh Kramer of Kaukauna placed first with a 40-inch, 36.7-pound chinook that hit a Howie Fly off Baileys Harbor July 23, just 10 minutes into a late-afternoon outing.

“It was just like shooting a big buck,” said Kramer. “We were nervous [when we first saw it]. It’s 20 yards from the boat and just sitting there, flopping around.”

Kramer won $10,000 cash, a free mount of the catch and a custom-made salmon ring from Wisconsin Charm.

Second place earned $6,000 cash and a Howie’s Tackle rod/reel combo package for Gary Welch of Sturgeon Bay. His 34.27-pounder bit a Howie Fly off Rock Island earlier that day. More on that in a moment.

Third place – $4,000 and a $200 gift certificate to Accurate Marine & Tackle – went to Keith “Buck” Felhofer of Sturgeon Bay for his 33.59-pound king taken opening morning of the 37th annual contest.

Felhofer was solo when he brought in a 26-plus-pound pike through an eight-inch hole in the ice earlier this year, but he had help with him July 19 when he was aboard Mark Stoeger’s 21-foot Crestliner out of Baileys Harbor. The fish hit a magnum Pro King.

Welch, meanwhile, had retired a week prior to the tournament. He was talked into fishing after nearly 15 years away from the sport by brother-in-law Doug Petersilka of Sturgeon Bay and nephew Nathan Petersilka of Kewaunee.

On opening day, Welch reeled in a lifetime-best, 23-pound-plus brown trout, nearly doubling his previous best taken through the ice of Egg Harbor. Four days later, with the Petersilkas’ friend Steve Ravet of Luxemburg also aboard, Welch hit the jackpot with a 42.75-inch, 34.27-pound chinook.

“The three names on that sheet, they’re my heroes,” said Welch. “I’m not taking a penny [of any prize money]. “They earned it, not me.”

He continued, “I used to be a good fisherman, but now I’m pretty much a spectator, at least until they talked me into coming back and handed me a rod when my turn was up.”

Nathan Petersilka started the morning with a 20-pounder. Around 6:30 am, the big one hit. Welch was up to bat – and hit it out of the park.

“I don’t want to put all these hard-core, die-hard fishermen to shame, but you want to talk about beginner’s luck,” Welch said. “It sure was exciting.”

The epic battle went on for about 45 minutes before the trophy came to net, then hit the deck. One look at it, and they knew it was time to head back to shore for an official weight.

With salmon and trout finding plenty to eat, many anglers are hoping the DNR raises more chinooks for release in 2020.

Yellow perch action heated up right along with the weather, and there’s been a wide variety of sizes available. Many anglers are keeping fish seven to 11 inches, with an occasional jumbo a foot long or more.

Smallmouth bass are very active in five to 15 feet of water. Nightcrawlers, fatheads and leeches work well, but most die-hard catch-and-release fans prefer soft plastics or a variety of hard lures, including topwater baits, crankbaits, spinnerbaits and plugs.

Walleye action has been good most days in the stretch from Dyckesville to Chaudoir’s Dock. There are also fish scattered northeast of there, mainly around reefs, points and deep weeds. Trolled spinner and live-bait combos or crankbaits are favored, but you can drift or anchor and jig, or slip-bobber over structure, too.

Bluegills, crappies, sunfish and rock bass are active in many harbors and marinas, and northern pike and the occasional muskie can be found around reefs and weed beds or cruising shipping channels.

Top chinook catches are coming on flies, spoons and plugs trolled in 80 to 180 feet of water. Rainbow and lake trout are also being caught, mainly in 120 to 240 feet of water or more.