On New Year’s Eve in Times Square, thousands will gather in the streets to witness the spectacle that has ushered in nearly every new year since 1908. The Times Square Ball, a geodesic sphere measuring 12 feet in diameter, weighing 11,875 pounds, and glowing with 32,256 Philips Luxeon LEDs, will descend 141 feet during the final minute of 2017 and usher in the New Year.

One hour later, on a wintery peninsula a thousand miles away, Jaime Forest and Mike Mesic of FM106.9 The Lodge will lead a countdown to a scaled-down, regionally appropriate version of the Times Square Ball:  the inaugural Cherry Drop in downtown Sister Bay.

The centerpiece will be a six-foot-tall spherical cherry designed by Forest’s brother, metal artist and electrical engineer Corey Corbisier. Dressed in hundreds of red LED lights and a 2018 banner, the metal cherry will be hoisted by a crane 115 feet into the air near The Garage at Husby’s and await the final countdown to the New Year.

Mesic has long dreamed of putting a Door County twist on the ball drop tradition that has become part of many New Year’s Eve events across the United States, from The Great Pinecone Drop in Flagstaff, Arizona, to the Pineapple Drop in Sarasota, Florida. With 2018 marking the 10th anniversary of The Lodge’s on-air presence in Door County, Mesic decided it was an appropriate time to make his dream a reality.

While they had the backing of Husby’s, the Sister Bay Bowl, and Sister Bay Advancement Association coordinator Louise Howson, it was the fortuitous discovery of another Midwestern event that has proven pivotal to the local undertaking. 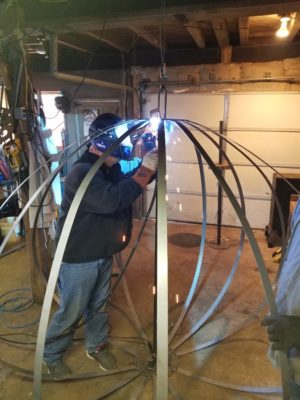 Cherry “fabricator” Corey Corbisier welds the frame of the six-foot, metal cherry that will usher in the New Year in Sister Bay on Dec. 31. Submitted.

“Over the course of doing this, they’ve raised about $60,000 for local charities,” Forest said. “That’s awesome, so we’re going to mimic some of their successes and our charity partner this year is going to be Door County Secret Santa.”

Including a charitable aspect in the Door County Cherry Drop isn’t the only way Traverse City has inspired the local organizers – they’ve also given advice on constructing the giant cherry ball.

The “cherry fabricator,” Corey Corbisier, is familiar with large-scale, metal work. This project will be the cherry on top of a design resume that includes the giant, metal squids that hover above the bars in Nakashimi of Japan’s Green Bay and Appleton locations.

“I’m always excited about projects,” Corbisier said. “I’m definitely pumped to see how things go…I hope it’s a big thing and hopefully they can keep it going. That’s the whole point of making this. Honestly, this is just the trial run. I’m hoping to make things bigger and better for 2020. That’s going to be a big undertaking the next couple of years.”

If all goes according to plan, keep an eye out for a giant cherry next to Husby’s in the days leading up to New Year’s Eve.

The Cherry Drop will close out the 4th annual New Year’s Eve celebration in Sister Bay, which includes a fireworks show at the waterfront at 8pm and ice skating at the Sister Bay Sports Complex (weather permitting).

The Cherry Drop portion of the evening’s activities begins at 10:30pm. The Lodge will warm up the evening with a live DJ playing the biggest party tunes of all time and a live broadcast from both Husby’s and the Sister Bay Bowl. For more information, visit cometosisterbay.com.