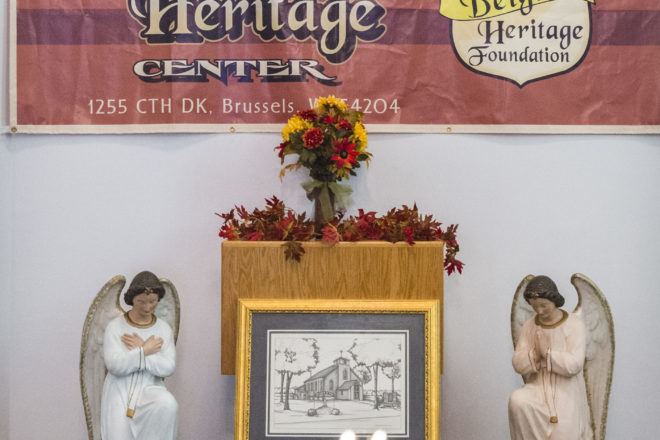 Booyah, trippe, jutt – these words may not sound familiar to many, but they evoke images of traditional, hearty Belgian food to those in southern Door County, where Belgian history and culture is celebrated.

All are welcome to an upcoming annual celebration of this Belgian heritage. The Belgian Heritage Center in Namur is hosting its annual Belgian Kermiss Aug. 20 from 11 am to 4 pm. A Kermiss – which is a combination of the Dutch words for church (“kerc”) and mass (“misse”) – is a traditional Belgian harvest celebration that brings together the entire community and features Belgian food, beer, music and camaraderie.

The Belgian Heritage Center in Brussels. Photo by Len Villano.

“The Kermiss in Namur has been taking place for well over a hundred years,” Jinkins said. “The first Kermiss took place in 1858 in Rosiere.”

Jinkins said Kermisses were traditionally celebrated in Belgian communities in consecutive weeks before Labor Day and extending into October. Belgian settlers who made their homes in southern Door County and parts of Kewaunee and Brown counties continued this tradition. Each celebration began with a Catholic mass followed by gatherings in homes, taverns and dancehalls. Relatives and friends from surrounding areas would visit to enjoy the abundance of food.

Kermisses are not as common in the Belgian area of Wisconsin today, with Kermisses occurring only in Namur, Champion, Brussels and Lincoln/Rosiere.

“Our Kermiss will be the earliest of the season,” Jinkins said. 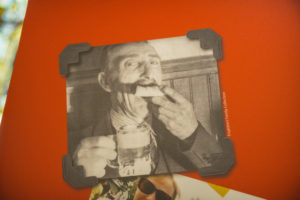 A variety of Belgian foods will be front and center at the Belgian Kermiss. Visitors can look forward to enjoying booyah (chicken soup), trippe (sausage stuffed with cabbage and Belgian spices), jutt (fried cabbage), Belgian pies and tortes. In addition, hamburgers and old-fashioned ice cream made on-site using a tractor’s power drive will also be for sale.

The food served at the Belgian Kermiss is steeped in traditions of families coming together and making plenty of food, especially huge numbers of Belgian pies.

“These recipes have all been passed down,” she said. “Families would make literally hundreds of pies for all the relatives that would stop over.”

Volunteers cook and make the food for the Belgian Kermiss, and plenty of food is usually needed, said Barb Maskell, a board member of the Belgian Heritage Center along with her husband, John.

“We’re ordering 55 pounds of hamburger but 125 pounds of trippe and hope we don’t run out,” she said, adding they make 500 gallons of booyah and sold all 90 pies they made last year. Maskell expects to sell more than 100 at this year’s festival.

“Booyah is a very hearty soup that stands alone as an entrée and quite often might be served with fresh bread and cheese,” Maskell said.

Maskell said the addition of cabbage to trippe “holds in flavor,” and sales of trippe usually are more than double the sales of burgers.

Jinkins said the trippe and pies tend to be the most popular items. The pies are smaller than typical pies found in bakeries today, and popular varieties include prune pie and rice pie in addition to standard fruit pies.

In addition to food, Belgian beers and drinks will be offered at the Kermiss, and the celebration will feature an antique farm implement display, live rock, country and pop music by the Mad Cats, and a bucket raffle.

There is no admission fee to the celebration, but proceeds from food, drink and raffle sales will benefit the Belgian Heritage Center and its ongoing projects, which include an effort to make the center more accessible to older and handicapped visitors.

Above all, the Belgian Kermiss will offer attendees a chance to enjoy Belgian food and heritage. For Maskell, who grew up in Rosiere, each Kermiss brings back fond memories of childhood and helping out at the celebration.