There’s more than the snow that goes into ski conditions. Good snow is, of course, an important part of a good run. But after the snow blankets the bluffs, who makes the trails look so clean-cut and pretty?

But as with anything used by visitors and residents alike, cross-country ski trails require maintenance in keeping the conditions good enough to draw skiing enthusiasts. For most Door County ski spots, this job falls on volunteers at the state parks. 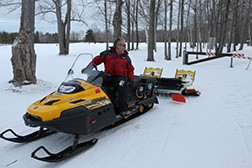 “We like to do it early morning or late evening so we can set up the tracks before the skiers get on them,” said Greg “Fuzzy” Sunstrom, a leading trail groomer at Peninsula State Park. “If we can get out late, then the tracks can set overnight and will hold better throughout the day.”

The process of grooming involves a powerful engine pulling a heavy sled over the trails. The volunteer groomers at Peninsula State Park use a Skandic snowmobile to drag various sleds over the trails depending on the kind of trail they want to groom.

When speaking of cross-country skiing, there are two primary categories to consider. Classic skiing is typically more popular given its similarity to a walking or running gait. The ease with which classic skiing is picked up by novices makes it the more common of styles. Classic ski trails are evidenced by two cuts in the snow about five inches apart in a groomed trail that help a skier keep a controlled forward movement.

The other category is skate skiing and it involves a gliding stride, which is often faster and more physically exhausting. This fact makes it less appealing to beginners. Skate skiing can only be done on groomed trails that have a rippled surface, otherwise known as “corduroy surface.” The ridged surface catches the skis as they glide along, preventing the blades of each ski from sliding too far to the side.

Most competitive skiers lean toward the skating style for the physical challenge and faster pace. Many skiers on the peninsula would like to see more effort in promoting the top-end ski trails as opposed to solely the recreational skier.

“In a lot of promotional photos, they have the guy skiing in blue jeans,” said Brian Fitzgerald, who helps in grooming the Peninsula State Park trails. “We need to show that there are some serious competitive skiers up here as well.” 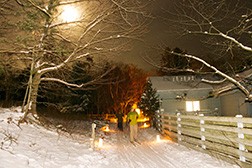 Still, the recreational skier is where tourism gets its push. “It’s one of the opportunities to enjoy Door County in the wintertime,” said Jon Jarosh of the Door County Visitor Bureau. “If conditions are spectacular we will send out a regional press release letting people know that snow conditions are great.”

Whitefish Dunes State Park hosts a twice-annual candlelight event where visitors can hike or ski the trail lined with luminaries. “A lot of people like to come out and enjoy the ambiance of the luminaries,” said Fred Viste of the state park office in preparation for their next candlelight ski on Jan. 31. “It’s a different side of the park that you get to see when the trails are lined with candles as opposed to just darkness,” said Viste.

As cross-country skiing increases in popularity, both skate skiing and classic skiing are beginning to get a larger following. The groomers work to provide trails for both disciplines.

The Ginzu groomer used by the volunteers at Peninsula State Park creates the corduroy surface as well as the tracks used by classic skiers. A drag sled helps level the surface, carrying the snow from high-drift areas and depositing it in shallower parts of the trail. Finally, the snow rollers are used to compact deep snow, creating a firmer surface on which to ski. 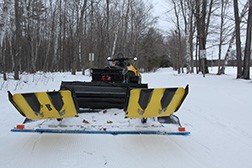 “You want to have moisture so the snow packs,” said Fuzzy. “But if it’s warm it gets icy.”

“When it’s cold and there’s new snow, that means it’s slow snow,” said Fitzgerald. The sharp, crystalized snowflakes mimic glass and it sounds as though you are walking on Styrofoam, explained Fitzgerald.

With conditions as they are now, the groomers and skiers are limited to the closed roads in the parks instead of the less-traveled trails. Roads already provide a flat surface on which to build a groomed route while, “trails have roots and rocks and grass so you have to fill up that void first before you fill in the trail,” said Fuzzy. In Peninsula State Park, visitors can ski the groomed trails on Skyline, Middle and Hemlock roads.

Most trails in the state parks were originally designed for logging and did not have cross-country skiers in mind when they were constructed. This created a rough surface, which, while interesting for hikers, needs 4-6 inches of snow cover before it can be groomed and skied. On a good snow year, Door County is understood to be a premier cross-country ski location, even serving as the training grounds for teams out of Green Bay.

The broader Midwest boasts some of the best cross-country skiing in the country, aided by the popularity of the American Birkebeiner ski race in Cable, Wisconsin. The race, taking place the weekend of Feb. 19 this year, consists of a variety of distances from 12 to 54 kilometers. More than 13,000 people participate and it is known as one of the premier ski events in the country.

The Birke, as it is known, is named after the a group of Norwegians that were trusted to transport the King’s illegitimate child to safety by traveling through miles of forests and mountains on birch bark leggings. A few Door County residents have participated in the Birke and use the trails in the county as their training grounds for the competitive event. 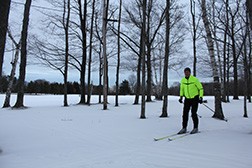 “I mainly ski at Peninsula State Park,” said Fuzzy, who admits to being biased, as he is the primary trail-groomer at the park. Fuzzy has competed in the 34-mile Birke event each of the past 22 years. “Door County has a fair contingency that does the Birke,” said Fuzzy, “but this is the first year in 23 years that I won’t be doing it,” opting instead for a visit to Florida.

The DNR is in the process of rolling out a new master plan for Peninsula State Park that will need to address many issues that have come up since the current plan’s approval in 1981.

“When the original master plan was written, kayaking didn’t even exist,” said Fitzgerald. Now, with increasing participation in outdoor activities like cross-country skiing, fat biking and snowshoeing, the DNR will need to address the issue of a variety of disciplines using the same trail system. Despite such an increase in winter recreation, cross-country skiing is still seen as the most popular activity throughout the county’s state parks.