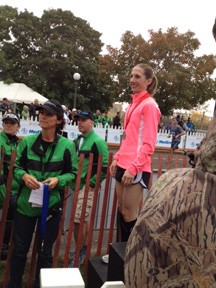 Wendi Ray of Sister Bay finished secoond in her class at the USA Masters Marathon Championship held during the Medtronic Twin Cities Marathon on Oct. 6.

After a nearly three-year hiatus from competitive running, Wendi Ray of Sister Bay made an impressive appearance in the 2013 USA Masters Marathon Championship held during the Medtronic Twin Cities Marathon on Oct. 6, finishing second in her class and 12th overall of the 3,931 women running, with a time of 2:40:37.

“I hadn’t raced in almost three years, so I wasn’t sure what was going to happen,” she said. “I trained really hard and trying to train amongst all the jobs I have.”

She works as a speech therapist, a server at her husband Linden’s Mink River Basin Supper Club, and as a baker at the couple’s Ellison Bay coffee shop, Brew.

“I just thought, ‘we’ll see how it goes’,” she said of her 90-mile-a-week training regimen for the USA Masters Championship. “My training went really good. The summer weather was wonderful. I went in thinking, whatever happens. I had no expectations.”

Ray had been training for the 2012 Olympic trials, but injured her knee a week before the trials.

“I took a year off to heal my knee and just mentally take a break from heavy training and enjoy running again,” she said.

Taking second in her age category and 12th overall, and 84th among the total of 8,856 runners proved to her “that I still have it,” she said. “It reassured me that even though I turned 40 this year, that was my third best time ever. In the end, I really enjoy it.”

She has already set her sights on running the U.S. Championship again next year in the Twin Cities Marathon.

“I have a really strong faith. In the end God made it possible,” she said. “I know it sounds corny to some people, to me that’s how I keep going.”